Point-of-care testing in global health: what is the point?

In the realm of global health diagnostics, the dominant definition of point-of-care (POC) testing is product-oriented, and focused on characteristics such as simplicity, low cost, and ability to perform outside a laboratory. We need a goal-oriented definition of POC testing.

Diagnostics are a critically important aspect of global health. Last week, I was happy to receive a copy of a new book that I contributed to. This book, 'A Practical Guide to Global Point-of-Care Testing,' edited by Professor Mark Shephard from Flinders University International Centre for Point-of-Care Testing, provides a nice overview of POC testing in various settings, across a range of conditions.

But what exactly is POC testing? In the realm of global health diagnostics, the dominant definition of POC testing is product-oriented (e.g. POC tests are dipsticks or lateral flow assays that do not require equipment), and focused on characteristics such as simplicity, low cost, and ability to perform outside a laboratory.

We recently argued for a goal-oriented definition of POC testing. We proposed that rapid initiation of correct treatment is the most critical goal of any POC testing, and suggested an alternative definition: POCT is diagnostic testing that will result in a clear and actionable management decision (e.g. start of treatment, referral, initiation of confirmatory test) within the same clinical encounter (e.g. same day).

POC testing, we argued, is not defined by technology per se, but by the diagnostic process. It is important to think in terms of POC testing programs or strategies, rather than POC technologies. The success of a POC testing program must be measured based on the extent to which the rapid completion of the ‘test-and-treat’ cycle in the same clinical encounter is achieved in real-world settings.

Healthcare systems that choose to implement any test in a POCT program will have to make investments beyond purchasing rapid tests – they need to ensure a system for rapid communication of test results to patients and care providers, and a system to rapidly initiate treatment.

Unlike the standard definition which creates a rigid dichotomy between POC versus laboratory tests, we argued that POC testing should be viewed as a spectrum: of technologies (simplest to more sophisticated), users (lay persons to highly trained), and settings (homes, communities, clinics, peripheral laboratories, and hospitals) (Figure). 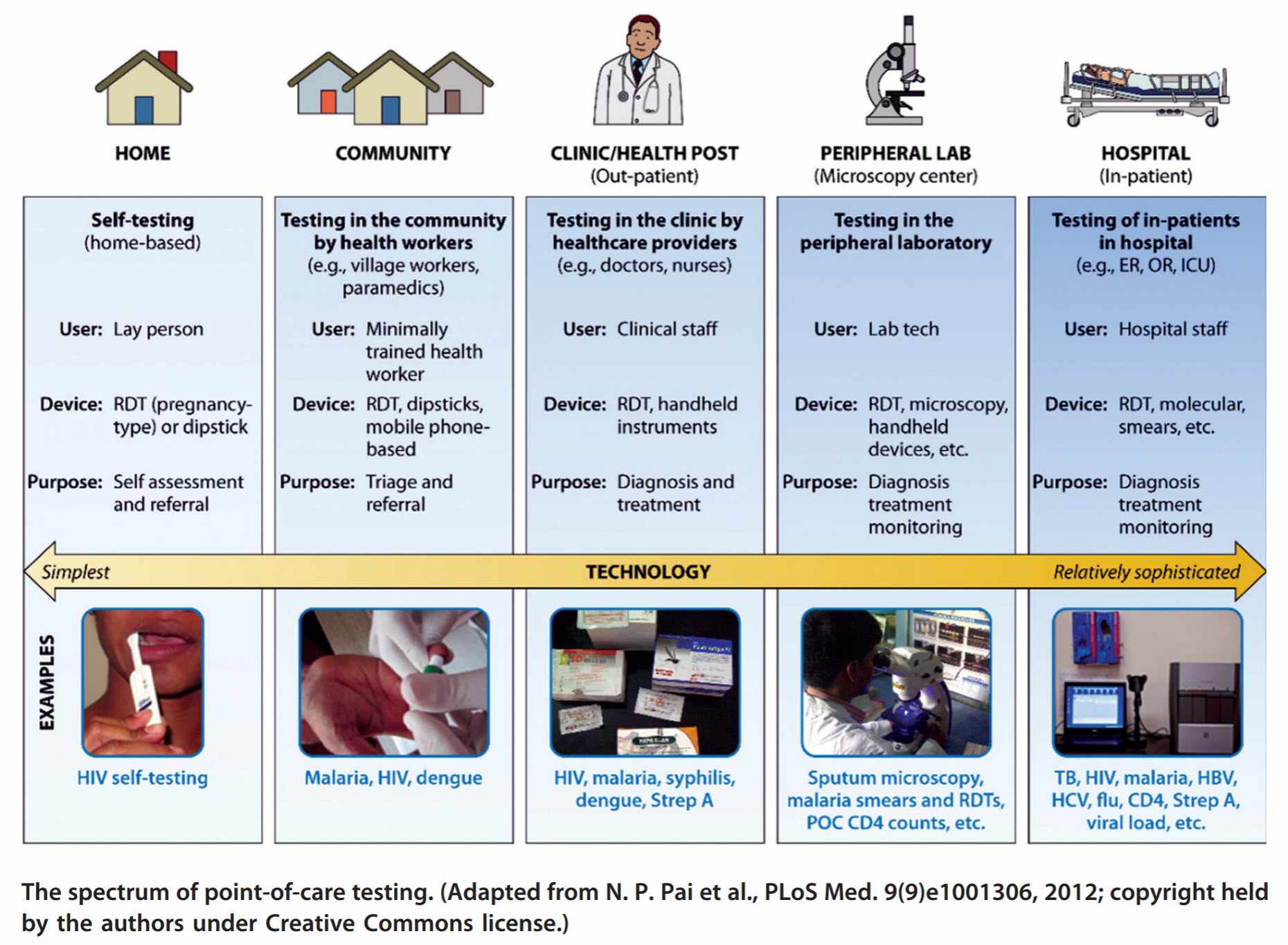 By framing POC testing as a spectrum and de-emphasizing the traditional product-centric view, we suggest our approach is more inclusive and will allow more industries and test developers to develop a range of products that may be amenable to use by POCT programs. It may also inspire healthcare systems and donors to think beyond just procuring rapid tests, and ensure that technologies get implemented as POCT programs.

You can read more here:

Back to Under the microscope
Next

I am a Professor and a Canada Research Chair in Epidemiology & Global Health at McGill University, Montreal. I serve as the Director of McGill Global Health Programs, and Director of the McGill International TB Centre. URL: http://www.paitbgroup.org/

DIARY: Locked down, but not out
Contributor
Under the microscope