Science on ice: microbes and mercury in Antarctica

The story of the voyage behind the paper.

In 2012, I was fortunate enough to land a research spot aboard the Aurora Australis as part of the second Sea Ice Physics and Ecosystem eXperiment (SIPEX-2). The voyage consisted of 50 scientists from eight countries, living and working on board the icebreaker, undertaking research aimed at investigating relationships between the physical sea-ice environment, marine biogeochemistry, and the structure of Southern Ocean ecosystems. From this surreal experience came my PhD project, studying the biogeochemical cycling of mercury (Hg) in the Southern Ocean across the sea-ice environment. This work cumulated into an interdisciplinary study with local and international collaborators entitled “Microbial mercury methylation in Antarctic sea ice.”

This project was motivated by the intersection in interests of my two supervisors, Dr. Robyn Schofield, an atmospheric chemist, and Dr. John Moreau, a geomicrobiologist. Dr. Schofield is intrigued by the polar phenomenon known as Atmospheric Mercury Depletion Events (AMDEs). AMDEs often occur in polar regions in springtime, when large volumes of bromine oxides (BrO) are released from sea-salt accumulated on first year sea-ice. BrO is so reactive that it drives the oxidation of Hg(0), which is usually pretty stable, to the more reactive Hg(II). The result is a large-scale deposition of reactive Hg species onto sea ice and seawater. This occurs at a time when sea-ice extent is near maximum, and the sea-ice microbial community that drives much of the primary production in the Southern Ocean is about to take-off. Dr. Moreau is interested in what happens to the Hg once it is transferred from the atmosphere to the snow-ice-seawater continuum, where it can undergo various photochemical and microbial transformations. One such transformation is the microbial methylation of Hg. Methylmercury (MeHg) is a potent neurotoxin, that readily bioaccumulates in higher trophic organisms. Motivated by these two aspects of the Hg biogeochemical cycle, I was sent on the two-month voyage to collect total gaseous Hg measurements above the sea ice (to capture AMDEs), and to collect snow, sea ice, brine, and seawater samples for total Hg and MeHg measurements and DNA for a genomic study investigating possible microbially-catalysed Hg transformations. 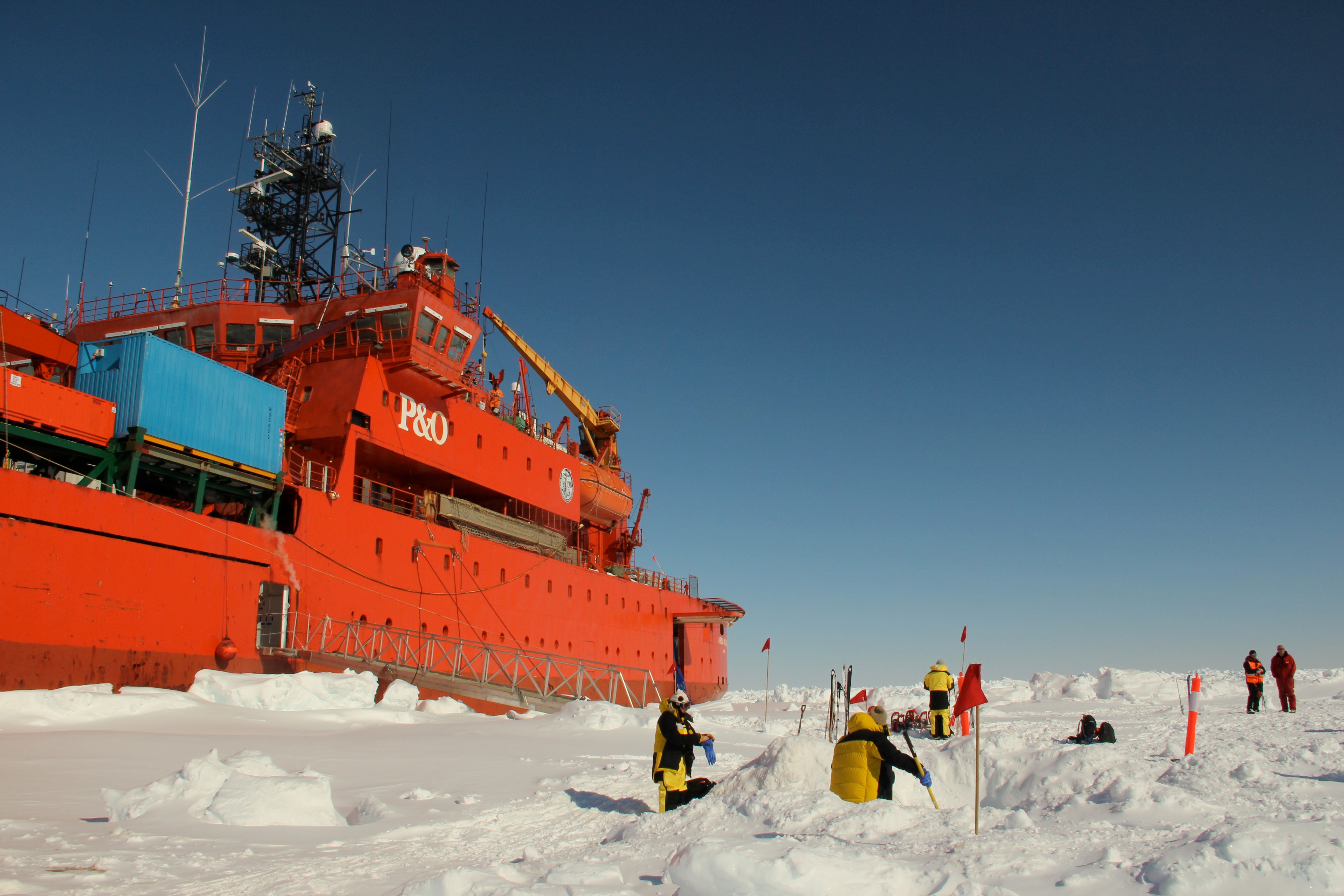 Personally, I have always been intrigued by Antarctica, and have dreamed of conducting research at an Antarctic base ever since I watched Werner Herzog’s documentary, Encounters at the End of the World. Admittedly, this was the most exposure to Antarctic research I had prior to SIPEX-2, having never spent an extended period of time in polar-regions or on board a ship. My previous fieldwork experience had been at abandoned Hg mines and geothermal sites. Interesting places to visit and sample, but not so remote that you can not run off to the hardware store if needed to jerry-rig some equipment in the field. Preparation for two months at sea with no second chance for sample collection definitely increased the fieldwork stakes. Like myself, many of the students aboard had never sampled sea ice, and for the first time would be traversing south of the Antarctic Convergence. Luckily, we were in the company of experienced researchers, supportive crew, and a well-equipped ship. I am truly fortunate that my first experience in Antarctic fieldwork was part of a multidisciplinary research voyage. The research I was exposed to on board and on the ice, from studies on larval krill to the physics of sea ice permeability, created a crash course in sea-ice science.

When asked what it was like living on a ship for two months floating in the ice just off Antarctica, I often describe it as living in a giant snow globe. The first time I used that description I was drafting an email to my family, ship-bound in the mess hall, due to a two-day blizzard raging outside. However, I think it is an apt description for the serenity and seclusion we experienced throughout the voyage. At times I would feel stranded, far away from the creature comforts of land, cut-off from social media and the 24-hour news cycle (admittedly more a blessing than a curse). I felt stuck in a picturesque scene of a flat snow-dusted horizon that went on as far as the eye could see, disrupted only by the isolated iceberg or occasional pride of penguins. There would be the freezing, but tranquil, days with clear blue skies, bookended by heavy snow and limited vision on the ice. Even after several weeks of the same scenery, the journey became no less surreal. 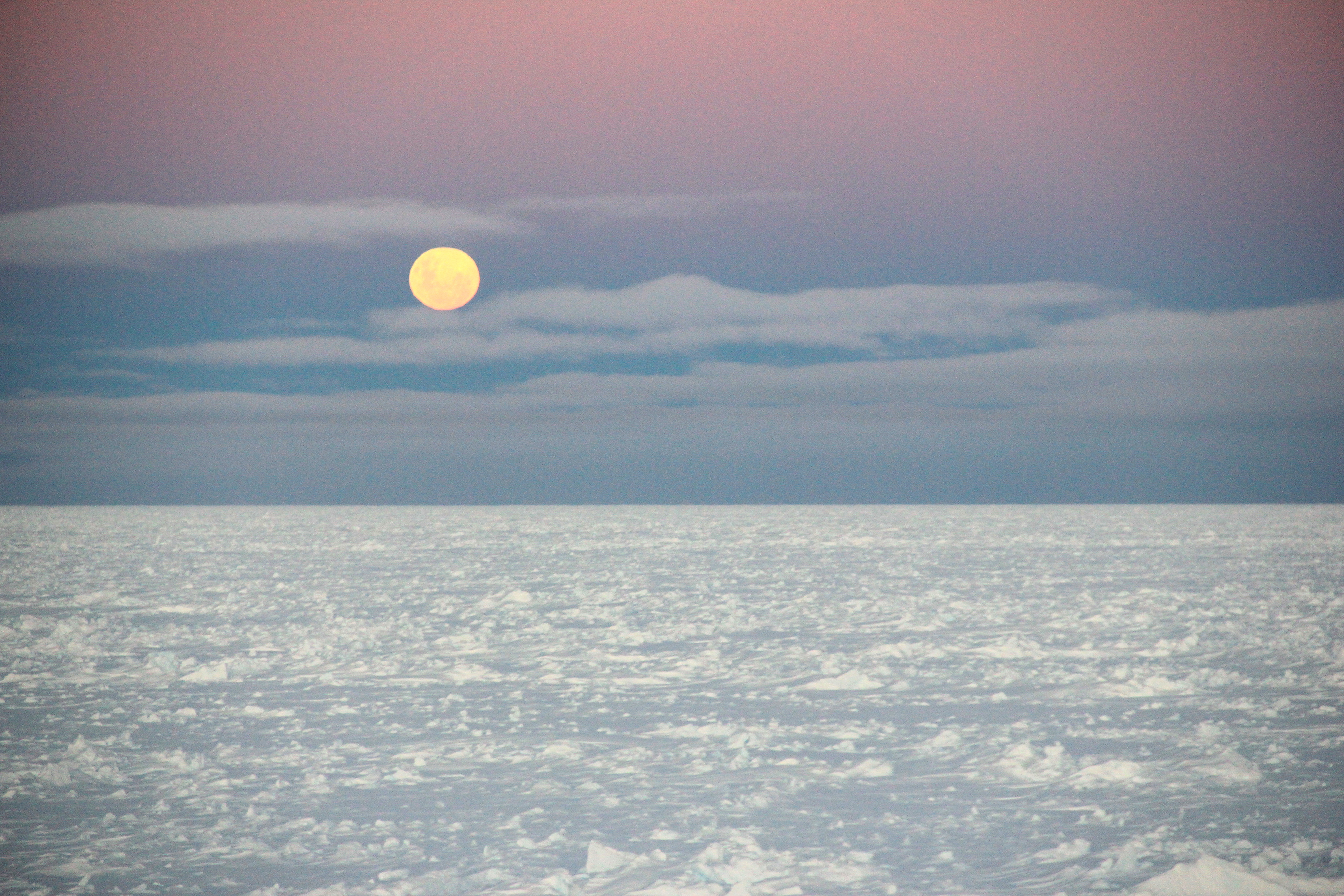 Some days would be spent in the various wet labs on board, prepping samples for analysis, or helping other students conduct experiments. Other days were met with challenges, whether it was troubleshooting the atmospheric equipment that did not appreciate the rough voyage across the Southern Ocean to the calm ice edge, or being told we had run out of coffee with three weeks left in the voyage. The best and toughest days were spent sampling sea ice and seawater, both for my own project and others. We would get off the ship and walk on top of the ocean, aided by a few metres of ice, and dig trenches in snow (sometimes up to 2 metres), manually carve cores of metre-thick ice, and drill holes to sample the seawater below. All the while hoping that the samples we have collected would prove promising upon analysis. Looking back on the experience there are things I would have tweaked. There are samples I wish I had taken more of, notes that could have been clearer in my logbook, and sampling equipment that could have been packed while in the calm ice-zone rather than in rough seas. Overall the voyage was a personal success, with both the research and experience proving invaluable. I am most grateful to the amazing people I had the privilege of spending two months with at the end of the world. Whether it was waking up in the middle of the night to try and catch a glimmer of the Aurora Australis (Southern Lights), risking a GoPro in the freezing Antarctic waters to capture an image of a Minke whale, or using Tyvek coveralls to slide on the ice like penguins, we learned how to balance tough work with fun. These types of research-only voyages are unfortunately few and far between, and I am extremely appreciative to have been a part of one. The experience has enabled me to envision future projects that could be conducted as part of research voyages or at Antarctic bases, and I am itching to get back South of the 60° parallel. 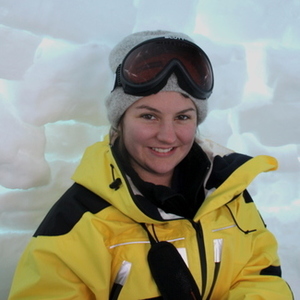