Integrating multiple "omes" from the microbiome: "small is beautiful"

"Who is there and what are they doing?" What started as an simple question during a summer internship as an undergraduate is still the central question which drives my research interests. Microbes are ubiquitous and their importance with respect to human health and the environment is now universally accepted. However, their actions in the wild are much less well understood. Activities depend on many factors and cannot be inferred by conjecture based solely on information about presence/absence and/or genetic potential. Hard evidence in terms of gene and importantly protein expression is required to really know what is going on.

"Who is there and what are they doing?"

What started out as a simple question during a summer internship as an undergraduate is still the central question driving my research interests. Microbes are ubiquitous and their importance with respect to human health and the environment is now universally accepted. Their prevalence and diversity have been extensively explored especially given advances in high-throughput sequencing. However, their actions in the wild are much less well understood. Activities depend on many factors and cannot be inferred by conjecture based solely on information about presence/absence and/or genetic potential. Hard evidence in terms of gene and importantly protein expression is required to really know what is going on. Integration of different data types is therefore essential as only by simultaneously looking at genetic repertoire, transcripts, proteins and metabolites will we really understand the function of distinct microbial populations in their native environments (Muller et al., 2013). Such knowledge is of course essential for ultimately manipulating microbial consortia by altering their ecology and gearing them towards desirable outcomes, for example in the context of the human microbiome to alleviate a dysbiotic state linked to disease.

Having developed and applied methodologies for obtaining functional insights into microbial communities on different systems ranging from biological wastewater treatment (Wilmes and Bond, 2004; Wilmes et al., 2008) to acid mine drainage biofilms (Wilmes et al., 2010), I took the plunge in early 2010 to return to my native Luxembourg through the ATTRACT research fellowship programme of the Luxembourg National Research Fund. Once arrived, I set about building up a group in molecular microbial ecology with an initial focus on environmental systems. We developed a methodological framework for conducting integrated omic analyses of microbial consortia. This framework includes the provision for systematically extracting concomitant biomolecules (DNA, RNA, proteins and metabolites) from single mixed microbial community samples (Roume, EL Muller, et al., 2013; Roume, Heintz-Buschart, et al., 2013) as well as in silico approaches for integrating the resulting omic data at the population-level without reliance on isolate reference genomes (Laczny et al., 2014, 2015). We subsequently applied these methods to obtain fundamental insights into the ecology of lipid accumulating microbiota in biological wastewater treatment systems, which served as our model system (Muller et al., 2014; Roume et al., 2015).

At the same time as setting up the lab, I followed the development of the newly established Luxembourg Centre for Systems Biomedicine (LCSB) at the University of Luxembourg. Following several discussions with clinicians in Luxembourg and having joined LCSB in October 2011, I decided that given my earlier assessment of the importance of function in microbial ecosystems, a broad functional focus may potentially allow us to contribute to the burgeoning field of human microbiome research.

In discussions with Carine de Beaufort (Figure 1), a pediatric endocrinologist at the Centre Hospitalier de Luxembourg, and Jochen Schneider, an endocrinologist at the Saarland University Medical Center who holds a joint affiliation with LCSB, we decided to carry out an in-depth investigation of the gastrointestinal microbiome in the context of type 1 diabetes mellitus (T1DM). Type 1 diabetes is a chronic, at times debilitating disease which requires a life-long treatment with insulin injections. Over the course of a lifetime, more than 100,000 injections and just as many finger-pricks are needed to prevent acute (low and high blood sugar levels) and more chronic complications (renal failure, blindness, cardio- and cerebrovascular events). Although genetic predisposition and autoimmune anomalies play a role, the cause of the disease is still unknown. The worldwide increase in the incidence of T1DM (Patterson et al., 2012), especially in individuals with a limited genetic risk (Gillespie et al., 2004), suggests that gene-environment interactions are at play such that external factors may trigger the auto-immune destruction of insulin-producing beta cells of the endocrine pancreas which results in T1DM. Gastrointestinal microbes have been implicated in this process due to the immunomodulatory role of the gastrointestinal tract (Atkinson and Chervonsky, 2012; Cabrera et al., 2016), and the potential involvement of the pancreatic ducts in the inflammation which ultimately culminates in beta-cell destruction (Rodriguez-Calvo et al., 2014). However, case-control studies of the microbial community structure prior to (Davis-Richardson et al., 2014; Endesfelder et al., 2014), during (Brown et al., 2011; Giongo et al., 2011; Endesfelder et al., 2014; Kostic et al., 2015) and immediately after (Murri et al., 2013; de Goffau et al., 2014) seroconversion, have tried but failed to identify generalizable disease-causing or biomarker organism signatures. 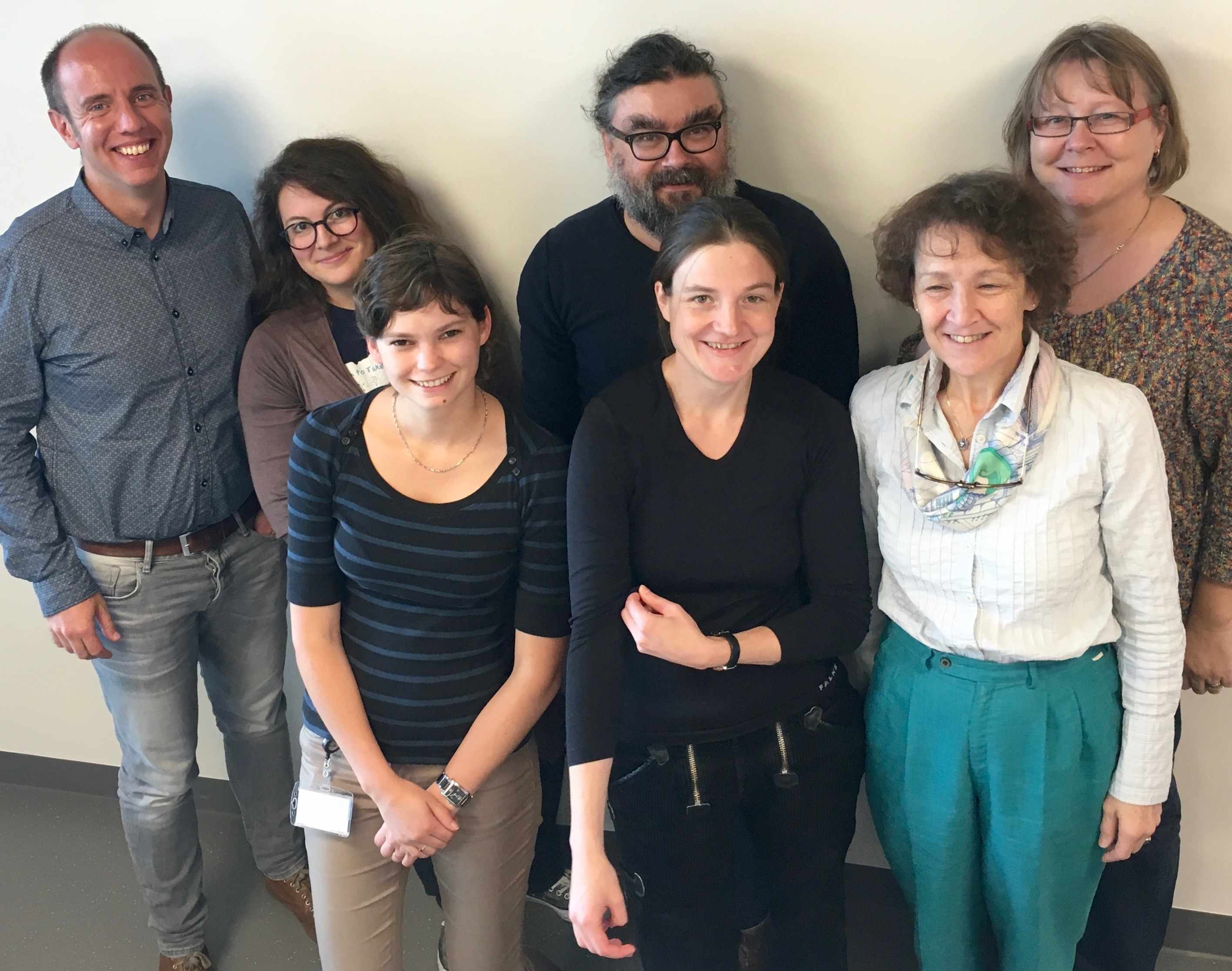 With our toolbox in hand, we set out to see whether we could identify functional signatures in the context of type 1 diabetes. In order to control for genetics and nutritional habits, which are known to influence the disease and the microbiome, respectively, we designed a multiplex family study focusing on families in which there is an incidence of type 1 diabetes but which also include healthy family members. We first focused our efforts on a pilot comprising four families. For each family member, the Integrated BioBank of Luxembourg collected stool according to our protocols (including immediate snap-freezing of stool samples and their preservation at -80 oC) on three distinct occasions to account for dynamic changes in the gut microbiota. Although the sample numbers might be considered limited in comparison to recent DNA-centric population-based microbiome studies, we characterised the stool samples in unprecedented detail. The collected stool samples were subjected to biomolecular extractions and high-throughput omics (metagenomics, metatranscriptomics and metaproteomics). In addition, we also carried out whole human genome sequencing of study participants, an effort which was led by Patrick May, an expert in family genomics based at LCSB. Given the relatively small sample size but the very detailed analytics, the study was carried out under the premise "small is beautiful". A major focus of the work lead by post-doctoral researcher Anna Heintz-Buschart (Figure 1) involved the development of a pipeline for analysing the multi-omic data at each level and for subsequently integrating the data (Figure 2). 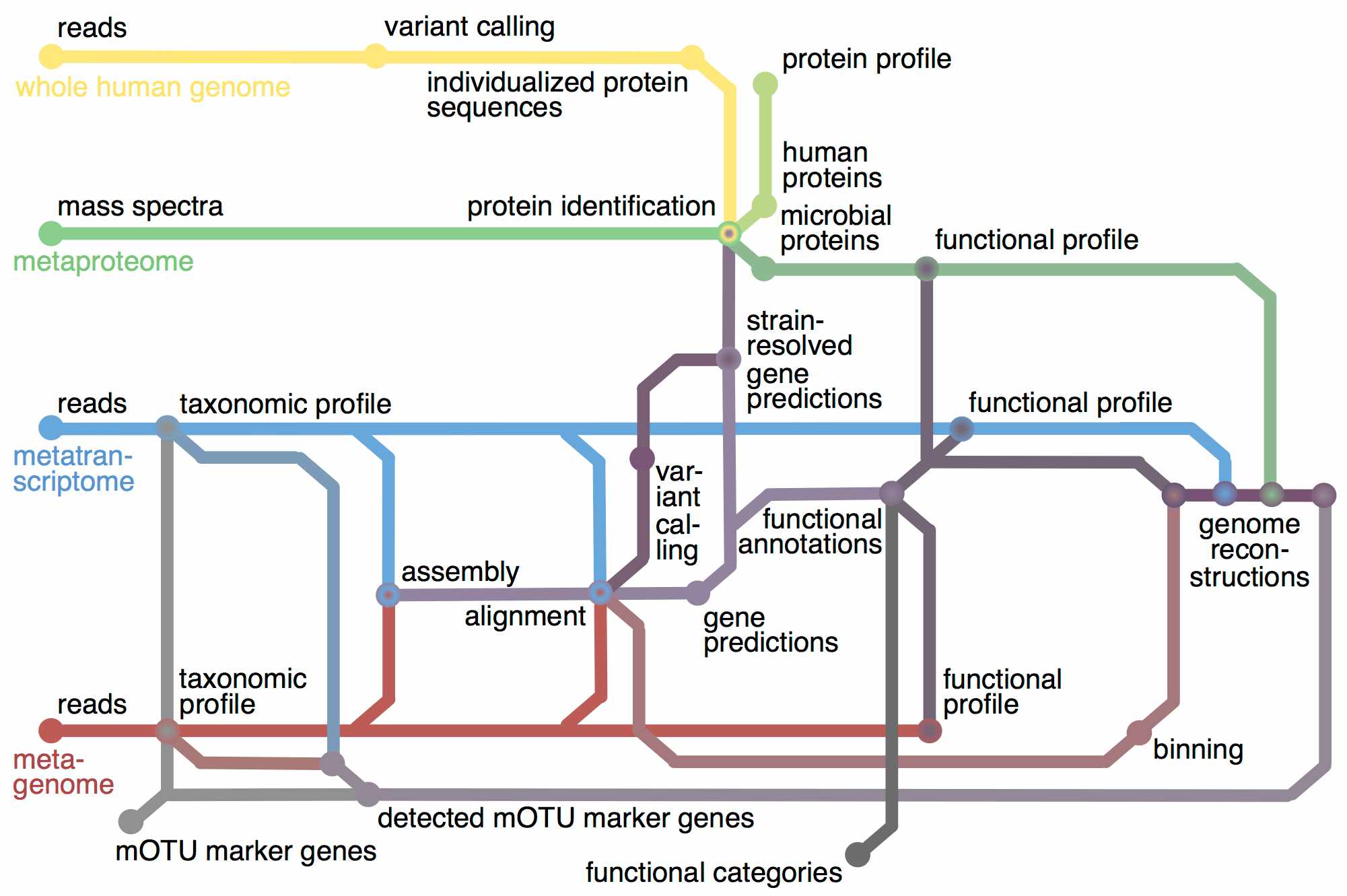 Our now published study (Heintz-Buschart et al., 2016) teaches a few important lessons with respect to the functional potential expressed by the gut microbiome in the context of type 1 diabetes. It also highlights the importance of integrating multiple "omes" from microbiomes. Essential insights from the integrated multi-omic data analysis include that family membership has a pronounced effect on the structural and functional composition of the gastrointestinal microbiome. Furthermore, consistent taxonomic differences were absent between individuals with and without type 1 diabetes across families, but interestingly certain human exocrine pancreatic proteins were found at lower levels in the context of T1DM. The associated microbial functional signatures were linked to metabolic traits in distinct taxa, meaning that for example reduced levels of human exocrine pancreatic alpha-amylases are linked to lower levels of expression for genes involved in thiamine biosynthesis, and that those genes can be encoded and expressed by distinct taxa in different individuals. We believe that this finding is particularly important and may have rather large implications for human microbiome research in general as a microbiome-conferred functions appear key in the context of a disease (T1DM) rather than differences in taxonomic composition. This finding may also explain the inconsistencies between previous studies looking at the microbiome in the context of T1DM.

The methodologies and results provide a foundation for future large-scale integrated multi-omic analyses of the gastrointestinal microbiome in the context of host-microbe interactions in health and disease. We aim to broaden our analytical platform to a larger number of study participants and other diseases in the future. The data also raises a number of interesting hypotheses about human-microbe interactions in the disease context which we aim to test using representative experimental models (Shah et al., 2016). Overall, our paper demonstrates the versatility of microbial communities in their native environment, e.g. the gut, and we are hooked to find out more about the functional capacities of the unseen world inside us according to the premise "small is beautiful".