The host is equipped with numerous early-detection immune mechanisms to alert for bacterial infection. Enteropathogenic E. coli (EPEC) is a gut pathogen that is well known for its ability to shut down many of these processes. Here we describe yet another immune evasion strategy by EPEC, whereby the host cell death mechanism, necroptosis is disabled by the cysteine protease activity of the type III virulence effector, EspL.

Enteropathogenic E. coli (EPEC) causes severe diarrhoea in young children and is one of the major causes of malnutrition and child mortality in the developing world. EPEC uses a surface syringe-like structure to deliver an arsenal of virulence proteins called type III effectors into host cells which interfere with multiple immune signaling processes to promote survival and growth of the bacteria in the gut. This ‘Deathly Hallows’ allows EPEC to use the effectors to keep the host cell alive thereby cheating enterocyte death mechanisms. In 2013, we (Pearson, et al, 2013) and Li, et al (2013) described a novel mechanism by which the EPEC virulence effector, NleB, shuts down two major modes of death receptor-induced apoptotic cell death (triggered by TNF and FAS) to prolong infection. However, during this process we hit a snag. We could show that NleB inhibited assembly of the FAS receptor signaling complex, but we could not show this for the TNF receptor complex for the pure fact that EPEC infection led to complete disappearance of a key component of the TNFR1 complex, RIP kinase 1 (RIPK1). Following some great ‘bucket science’ we discovered that another type III effector protein called EspL (previously uncharacterised) was responsible for cleaving RIPK1 during infection. Protein motif prediction programs were not returning any results suggesting EspL had any protease motifs, only that it was made up largely of ankyrin repeats, and so we were at a bit of a loss.

Then came the break-through; whilst on an overseas visit, Prof. Liz Hartland had an unrelated conversation with a collaborator Dr Gunnar Schroeder at Imperial College, London and he happened to mention ankyrin repeat cysteine proteases. On the long flight from London to Melbourne Prof. Hartland studied the primary EspL amino acid sequence and believed she saw a possible cysteine protease motif. Once connected to the internet, a full BLAST search and alignment of EspL homologues from different bacteria confirmed that the putative catalytic triad was conserved. We then quickly showed that mutation of these key amino acids resulted in a loss of RIPK1 degradation by EspL.

Over 5 years and with a brilliant interdisciplinary team we gradually deciphered the significance of RIPK1 degradation in EPEC infection. We discovered that EspL directly cleaves multiple host proteins for cleavage, all of which contain a shared RIP homotypic interaction motif (RHIM) domain. RHIM domain proteins are key mediators of host inflammatory and cell death pathways, in particular RIPK3 which is indispensable for the caspase-independent inflammatory programmed cell death mechanism, necroptosis. We showed that cleavage of RHIM proteins by EspL allows EPEC to inhibit necroptosis induced via multiple pathways including TNFR1, TLR3 and TLR4, promoting the survival of infected host cells and thereby prolonging infection (Pearson & Giogha, et al, 2017). 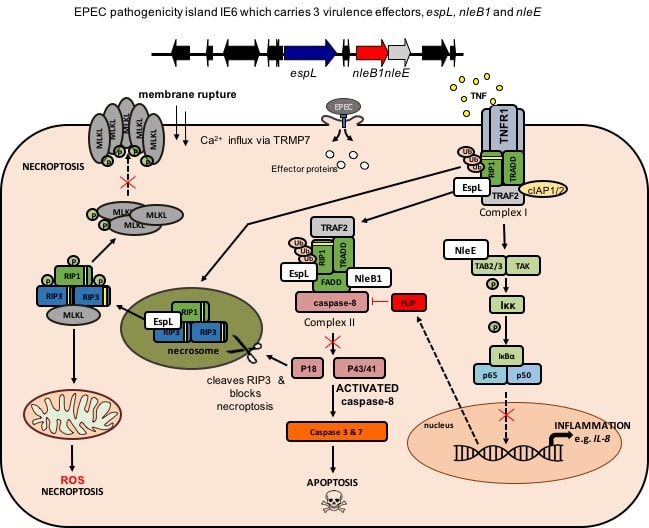 Figure 1. EPEC harbours a particular pathogenicity island that carries the genes encoding 3 type III effectors, EspL, NleB1 and NleE. Each of these effectors displays novel enzymatic activity and shuts down critical host innate immune responses including NF-κB signaling (inflammation/survival), apoptosis and necroptosis during infection. This schematic is a representation of the host proteins targeted by EspL, NleB and NleE within the TNF signaling cascade. 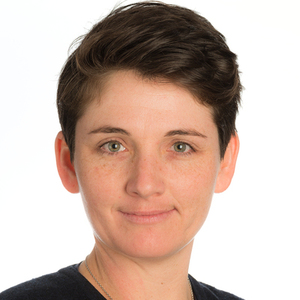 Dr Jaclyn Pearson is an NHMRC Peter Doherty Early Career Fellow based at the Peter Doherty Institute within The University of Melbourne, Australia. Her research focus over the last 7 years been on the biochemical mechanisms of type III bacterial virulence effectors.
Follow