​Bacteria and archaea have developed a variety of defence systems against bacteriophages, invading nucleic acids and mobile genetic elements. A number of these systems utilise nucleases that are activated through binding of guide RNA or DNA, and use them to degrade nucleic acids in a sequence-specific fashion. One example is the now famous CRISPR-Cas system. Another family of such nucleic acid-guided endonucleases are Argonaute (Ago) proteins, which are found in all three domains of life. While in eukaryotes they are known as key players in posttranscriptional gene silencing, recent studies on bacterial and archaeal Agos point to their role as defence systems. The majority of the to date characterized prokaryotic Ago proteins appear to rely on 5′-phosphorylated DNA guides, which are typically 19-25 nt in length. Archaeal Agos from the hyperthermophilic organisms Methanocaldococcus jannaschii (MjAgo) and Pyrococcus furiosus are guided by 5’-phosphorylated DNA strands and exclusively process cognate DNA targets.

In our current manuscript (Willkomm et al. 2017) we provide biochemical data and X-ray crystal structures of the Ago protein from M. jannaschii. Our biochemical characterisation shows that MjAgo possesses different cleavage activities and specificities, depending on the nature of the nucleobase (adenine, guanine, thymine or cytidine) on the 3'- and/or 5'-end of the guide DNA. In order to gain insight into the molecular mechanism of MjAgo we went on to determine the X-ray crystal structure of MjAgo with and without DNA. The initially obtained apo MjAgo crystals could be improved in size by micro seeding and diffracted X-rays to about 2.9 Å. The diffraction could be further improved to about 2.4 Å by dehydrating the crystals by soaking them in artificial mother liquor with increased PEG concentration overnight. However, structure determination proved to be difficult since molecular replacement using available structures of homologous Ago-protein did not work due to their low sequence identity. In addition the generation of selenomethionine labeled protein failed. Thus we used experimental phasing by isomorphous replacement with anomalous scattering and therefore tested various heavy atoms on about 80-100 crystals. Finally, two crystals that were incubated with mercury acetate still diffracted to about 3.2 Å and possessed enough anomalous signal to locate mercury atoms. We tried more or less all available software packages for data processing and experimental phasing. Finally by using CRANK2, in combination with ShelxD, REFMAC and BUCCANEER, we got the foot in the door, albeit the resulting electron density maps were not great. Combining the experimental phases of the mercury with molecular replacement of the PIWI domain (the domain most conserved in Ago proteins) did unfortunately not improve the electron density maps. Furthermore, only one molecule per asymmetric unit was present and hence non-crystallographic symmetry averaging could not be applied either. Thus we were stuck with relatively poor maps and building the structure was hard going. Due to non-isomorphism between the native and mercury derivatised crystals, the higher-resolution native data sets could not be used before a largely complete protein model was built in the experimental maps and refined against the data set collected on the mercury derivatised crystal.

Evident from the crystal structure, MjAgo shares the overall bilobial architecture, common to Ago proteins (Fig. 1), albeit differences in the relative position of the Ago domains are visible. We also set out to obtain crystals of the binary (with guide DNA) and ternary (with guide and target DNA) complex of MjAgo. Initially the conditions for complex formation, such as incubation temperature, concentration as well as buffer composition had to be optimised and we finally succeeded to obtain small crystals of MjAgo in complex with a 21mer phosphorylated guide DNA, which diffracted X-rays on a microfocus beamline to 3.2 Å. We could solve the structure using the coordinates of our finished apo MjAgo structures. Nevertheless, due to large conformational changes upon guide DNA binding and intrinsic flexibility of the protein and large parts of the guide DNA, model building was not straight forward. Comparison of the apo MjAgo and binary complex structure revealed that the PAZ-domain rotates by 74º upon DNA loading (Fig. 1). Note: a general mechanism of Ago-protein action is that binding of the guide nucleic acid results in solvent-exposure of the Watson-Crick faces of the nucleobases of the so-called seed region. This pre-organisation of the guide strand reduces the entropic cost, thus generating a high-affinity recognition binding side for the target. This is of particular importance for M. jannaschii, with an optimal growth temperature of 80-85 ºC. In addition, upon guide DNA binding we observe a structural transformation of a hinge region containing a switch helix, which for human Ago2 is critical for the dynamic target search process (Chandradoss, S. D. et al., 2015, Cell 162, 96–107) Previously, it was shown that base pairing with a target causes the release of the 3’-end from the PAZ domain, which is accompanied by further conformational changes, resulting in the cleavage competent complex and slicing of the target (Fig. 1). Albeit further work on different binary and ternary complexes is needed to fully decipher MjAgo function, our data provide penetrating insights into the molecular mechanisms that drive DNA-guided DNA silencing by an archaeal Ago. 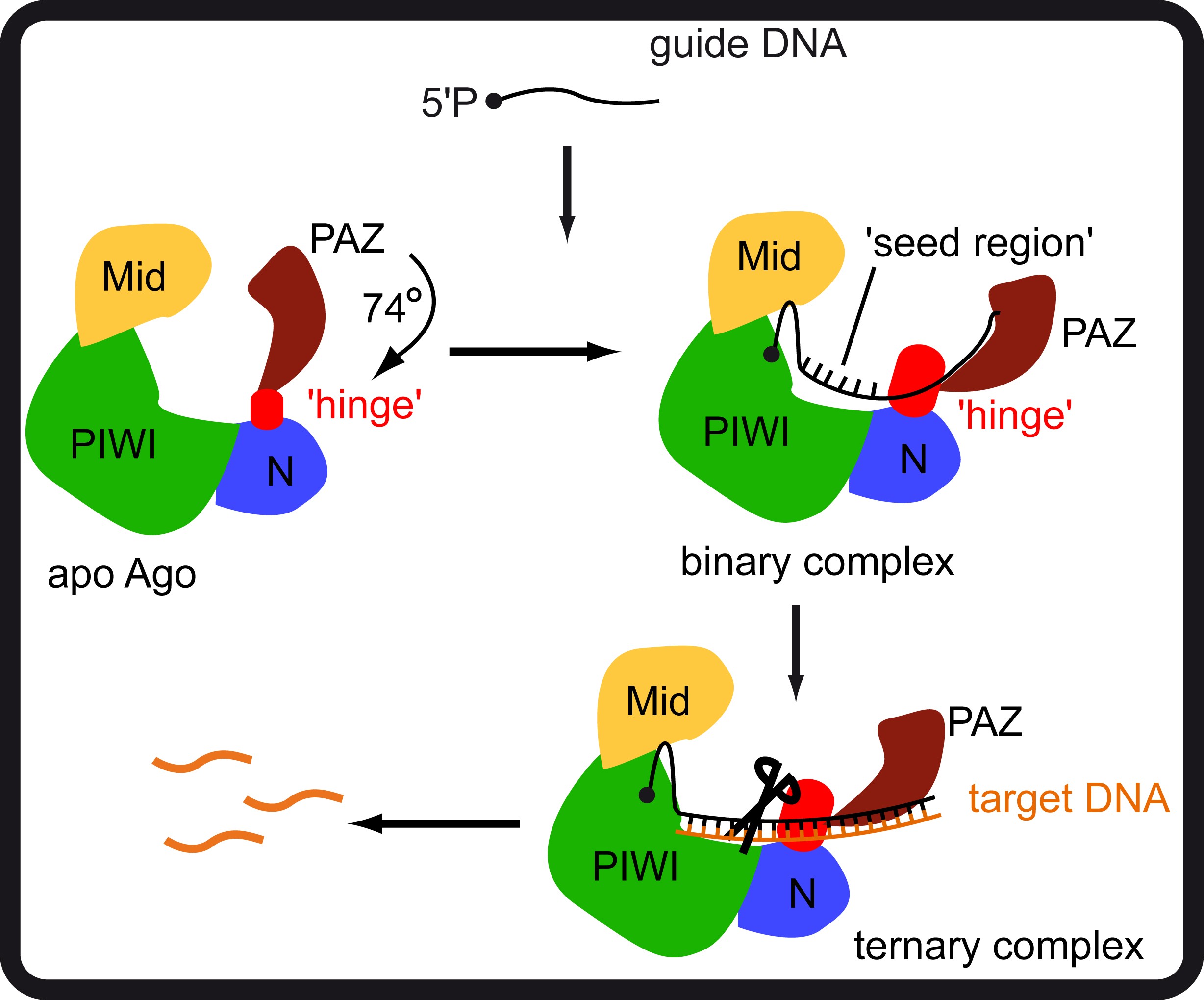 The paper in Nature Microbiology is available here: http://go.nature.com/2nvupKe 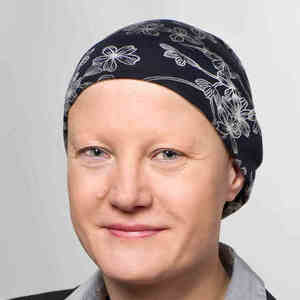