CD81 and SAMHD1 in the dNTP battle against HIV-1

A cellular mechanism to control an HIV-1 restriction factor.

Some years ago, we decided to explore the intracellular interactome of tetraspanins by a high-throughput proteomic screen that was finally published in 2013 in J Biol Chem. Among the interactions with CD81, one was repeatedly and very specifically found in all experiments: SAMHD1. At that time, nothing was known about this molecule, except that it contained a SAM and a HD domain in its structure. Few reagents were available, not a clue about the molecule, this piece of data remained soaked into a long table of interactions. A few years later, a review article in Nature Medicine caught my eye: it described the advances in SAMHD1 characterization as a dNTP hydrolase and interestingly enough described it as a restriction factor for HIV-1 infection. A quick search on SAMHD1 rendered around 20 articles, all of them published in high impact journals! It was therefore the time to begin the characterization of this interaction.

For that purpose, I needed an expert in virology, so I reached Dr Vera Rocha-Perugini from Dr Sánchez-Madrid’s group, with whom we have been collaborating along the last years. Of course, for the experiments using HIV special biosecurity conditions are needed. For that we relied in our fruitful collaboration with Dr Susana Álvarez in Dr Muñoz-Fernández’s group at the Hospital Gregorio Marañón. As always in science a collective effort.

A first proof of concept experiment, in which we silenced CD81, rendered promising results and we decided to go for it. Vera Rocha-Perugini together with Henar Suárez from my group, with the assistance of my lab technician Soraya López-Martín, have been working over the last 3 years in characterizing the molecular association between CD81 (a membrane protein) and SAMHD1 (which is primarily in the nucleus, but could also be detected in the cytoplasm). Because of our previous expertise in tetraspanins, we had a lot of reagents to either silence or overexpress CD81. In collaboration with the group of Shoshana Levy in Stanford, we also employed the CRISPR/Cas9 system to knock out CD81 gene in cells, which had been set up by Felipe Vences-Catalan. We could demonstrate that overexpression of CD81 increased viral RT and reduction of CD81 diminished viral replication. Meanwhile we sent letter-coded samples of our cells to the Emory University School, where Gina Lenzi in Dr Kim´s group demonstrated a direct effect on dNTP intracellular content.

All experiments were running smoothly until we got to the revision phase in Nature Microbiology. At that time, a series of witched effects seemed to fly over our heads: freezers unfreezing, culture incubators running out of CO2 over the weekend and other catastrophes that managed to make us frantic. Happy enough, we could just in time overcome all these problems and experiments performed with reporter virus confirmed the initial observations.

Mechanistically, all the initial characterization of cell lines expressing SAMHD1 helped us to provide a mode of action, since we observed that subcellular localization and overall expression levels of SAMHD1 were affected by messing up with CD81. Thinking on a therapeutic approach, we employed blocking peptides against CD81, which were also functional in inhibiting viral RT. Our results provide evidence on how the cellular protein CD81 controls the expression of SAMHD1, a restriction factor of HIV-1 replication. Through this mechanism, CD81 regulates the cellular levels of dNTPs, which could also be relevant for the replication of other viruses. We are proud of contributing with a new therapeutic target for HIV infection!

Special thanks to Miguel Vicente-Manzanares for Figure masterpiece. 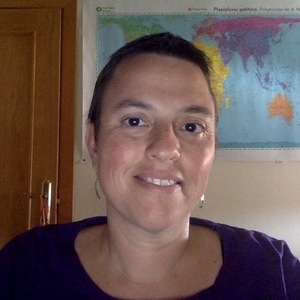 Dr. Yáñez-Mó research has been focused, since her Ph.D. in the functional characterization of tetraspanin-enriched microdomains in different biological processes: cells migration, tumor and leukocyte extravasation, viral infection, fibrosis, embryonic implantation... In 2009 she was appointed as Director of Technical Facilities and Young Group Leader at the Hospital Santa Cristina, to where she moved in May 2010. In 2014 she applied to the competitive contract Ramón y Cajal, which offered her a link with the Universidad Autónoma de Madrid and moved to the Center of Molecular Biology Severo Ochoa in the campus in 2016. Recently, because of her data relating tetraspanins in exosome biogenesis, she became member of the International Society of Extracellular Vesicles (ISEV) and IOC member of its international meetings in 2016 and 2018. She is also founder member of the Spanish Group of Research in Extracellular Vesicles (GEIVEX) and Member of the Management Committee in BM1202 European Network on Microvesicles and Exosomes in Health and Disease COST ACTION. In this context, her group is devoted to the functional characterization of tetraspanins in exosome biogenesis and function, and in the utilization of tetraspanin-based reagents for exosome quantification and detection in biological samples.
Follow