Bacterial fibres with a calcium scaffold

The paper in Nature Microbiology is here: http://go.nature.com/2i0JPW5

Calcium ions provide strength to vertebrate bones and act as important eukaryotic signalling molecules. It is, therefore, no surprise that calcium is involved in the regulation and function of several virulence factors in bacterial pathogens. One of the best-known examples of bacterial regulation by calcium is found in the bacterial injectisome (type 3 secretion system). These nanomachines sense local calcium levels, telling bacteria when to inject proteins that hijack the host signalling network and promote bacterial survival and proliferation.

In 2009 a study in the labs of Wim Hol and Maria Sandkvist demonstrated a link between calcium and another bacterial machine, the type 2 secretion system (T2SS) (1). The T2SS engine builds a fibre-like structure (called a pseudopilus) from membrane-embedded pseudopilin subunits to secrete a specific set of proteins to the milieu, typically toxins or hydrolases. Korotkov's and Sandkvist's work showed that a single calcium ion is present in the crystal structure of the pseudopilus fibre subunit and that the calcium-coordinating residues are involved in protein secretion in Vibrio cholerae.

Based on this study, we hypothesized that calcium might be involved in pseudopilus dynamics, which might give us a clue on how these fibres drive protein secretion. As NMR is the technique best suited to study structural dynamics of proteins, we asked the specialists, Aracelys Lopez-Castilla and Nadia Izadi-Pruneyre to analyse the major pseudopilus subunit PulG from our favourite model, the Klebsiella T2SS. Olivera (my supervisor) insisted that we should isolate PulG from the periplasm, since previous reports suggested that calcium is more concentrated in this bacterial compartment (2). Although the role of calcium in the Klebsiella T2SS had never been investigated and despite the fact that isolating periplasmic proteins is a bit more labour-intensive, we performed these initial experiments with blind faith. Still, I designed a pilot experiment to look at the role of calcium in bacteria. Indeed, after adding 2 mM EGTA to our media to deplete calcium, we could no longer detect PulG in cell extracts. Aracelys found that EGTA treatment affected the NMR spectra indicating that calcium is present in periplasmic PulG.

So Olivera was right, but we were facing a huge roadblock - working with a protein that is degraded as soon as calcium binding was altered in any way. This study would not have gone much beyond a sad look at proteolysis if it weren’t for the beautiful data from Aracelys that allowed us to look at the conformational changes of PulG in the absence of calcium. We worked hand in hand to relate these data with the in vivo effects and the calcium-dependent changes were mapped onto the PulG three-dimensional structure, calculated by Benjamin Bardiaux and Aracelys using a method developed by Michael Nilges.

The structure provided critical information that directed mutagenesis aimed to stabilize the calcium-binding loop. I wanted to generate a stable PulG variant that would tolerate mutations of the calcium-binding site, to study their effects on protein secretion and protein-protein interactions. I produced the PulGCC variant with an intra-molecular disulphide bridge, which was stable and assembled pseudopili. To our major disappointment, this "stabilized" protein was in fact even more calcium-dependent than the native PulG so all dreams of mutagenizing the calcium-binding loop were dashed. From the disappointment came an interesting observation, pseudopili assembled using the "stabilized" PulGCC subunit were also more dependent on calcium for stability. This protein seems stiffer and loses its calcium more readily causing its polymers to break and fall apart.

Then came inspiration, and these brittle polymers were sent across the Atlantic for cryo-electron microscopy analysis, a technique whose resolution had been limited by the high flexibility of native pseudopili. We figured that the more brittle fibres would simply break instead of twisting into hundreds of intermediate conformations and might allow us to approach atomic resolution. By a stroke of luck, this disappointing variant did just what we expected and allowed Weili Zheng in Ed Egelman's group at the University of Virginia to acquire images with improved resolution. With this first clear view we saw the finer details of our fibres and new surprising features, including an extended region of the N-terminal PulG helix. The precise map of this region, generated by Benjamin, suggested that previously unsuspected conformational changes occur during pseudopilus assembly. The other surprise was that the calcium-binding loop was located on the fibre surface and was not involved in stabilizing inter-subunit interactions, as we had hypothesized. This suggests that pseudopilus disassembly results from a conformational change in PulG monomers that indirectly disrupts inter-subunit contacts. Although this study has led us to ask many new questions, I guess we can now say that calcium doesn't just build strong bones; it is also essential to build strong backbones of pseudopilus subunits and their filamentous polymers. 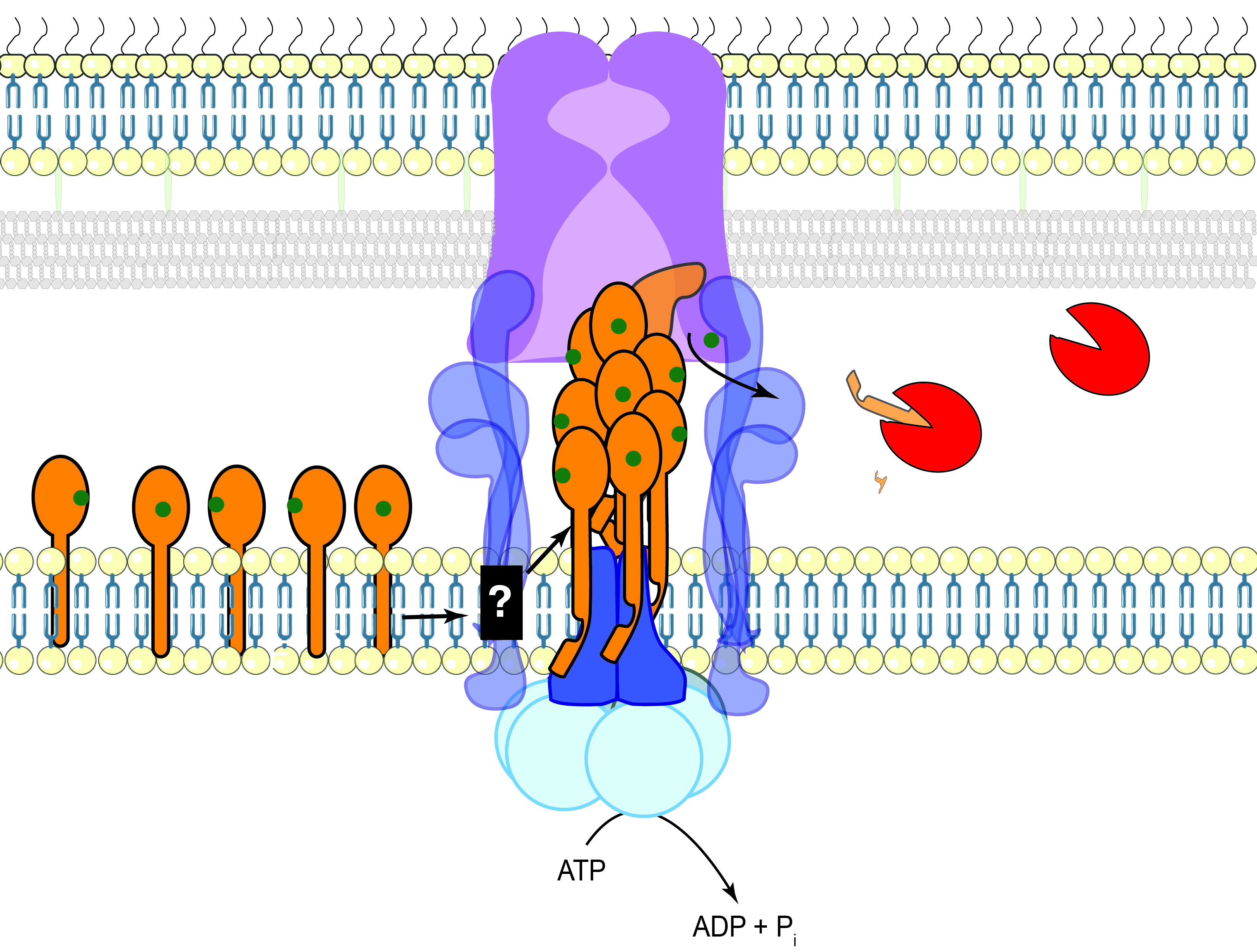 Schematic model of pseudopilus assembly and disassembly. Calcium-bound PulG (in orange) is located in the bacterial inner membrane prior to entry into the type 2 secretion (T2S) nanomachine. After an interaction with an assembly component (in dark blue), the PulG monomer enters the cage and is extracted from the membrane, potentially resulting in the partial stretching/unwinding of the N-terminal alpha-helix. These stretched subunits are packed into the growing pseudopilus. Over time, individual PulG subunits undergo a conformational change, either due to biophysical forces or an interaction with a protein partner, and lose the calcium ion, which results in degradation by resident proteases (in red). This continuous cycle of pseudopilus assembly and disassembly could allow for continuous protein secretion.

In his novel "Pyramids", Terry Pratchett calls Human beings "little bags of thinking water held up briefly by fragile accumulations of calcium". Incidentally, during the course of our study, the three co-first authors became parents to new human beings, made of calcium and other starstuff (to quote Carl Sagan). Indeed, to end by quoting Ed Egelman's instant remark, these two years were productive and reproductive.