On the way to go viral

The paper in Nature Communications is here: http://go.nature.com/2ErPbAz

“Lyon is a very dynamic scientific and technological hub and also a very charming city!”

That is what I told myself during the two-hour train ride that separated the Le Hir’s lab in Paris, were I was doing my postdoc, and Jalinot’s lab in Lyon. I had hardly begun working on human UPF1, a RNP remodeling enzyme that is essential for Nonsense-Mediated mRNA decay (NMD). At that time, we were trying to figure out how to demonstrate the possible relevance of UPF1 translocation on nucleic acids (NA) for NMD. We used a single-molecule technique for this molecular motor because it allowed us to make a movie of one single enzyme in action. Jalinot’s lab was studying HTLV-1, a human retrovirus that seemed to hijack host NMD in order to save its dangerous genomic RNA from degradation. They found that viral Tax factor interacts with UPF1 to inhibit NMD and they were looking for biochemical and enzymatic assays to characterize their interplay.

Deal is done! The two labs started an intense collaboration…leading to many train travels for me and my protein coding plasmids!

In this work we have not only combined several techniques, together with our different skills, but also combined our distinct way of thinking and feeling science. Even in doing so, the result is not always successful! We found ways to solve many technical problems without altering the science behind them and sometimes launched ourselves into new never-used techniques for “last-minute” experiments using a highly toxic protein such as Tax is… so we have had moments when no one was happy to work with Tax, not even BL21 bacteria!

We mixed up what we felt was the most physiological ex vivo approach, in vitro bulk and single-molecule assays. We described how Tax, interacting with the core motor of UPF1, inhibits its enzymatic activity and decreases its affinity for nucleic acid substrates. Observing the localization of the Tax interaction site on UPF1 and their interaction kinetics, we hypothesized that Tax could plug the RNA binding channel before RNA enters the site. This explained the Tax-induced enzymatic and RNA affinity defects, but some UPF1/Tax complex still bound the substrate in vitro and ex vivo. We told ourselves that Tax must interact with an already running UPF1.Therefore we reproduced the scenario in single-molecule experiment: during UPF1 unwinding and translocation, we added Tax and we observed the effect. When I analyzed the recorded tracks, I felt so excited! We observed that Tax was able to arrest UPF1 translocation for a bit of time before inducing UPF1 fall from NA. Therefore, considering the effect of Tax on NMD, this result meant that UPF1 translocation is a key mechanical feature for NMD progress. In Italy, we say: “killed two pigeons (birds) with one broad bean (stone)”!

In conclusion, I stopped traveling from Paris to Lyon. I definitively moved with my whole family and the plasmids, to start a new adventure on the trail of novel stories to tell about retroviruses. 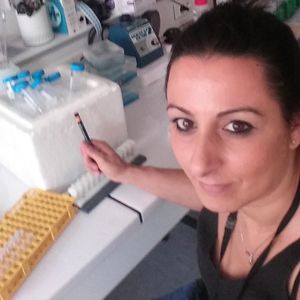