The paper in Nature Microbiology is here: https://rdcu.be/K2hN

A long time ago in a seminar room far, far away. It’s where InfectX, a large multi-lab research project with the goal to comprehensively identify the components of the human infectome, was created. Here, a chance encounter between Bernd Wollscheid and myself initiated what is now a long-standing and productive collaboration.

In our first collaborative project we developed an innovative chemoproteomic approach to discover cell-surface receptors for known ligands. Using TRICEPS-based Ligand Receptor Capture (TRICEPS-LRC) technology to label intact mature vaccinia viruses, we identified the cell surface proteins AXL, M6PR, DAG1, CSPG4 and CDH13 as binding factors on human cells. In the context of discussions about this first project we became interested looking at the impact of vaccinia virus (VACV) infection on cell signaling. However, the complexity of cell signaling networks with built in redundancy, feedback loops and multi-enzyme/substrate relationships makes them difficult to dissect using the currently available toolboxes To truly unravel a signaling network, we needed a closed system containing a defined subset of players, and no redundancy.

To cleave or not to cleave

Amongst these was the viral protease I7, the protein responsible for turning immature virions into mature virions through protein cleavage. Enter Samuel Kilcher from my lab. Four phospho-mutants, 3 cleavage assays, 2 transient complementations, and 1 Rif-release later and we know that F10 regulates I7 activity during virion maturation. Meanwhile Karel has mapped the peptide abundance of I7 substrates in wild-type and H1(-) virions, and given birth to the "Novy plot" (Figure 1), which shows that I7 substrates are hypercleaved in the absence of H1. Put simply, F10 phosphorylation turns on I7 protease activity and H1 de-phosphorylation shuts I7 down. 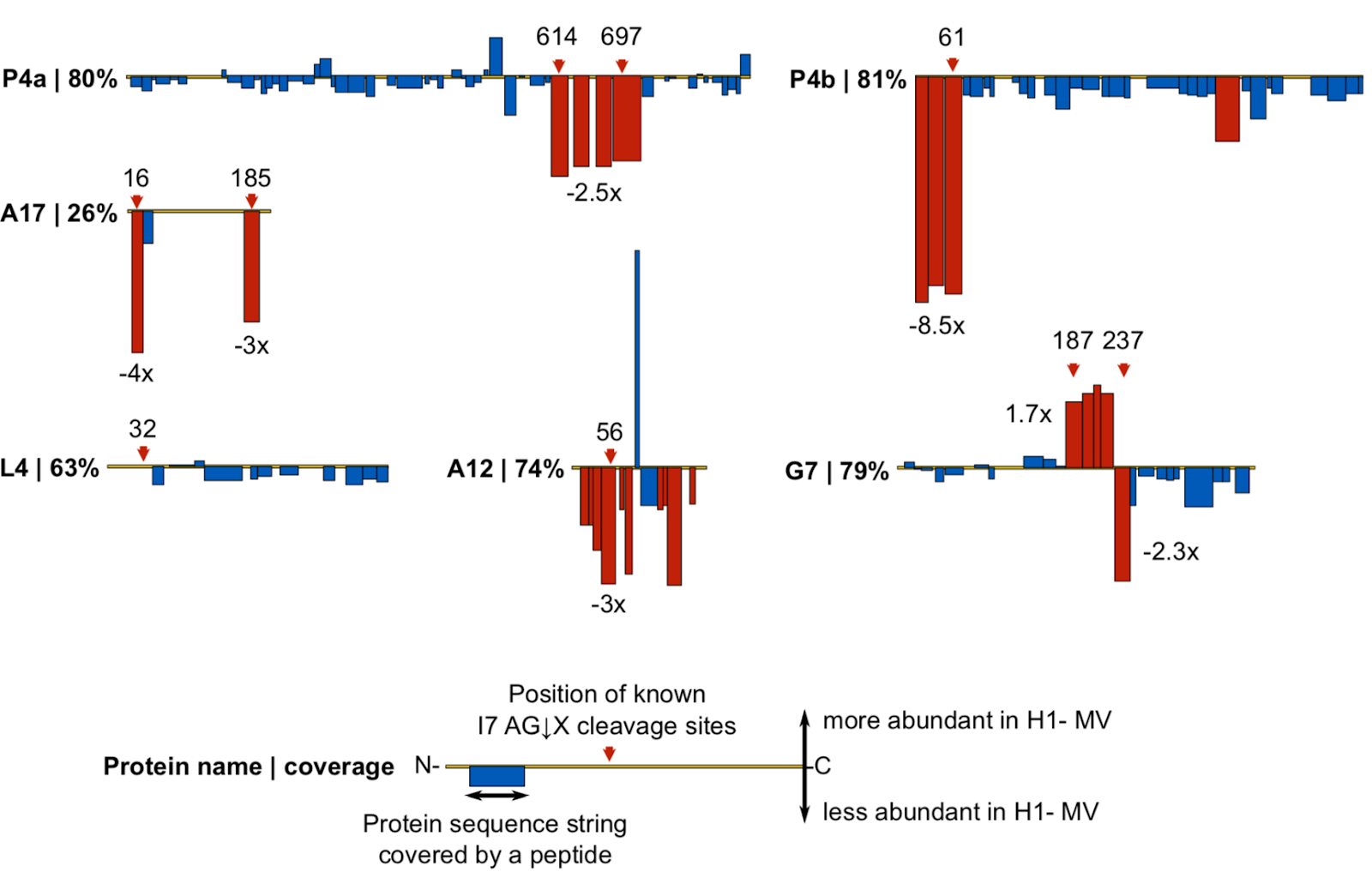 Figure 1: H1 regulates virion-associated I7 proteolytic activity. "Novy Plot" from Novy et al.. The relative change in abundance of tryptic peptides measured for structural proteins between H1(-) and WT MVs are displayed on the proteins’ linear sequence from N- to the C- terminus.

Something was missing. We identified 179 phosphosites in 47 viral proteins, yet none of them accounted for the transcriptional defect in H1(-) virions? Intriguingly, although H1 is a dual-specificity enzyme we didn’t identified a single tyrosine phosphosite. “Below detection and FYI, at least in eukaryotes protein phosphorylation commonly occurs on serine, threonine and tyrosine amino acids at an estimated ratio of 1000:100:1”, Karel said, “we need 5 milligrams of VACV for a quantitative phosphoproteomic profiling  experiment and change the strategy a bit”. I had to laugh, it’s the only time I’ve ever weighed a virus prep. We found that 3 components of the viral transcription machinery were hyper-phosphorylated on tyrosines residues in H1(-) virions. Six phospho-mutants, 3 transient complementations, 1 new fluorescent recombinant virus, and a slew of EMs later, Samuel has shown that loss of dynamic phosphorylation of A7, the viral early transcription factor, underlies the H1(-) transcription defect.

From Zürich to Melbourne & London and back

In sum, these results establish a key role for dynamic phosphorylation in the regulation of infectious poxvirus particle assembly and highlight the utility of combining quantitative proteomic screens with mutant viruses to uncover proteotype-phenotype-genotype relationships. The last year of manuscript preparation and the revision was performed while Bernd was in Zürich, Karel was in Melbourne, and Samuel and I were in London. Karel and Samuel have since returned to Zürich, making this manuscript both a cross-disciplinary and a cross-continental effort to uncover a complex viral signaling network that controls virus assembly and transcriptional competence (Figure 2). 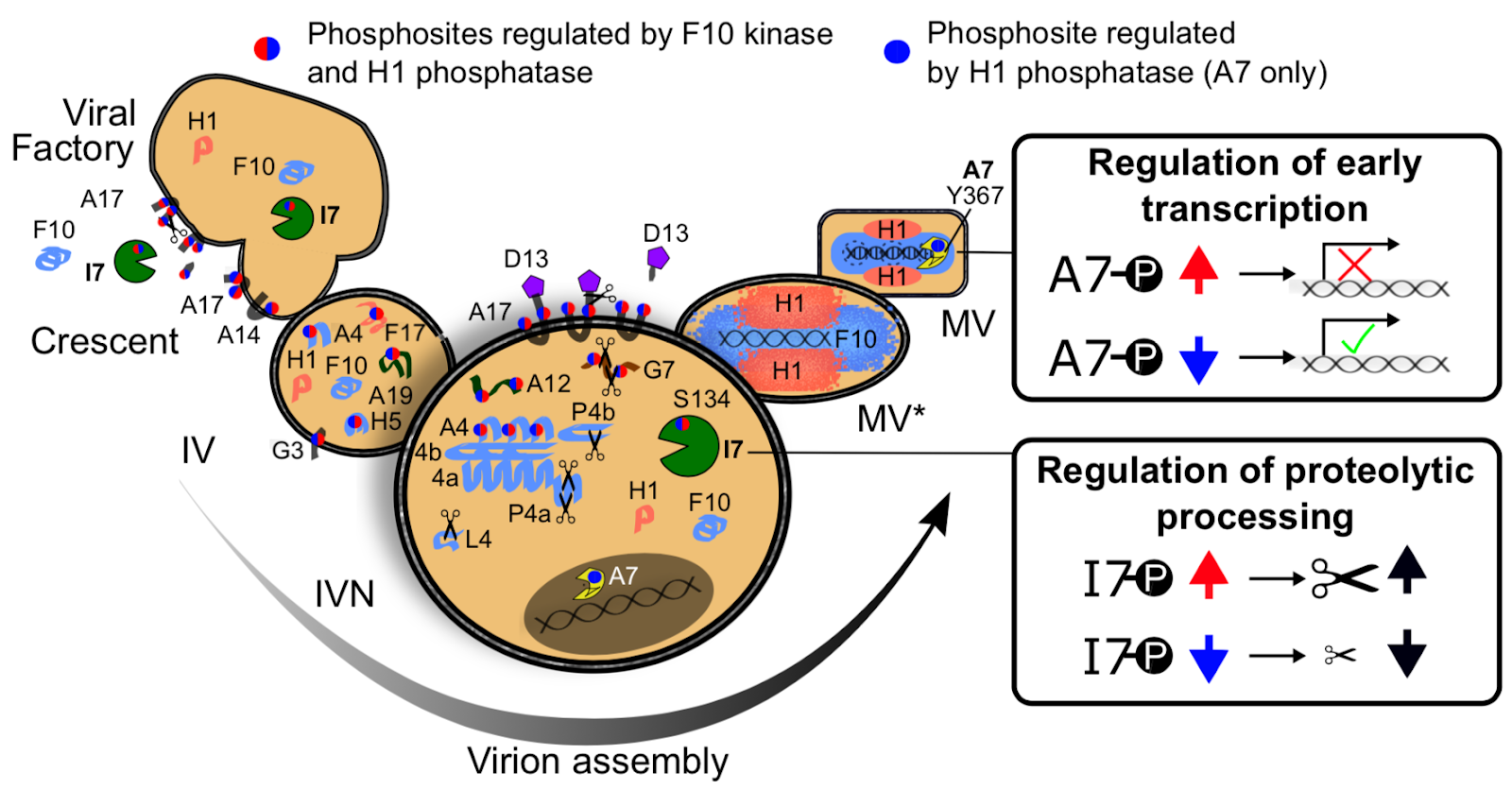 The paper in Nature Microbiology is here: https://rdcu.be/K2hN

Written by Jason Mercer and Bernd Wollscheid on behalf of the other authors.

Poster EM image credit to Ian White; MRC-LMCB UCL: The red objects are called viral crescents, which grow to form the violet circles called immature virions, when the viral genome is encapsidated into these they become known as immature virions with nucleoid (the genome is the very dense structure within), the green objects are fully assembled infectious vaccinia viruses, which are called mature virions.

The Wollscheid laboratory would like to understand how molecular nanoscale organization influences biological function in health and disease with a focus on the surfaceome & extracellular interactome.
Follow