A Spoonful of Sugar Helps the Parasite Go Down

Some disease-causing organisms regularly change their exposed surfaces to prevent recognition and clearance by the immune system. The African trypanosome that causes sleeping sickness has been known for decades to switch surface coat proteins for this purpose. Our recent work identifies a novel route to antigenic variation in this organism, namely the use of surface sugars to diversify the chemical groups the immune system must deal with.

Back in 2014, my Rockefeller University colleague Nina Papavasiliou asked me to model antibody interactions with certain variants of the primary coat protein of the African trypanosome, the cause of sleeping sickness. As an X-ray crystallographer working in bacterial pathogenesis, I had a lot to learn about eukaryotic parasites. My follow-up questions quickly revealed to me that everyone had a lot to learn. It was shocking how little was known about these interactions and the nature of diversity in this highly variant, immune-evading system.

“You mean there aren’t any antibody structures with the coat protein?” I asked, seeing the hopes of any meaningful modeling dashed.

“No,” she responded. “Nothing. And only two coat protein structures out of thousands of variants are known.”

I squinted. “But this seems like the primary interface between the host and this pathogen.”

“Wow,” I shook my head. “Well, somebody really ought to do this.”

After four years, a field switch from bacteria to trypanosomes, a trans-Atlantic move of my laboratory from New York to the German Cancer Research Center in Heidelberg, several crystal structures, four collaborating groups, and many surprises, this initial request matured into what we believe is a new paradigm for immune evasion in this organism, with potential implications for the use of glycans to impair host immunity in other pathogens. Our new paper presenting these results can be found here. [https://www.nature.com/articles/s41564-018-0187-6.pdf]

The mammalian immune system is a thing of great power and danger, as our continuing survival in the face of pathogenic onslaught and cancer attests, and as the successes and complications of cancer immunotherapy caution. It is a system evolved as a microcosm of evolution itself, a “meta-system” of evolutionary recursion based on subverting an ancient piece of parasitic DNA and weaponizing it to attack and destroy dangerous entities from microbes to tumor cells.

Its superpower is variation: the ability to produce a repertoire army of different antibodies that can recognize basically any pathogenic protein and signal the body to destroy the entity harboring it. It's the system we exploit to vaccinate ourselves and our pets. Without it, we’d all be dead in short order from a number of diseases. It's that effective.

So what’s an enterprising pathogen to do?

Counter with its own real-time variation, of course. With Antigenic Variation.

In the African trypanosome, the process of antigenic variation has been taken to an entirely Olympic level of performance.

The surface of the African trypanosome is coated in over ten million copies of the Variant Surface Glycoprotein, or VSG. Think of it as a dense, protein carpet, each upwardly projecting fiber a single VSG that is stitched to the membrane of the parasite by a chemical bond (glycosylphosphatidylinositol or GPI-anchor).

The immune system mounts a very effective response to this giant array of VSG molecules. Antibodies bind to the coat and summon the weaponry to kill the pathogen. The parasite population begins to drop precipitously. And then….

A small number of trypanosome cells change their coat protein. They access a large genomic repertoire of VSG genes that code for proteins that are antigenically distinct, in other words, that look different to the immune proteins now busily clearing the other coat. They replace the old coat with a new one, rendering the immune system naïve, “rebooting” the immune response, essentially.

This antigenic variation leads to prolonged cycles of parasitemia and the ill effects of it, fatal in many cases if not treated with many of the harsh, chemotherapy-like drugs used to combat this infection. This process has been studied for many decades.

The Substance of Variation

A central assumption in the field has been that this antigenic variation is due exclusively to the divergence in amino acid sequence of the VSGs, that the protein composition is the “substance of variation.” While a reasonable assumption from previous data, my foray into the structural biology in this system has shown that the picture is quite a bit bigger and more fascinating than that.

In the process of working to crystallize VSGs with antibodies (the original idea that brought my laboratory into this area), we also crystallized and solved the atomic-resolution structures of several new VSGs on their own. One of these, the variant VSG3, had a surprising set of stories to tell.

In addition to the structure of VSG3 being markedly different in many significant ways to the other three VSG structures that have been solved over the last 30 years (broadening the scope of variation by protein composition), the molecular images we obtained from X-ray crystallographic analysis revealed something completely new and unexpected: a sugar attached to the very top of the protein coat, facing outwards toward the immune system.

Our collaborators in the Ferguson lab at the Wellcome Centre for Anti-Infectives Research in Dundee then used a sophisticated “protein weighing” technique called mass spectrometry to show that this sugar on the coat is extremely heterogenous, composed of glycan chains of lengths ranging from 0-3.

This patchwork of differing chemical groups on the surface and the effects it could have on local protein structure and antibody binding led us to hypothesize that this could be a modification designed to impair host immunity.

Data produced by our collaborators in the Papavasiliou, Raper, and Figueiredo labs have shown that this is indeed the case. The presence of the sugar increases virulence, dramatically reduces the ability of immunization to protect the host, and directly impairs the binding of antibodies to the coat. In short, by placing variable length sugars on the coat, the pathogen produces a surface that is extremely damaging to the immune response.

We are also able to identify a peptide motif on which the sugar is placed that allowed us to predict several other VSG proteins that would have a similar modification (as well as predict other VSGs that would not). This indicates that the modification may be quite widespread.

Because O-linked sugars (like the one on VSG3) on surface proteins like mucin have been linked to immune modulation in other contexts such as cancer, there is a growing interest in understanding how carbohydrate modifications of proteins interact with immune cells and proteins. Finding such an example in a microbial pathogen provides a fresh perspective and one that offers many scientific advantages for study (easier to grow and examine cells, control environmental variables, etc).

In short, jumping nations and fields to study some unexamined areas in parasite infection biology, we discovered that the African trypanosome uses sugars to enhance its ability to evade the immune system by antigenic variation. This indicates that post-translational modifications (chemical elements beyond the protein composition itself) are a potent source of changing the coat and fooling the immune system, with possible implications for other pathogens that may be using this approach as well. 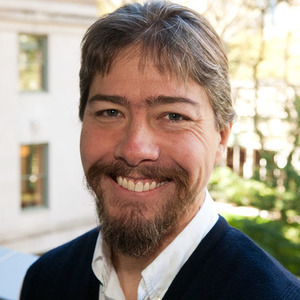 Erec Stebbins, Ph.D., is a biomedical scientist and novelist. Head of Rockefeller University's Laboratory of Structural Microbiology from 2001-2016 and currently Head of Division of Structural Biology of Infection and Immunity at the German Cancer Research Center, he is known for his contributions to the fields of cancer research and infectious disease, studying the structure of disease-related proteins through the technique of X-ray crystallography.
Follow