Methane is an important component of the global carbon cycle and a significant contributor to climate change due to its high global warming potential. One of the biggest sources of methane is gas seeps, where methane is emitted along with other gaseous alkanes, collectively known as natural gas. Luckily, there exist in nature, bacteria that feed on methane before it is released to the atmosphere. Methylocella are a unique group of bacteria which not only feed on methane but also on other major components of natural gas. In a recent study published in the journal Microbiome, we have reported the abundance, distribution and diversity of these bacteria which have been overlooked in the past.

The paper published in Microbiome is here: go.nature.com/2NM2XBD

Methane is a potent greenhouse gas in the atmosphere with global warming potential approximately 34 times greater than carbon dioxide. Around 500-600 million tonnes of methane are released each year from various natural and anthropogenic sources and atmospheric concentrations of methane have been steadily rising since the Industrial Revolution. Based on its sources, methane can be categorised into two types: a) biogenic methane, produced in anoxic environments such as wetlands and rice paddies by methanogenic organisms and b) thermogenic or geological methane, emitted in the form of natural gas produced from the thermogenic decomposition of buried fossil organic material.

Natural gas consists usually of thermogenic methane and substantial amounts of other climate-active gaseous alkane, such as ethane, propane and butane. From subsurface reservoirs, it reaches the surface of the Earth through natural seepage or mining and extraction activities. Globally, geological methane from natural gas seeps is the second largest natural source, after wetlands, and apart from methane, it also contributes up to 3–6 million tonnes of climate-active ethane and propane per year. Seepage of natural gas occurs in a wide range of environments such as shale gas seeps, marine seeps, terrestrial seeps and mud volcanoes.

Luckily, methane oxidising bacteria (known as methanotrophs) mop up much of the methane produced before it escapes to the atmosphere thus mitigating the effects of global warming by this gas. Aerobic methanotrophs utilize two different enzyme systems; a membrane bound methane monooxygenase (pMMO), and a soluble methane monooxygenase (sMMO). Until the late 1990s, methanotrophs were considered to be obligate i.e. only capable of growing on methane. The pioneering work of Svetlana Dedysh and colleagues during the early 2000s resulted in the discovery of facultative methanotrophs called Methylocella, capable of growing on multi-carbon substrates. These were unusual since unlike all other methanotrophs they contained only sMMO but no pMMO enzyme.

The work in this paper was motivated by our findings that Methylocella contains an additional enzyme propane monooxygenase, which allows Methylocella to grow on ethane and propane, significant components of natural gas. This ability enables Methylocella to utilise the major components of natural gas, methane, ethane and propane. Therefore, we hypothesised that Methylocella would be abundant at natural gas seep sites because they would feed on methane and other gaseous hydrocarbons in these environments compared to other conventional methanotrophs who cannot feed on anything else other than methane. To examine the distribution, diversity and abundance of Methylocella, we needed to develop DNA-based assays to detect specifically Methylocella species in different environments. These assays were based on 16S rRNA gene and a functional gene, mmoX, encoding the active site polypeptide of sMMO in Methylocella. Environmental samples were collected from several natural gas seep sites in Romania and New York State (USA).

This study has revealed that facultative methanotrophs are abundant particularly at natural gas seeps and may play a significant role in biogeochemical cycling of gaseous hydrocarbons. Information of “what is there” in the environment now motivates us to isolate new strains of facultative methanotrophs from natural gas seep sites and study their metabolism in more details to understand their role in the cycling of these atmospheric trace gases. This study is very timely, since unintentional releases of natural gas are widespread and likely to increase, especially with the exploitation of unconventional resources including shale gas extraction, with associated concerns of environmental pollution and climate change. 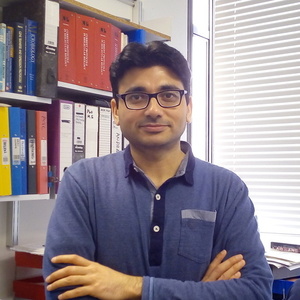 Assistant Professor, University of the Punjab