To many scientists, it may seem that HIV prevention research has succeeded – large clinical trials of oral pre-exposure prophylaxis (PrEP) and vaginal formulations of antiretroviral drugs (ARVs) demonstrated that these products can indeed prevent HIV infection when used [1-3]. This is great news! But the problem we face as a global HIV prevention community is not whether or not we have efficacious products. The problem is whether or not the products will appropriately meet women’s needs and lifestyles and thus whether or not women will use them. Adherence to product use is quite possibly the biggest issue blocking the eradication of sexual HIV transmission [4].

The paper in Nature Communications is here: go.nature.com/2xB816j

The Population Council has been tackling HIV prevention with a holistic bench to bedside approach that incorporates the importance of adherence and its driving factors, including acceptability, for many years [5]. Comprised of formulation chemists, basic biologists, pre-clinical and clinical researchers, and behavioral scientists, the Council understands that if women don’t like a product or its components or the product doesn’t fit into their way of life, they can’t be expected to use it. In the same vein that there are now many options for contraception used by women in different geographical regions and different phases of life, there also need to be many options for HIV prevention. These should range from long-acting to on-demand, and from ARV-based, to over-the-counter.

Moreover, the role that other sexually transmitted infections (STIs) play in HIV infection needs to be considered. Many STIs, including herpes simplex virus (HSV) and human papillomavirus (HPV) increase HIV susceptibility and exhibit intertwined epidemiology with HIV [6-11]. A multipurpose prevention technology (MPT) product that prevents HSV and HPV infections along with HIV may exhibit greater efficacy than an HIV-only product and may even be of greater interest to women.

Over the years, Council scientists have worked to develop HIV prevention products understanding the importance of women’s choice. Before ARVs were tested for topical protection, microbicides were all non-ARV-based [12]. Like all other early generation non-specific microbicides, the Council’s non-ARV microbicide, Carraguard (comprised of the seaweed polysaccharide carrageenan [CG]) was not effective at significantly preventing HIV infection in women [13, 14].  Nonetheless, CG proved to be highly effective against HPV in animal models and women [15-19], possess some activity against HSV in vitro and in animals [20, 21], and assist in the delivery and activity of other antiviral agents [12, 22].

Although the Council went on to develop ARV microbicides with strong preclinical activity based on the non-nucleoside reverse transcriptase inhibitor MIV-150) [12, 19, 22-32], we always retained an appreciation of the importance of giving women options in how they protect themselves, and we never lost sight of the role that non-ARVs and MPTs have to play. Compared to ARVs, non-ARVs are less likely to promote drug resistance, may afford fewer lasting side effects associated with long term use, and may be obtainable without a prescription, an important consideration for young women. Currently there are no strictly non-ARV microbicide options in the development pipeline [33].

Figure 1. A nature print of the Griffithsia algae by Henry Bradbury, 1859.

When GRFT was demonstrated to be safer and more potent than other promising lectins [35, 36], and when we were given the opportunity to work with it, Council scientists quickly developed a plan to secure funding from USAID to develop GRFT into a variety of HIV prevention products and MPTs with activity against HSV and HPV as well as HIV.

Initial efficacy results from the Council on GRFT came from Dr. Jose Fernandez-Romero’s lab. He showed that an early on-demand formulation of GRFT/CG, the vaginal gel, significantly reduced HSV-2 and HPV pseudovirus infections in murine models [21], supporting other data on GRFT for HSV prevention [37]. However, rather than test gels for anti-HIV activity in vivo, we explored other, potentially more acceptable (e.g. less bulky and costly; more discreet), formulations for on-demand vaginal protection. The right formulation also had to ensure the stability of GRFT, a protein with high oxidation susceptibility.

To achieve these goals, Dr. Thomas Zydowsky, Senior Scientist and Director of Biomedical Research and Pharmaceutical Development at the Council, initiated a collaboration with Dr. Manjari Lal at Seattle-based PATH to formulate GRFT and CG in a stable, freeze-dried, fast-dissolving vaginal insert (FDI, Fig. 2). Ideally, the FDI should dissolve within minutes, releasing GRFT and CG into the vaginal fluid as a gel to spread throughout the vagina. Working together with Dr. Ugaonkar in the Zydowsky lab at the Council, Dr. Lal demonstrated that GRFT/CG could indeed be formulated in an FDI and that GRFT remained stable in the FDI even under high stress conditions, such as the elevated temperature and humidity sustained in many developing countries [38].

Once two lead FDIs emerged from stability testing, we began testing in animal models for safety, pharmacokinetics (PK), pharmacodynamics, and antiviral efficacy. Excitement built as each test produced positive data. These data form the results of the Nature Communications manuscript associated with this post.

First, we demonstrated that the FDIs are safe, produce expected PK profiles in vivo, and prevent HSV and HPV infections. Dr. Fernandez-Romero showed that like for the gel formulation, FDIs administered four hours before virus challenge, significantly reduce vaginal HSV-2 and HPV psuedovirus infections in mice. Dr. Teleshova showed that the FDIs do not promote vaginal inflammation in rhesus macaques, and that high concentrations of GRFT are achievable in macaque vaginal fluids and sustained up to eight hours after FDI insertion. Drs. Fernandez-Romero and Teleshova together confirmed that the macaque vaginal fluids possess potent anti-HIV activity in TZMbl cells and in the mucosal targets of infection using a tissue explant model.

My lab then carried the lead FDI forward into anti-HIV testing in the SHIV SF162P3 macaque model of HIV transmission. To push the limits of the product to prevent SHIV infection, we used an enhanced susceptibility model in which macaques are first treated with depot medroxyprogesterone acetate (DMPA). DMPA thins the vaginal epithelium and increases macaques’ susceptibility to vaginal SHIV infection [39]. Concurrent with high susceptibility, ten of ten macaques vaginally challenged four hours after FDI insertion became infected with SHIV in the presence of the placebo (CG only) FDI. In contrast, only two of ten macaques challenged in the presence of the GRFT/CG FDI became infected. No difference in these animals’ viral loads compared to the controls was noted. Upon checking whether the two transmissions in presence of GRFT were due to selection of a unique viral variant in the inoculum with reduced GRFT sensitivity, we could find no evidence of GRFT-dependent selection. While GRFT has been shown to have an excellent resistance profile [40], additional work on selection and resistance will be needed with more animals and more sequence data.

The highly significant protection from vaginal SHIV transmission in a high susceptibility macaque model combined with highly significant protection from HSV and HPV indicated high promise for the GRFT/CG FDI as a clinical product. We decided to probe GRFT’s safety even further to enable phase 1 clinical testing of GRFT/CG, first as a vaginal gel and then as an FDI. The resulting safety/toxicology data, also contained within the Nature Communications manuscript, are confirmatory. The gel trial is underway (NCT02875119), and we are currently planning and seeking funding for phase 1 testing of the FDI.

We know that women want and need choices for contraception. Why wouldn’t they want choices in their HIV and STI prevention toolbox? The GRFT/CG FDI is one more step towards stemming the HIV pandemic by keeping women’s preferences and lifestyles in the picture.

This work was made possible by the generous support of the American people through the President’s Emergency Plan for AIDS Relief (PEPFAR) and United States Agency for International Development (USAID) via Cooperative Agreement AID-OAA-A-14-00009. The contents of this post and the associated article are the sole responsibility of the Population Council and do not necessarily reflect the views of USAID or the United States Government.

The Population Council conducts research and delivers solutions that improve lives around the world. Big ideas supported by evidence: It’s our model for global change.

19.       Rodriguez, A., et al., In vitro and in vivo evaluation of two carrageenan-based formulations to prevent HPV acquisition. Antiviral Res, 2014. 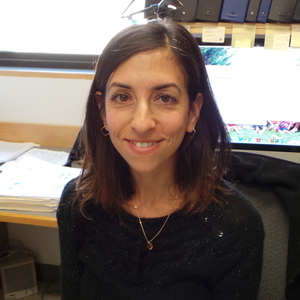