Most scientists would agree with Thomas Edison that innovation is the result of 99% perspiration and 1% inspiration. Sometimes however serendipity also has a large part to play in landmark discoveries.

Our discovery of a portal in feline calicivirus, comprised of the minor-capsid protein VP2, revealed a breath-takingly beautiful structure that is likely conserved across the entire virus family, which includes the notable human pathogen norovirus. We were able to describe the structure of this previously enigmatic protein and propose a function – mediating endosome escape by delivering the viral genome across the endosomal membrane to initiate infection. This is without doubt the most exciting discovery of my career thus far. When I first presented our work at the Glasgow Virology Workshop in January 2018, there was an audible gasp from the audience. Discussing our finding with University of Leeds Professor of Virology Dave Rowlands afterwards, he observed “it sounded as if you sort of stumbled across it…” and to be honest we did.

We first began investigating calicivirus entry over ten years ago. Human caliciviruses are notoriously difficult to propagate in the laboratory. We therefore chose to study feline calicivirus (FCV) – a much more tractable model system. At that time FCV was the only calicivirus for which a protein receptor had been identified – feline junctional adhesion molecule A (fJAM-A). Working in collaboration with Ian Goodfellow, we set out to provide a detailed description of the virus-receptor interaction by performing cryo-EM and 3D image reconstruction of purified virions decorated with a soluble fragment of fJAM-A. We found that receptor engagement led to conformational changes in the capsid that break icosahedral symmetry. This led us to hypothesise that these changes were a priming event, that prepared virions for uncoating following endocytosis.

Cryo-EM has undergone a technological revolution in recent years, allowing us to determine protein structures at close to atomic resolution. Despite these advances however, the loss of symmetry brought about by receptor binding confounded our efforts to achieve an atomic resolution model of FCV bound to fJAM-A.  A highly motivated and intelligent PhD student, Michaela Conley, had joined my group to work on this project and had collected a large cryo-EM dataset at the Astbury biostructure laboratory in the University of Leeds. From these data Michaela had calculated an atomic model of the FCV virion in the absence of receptor, but the fJAM-A labelled reconstructions remained stubbornly blurred – a consequence of the imposition of icosahedral symmetry causing incoherent averaging in the 3D reconstruction process.

I presented Michaela’s data at a symposium in Leicester University, held to celebrate the inauguration of their cryo-EM facility. This meeting will be forever ingrained in my memory and has a place in cryo-EM history. Having given my own talk, I was listening to James Conway talk about the structure of herpes simplex virus. Sitting directly in front of me was cryo-EM pioneer Richard Henderson. In the middle of James’s talk, Richard leapt up and hurriedly left the seminar room. I wondered if he had taken ill. Shortly afterwards, it emerged that Richard had left to take a phone call from Stockholm advising him that he had been awarded the Nobel prize in chemistry, for his role in establishing cryo-EM as a means of solving the structures of biological macromolecules.

Amid the hubbub surrounding Richard’s prize, I was approached by Sjors Scheres, author of the ground-breaking cryo-EM software RELION. He had been thinking about the difficulties we were having with broken symmetry and had an idea that we may be able to reconstruct the different conformations of individual capsomeres using his software.

By this time Michaela had completed her PhD work and was a post-doc with my colleague Sheila Graham, so I set about implementing Sjors’ suggestions. Initially I was sceptical that such small differences could be resolved in the context of a larger symmetrical entity, especially considering the noisy nature of cryo-EM data. The process of symmetry-expansion and focussed classification was computationally demanding and required considerable experimentation to achieve. Eventually however, I began to see tantalising signs that the process was working. I set up an experiment to iteratively classify and reconstruct individual dimeric capsomeres labelled with fJAM-A. After several weeks of processing, I was sat at my workstation inspecting each reconstruction in turn, when I had one of those moments that scientists live for. I opened one of the map files and saw, just next to the capsomere a large cylindrical structure extending from the capsid surface. Within seconds I was inviting my colleagues to ‘Come and see something really cool’. From this first view of the calicivirus portal in December 2017, the process of model building and interpretation was rapid, our paper was ready for submission by the summer of 2018.

We did not set out to solve the structure of VP2 and had no inkling that a calicivirus portal might exist. Nonetheless, our studies of a feline respiratory virus, which could justifiably have been described as ‘niche’, have yielded a discovery that transforms our understanding of the critical early stages of infection in the caliciviridae. Our findings also have broad implications for virus structure research. It is becoming increasingly clear that deviations from icosahedral symmetry are central to the biology of spherical viruses. New methods to interrogate asymmetry in icosahedral viruses open the door to many more exciting discoveries.

Michaela Conley gives her own account of our discovery in the related post Breaking the shackles of symmetry to study calicivirus endosome escape - The Early Career Researcher’s perspective. 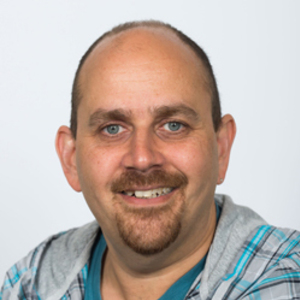 Ben Johnson about 2 years ago

What a fascinating story! Ian used to work in the lab next door when we were both at Reading so I have had a long interest in his cat virus :)

Thank you for suggesting that Michaela also told her story from the ECR perspective. This pair of Behind the Papers works very well and I think we will now suggest this to other authors!