Intrigued by the fact that Pseudomonas aeruginosa is able to accumulate large amounts of oleic acid-derived oxylipins when cultured in the presence of oleic acid, we decided to undertake the study of the role of these molecules in this bacterium’s physiology. It never escaped to our attention that oxylipins, which results from the oxygenation of unsaturated fatty acids, are the more important lipid mediators in eukaryotic organisms, where they play multiple roles as signaling molecules. Oxylipins, such as prostaglandins and leukotrienes, are well known mediators of inflammation, fever, pain and other immunomodulatory functions in mammals. They also are important in plants and fungi, where they regulate processes such as stress resistance mechanisms and ontogenetic development. Therefore, we suspected that oxylipins were not mere accidental byproducts of P. aeruginosa’s secondary (and very versatile) metabolism. Soon after we started the study of oxylipins’ role in P. aeruginosa in 2015 we found that these molecules downregulate flagellum-driven motility and upregulate type IV pilus-driven motility (twitching motility), which promotes biofilm formation (see original publication here). In the same study we found that oxylipins promote virulence of this bacterial opportunistic pathogen using the Drosophila melanogaster insect model of infection and later corroborated in a rat model (unpublished).

In further investigating how P. aeruginosa-produced oxylipins function to control these processes we learned that oxylipin production is regulated by a positive regulatory loop in P. aeruginosa that is dependent on cell density. This result rang a bell to my long standing colleague Eriel Martínez that we could be dealing with an undescribed quorum sensing system that uses oxylipins as autoinducer molecules for signaling. This was the hypothesis driving our study, which turned out to be correct. We found that this oxylipin-dependent quorum sensing system (termed ODS) controls the expression of genes encoding several putative oxidoreductases, dehydrogenases, a protein kinase, a putative aminoglycoside phosphotransferase and a nitric oxide reductase, among others, whose putative functions suggest that they might be involved in metabolic adaptation of P. aeruginosa to the host environment, as well as resistance to oxidative stress, nitric oxide toxicity and antibiotics.

Our study provides the first evidence of a quorum sensing system regulated by oxylipins in bacteria and of oxylipins being used as signaling molecules in prokaryotic organisms. The fact that ODS has not been previously identified in a widely studied model of quorum sensing such as P. aeruginosa, highlights the importance of approaching the study of quorum sensing under conditions that better reproduce the bacterial natural environments. ODS operates as an environment-specific quorum sensing system since it requires exogenous oleic acid as a precursor for the biosynthesis of the autoinducers. This is an interesting strategy through which P. aeruginosa avoids responding indiscriminately to high cell density by regulating the appropriate subset of genes required for a particular niche. Oleic acid is a fatty acid present in very specific niches, such as decaying biomass and within living organisms. We believe that oxylipins could mediate cell-to-cell communication in other bacterial species, since we have identified genes homologous to the diol-synthase enzymes (which drive the synthesis of oxylipins) in other bacterial species.

Our findings indicate that disrupting oxylipin production by P. aeruginosa could be a good therapeutic strategy against a bacterial infection the World Health Organization (WHO) has named a serious threat to human health. This is important because we can design a new generation of antibiotics that target the oxylipin pathway. We have already developed a high throughput assay at Southern Research to identify small molecules that block the production of oxylipins in P. aeruginosa and have identified a couple of promising compounds. Our purpose is to develop a new generation of antibiotics that do not directly kill the bacteria, reducing the odds that it will develop resistance to the drug, we rather want to disarm the bacteria, so that the immune system takes care of the bacteria by itself. 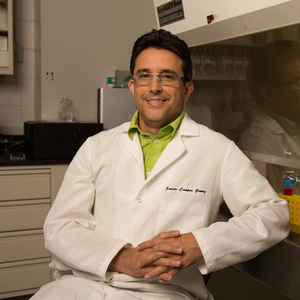