Insane in the membrane

Bacterial membranes provide both an remarkable effective physicochemical barrier and a prime target for antimicrobials. Therefore, understanding the mechanisms by which bacteria create and maintain their membranes is of paramount importance.

Whilst attempting to avoid overly clichéd fearmongering, antimicrobial resistance is currently one of the largest threats to human life, and resistance continues to increase. The first line of defence that bacteria have to whatever we may throw at them is their cell envelope. For Gram-negative bacteria, the cell envelope consists of two membranes. The outer membrane consists of an asymmetric bilayer with lipopolysaccharides (lipid anchored sugar chains) in the outer leaflet and phospholipids within the inner leaflet. This provides an incredibly effective physical barrier, preventing harmful molecules from entering the cell and protecting the bacterium from osmotic damage. In contrast, the inner membrane consists of phospholipids which segregate the cytoplasm, within the cell, from the periplasm, between the two membranes. Despite the effectiveness of the Gram-negative membrane in preventing unwanted materials to get inside the cell, our understanding on the biogenesis of these membranes remains poor.

It is this question that we set out to investigate. Specifically, if we can understand how phospholipids are delivered to the cell envelope and which pathways are involved in their transport, then we could potentially identify targets for disruption which would allow antimicrobials, to quote popular culture, to break on through to the other side. There have been several recent reports suggesting that the ‘Maintenance of Lipid Asymmetry’, or Mla, pathway was responsible for removing phospholipids from the inner leaflet of the outer membrane, assisting in maintaining the integrity of the cell envelope. This pathway consists of three components: MlaA, anchored to the inner leaflet of the outer membrane; MlaC, a periplasmic lipid-binding protein; and the MlaFEDB complex situated within the inner membrane. When we started our investigations into this pathway, it was generally accepted that MlaA passed phospholipids to MlaC in the periplasm, which in turn delivers them to MlaFEDB in the inner membrane. While there had been evidence supporting this hypothesis, phospholipid transport by the Mla pathway had not been directly observed.

We had been developing methodologies to anchor membrane protein complexes to gold surfaces, allowing their reconstitution into lipid bilayers enabling investigation of their function in a relatively realistic environment. Armed with some purified MlaFEDB and MlaC (with and without phospholipid bound) we set off to see if we could use this methodology to gain some insight into the direction of phospholipid trafficking by the Mla pathway. We hoped that by measuring changes in mass adsorbed to the gold surface, we could measure the addition of phospholipids to the bilayer as they are passed from MlaC to the membrane-bound MlaFEDB.

As most scientists know, it is a rare event that a new phenomenon is stumbled across. Rarer still, when the experiment produces precisely the opposite result as suggested by the literature and that this is actually an exciting event, not met with usual grumbles of disappointment. Nonetheless, this is precisely what happened. The anchoring of MlaFEDB to the gold surface went as expected, and it looked like we had successfully reconstituted the complex within a lipid bilayer. Good start! We next injected MlaC with phospholipid bound over the MlaFEDB-containing bilayer and waited expectantly… Nothing. No changes in mass. Our initial thought was that we prepared the sample wrong, so we optimistically prepared another sample and tried again and, surprisingly, got the same result. Now thoroughly disappointed, we thought we might as well run the ‘control’, injecting MlaC without phospholipid bound over the bilayer. Almost immediately, we saw that the mass started to decrease. Gareth Hughes and myself glanced at each other briefly, slightly sceptically if truth be told, before being totally engrossed by a bunch of wiggly lines progressing on the screen. Could it be that MlaC is actually removing phospholipids from the bilayer? We repeated the experiment and saw exactly the same result.

What followed was a truly Herculean effort, spanning multiple disciplines and institutions, to provide evidence to back up our initial observations that MlaC does indeed pass lipid to MlaFEDB and try to provide some understanding as to how and why this happens. The results of this work have today been released in Nature Microbiology. Collaboration is essential in science, and this study is a perfect example of that at its finest. It has been an honour to have worked with this fantastic team of people, from professors to undergraduates and everyone in-between, all equally determined to unravel just one small pathway amongst the countless, unimaginably complex processes occurring in one of the simplest forms of life. 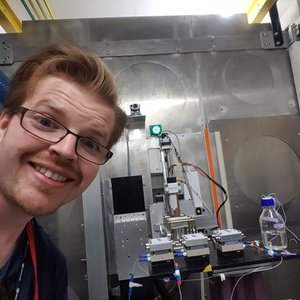