Functional Resilience of Microbial Communities from the Atacama Desert, Chile, in the Face of Climate Change

Microorganisms in the natural world live in complex communities called microbiomes. As we would like to manipulate microbiomes around - and inside - us to our benefit, we first need to understand what really happens when we suddenly shake them up.

Scientists have studied individual microorganisms in great depth, but microorganisms in the natural world do not exist in isolation. They live in flourishing and complex communities called microbiomes, which play major roles in almost every biological process on the planet. And yet we know embarrassingly little about them. What leads to toxic algae blooms and how do we control them? What effects can antibiotics or a sudden diet changes have on our gut microbiome and ultimately our long-term health? We would like to quickly manipulate microbiomes around and inside of us to our benefit, but first we need to understand what really happens when we suddenly shake them up.

Just like medical research uses mice and stem cells, we study fundamental microbiome processes using relatively simple microbial communities inhabiting salt rocks in the Atacama Desert, Chile. The Atacama Desert is one of the driest places on Earth with rains occurring only once every 20 years. And yet, in this extreme desert, microorganisms have adapted to survive and even thrive inside porous salt rocks. In their unique environment, they get the water they need from atmospheric moisture that enters the rock’ pores. However, in 2015 the biggest rainstorms ever recorded in Northern Chile – as the result of climate change - decimated these highly specialized extremophiles.

Salt rocks, also called halite nodules, found in Salars of the Atacama Desert, Chile. The rocks are 20 to 50 cm in size and inhabited by a diverse community of salt-adapted archaea, bacteria, and unique algae.

Our team used used next-generation DNA sequencing to track the community composition and functioning in the salt rocks over 4 years, capturing changes before and after the rain ((Uritskiy et al., 2019). By looking at their response and recovery from this disaster, we were able to uncover the secrets to their rapid adaptations to such a sudden event. We found that while the rain shook them up significantly, their general composition gradually recovered over the course of the next year. However, the recovered communities were somehow composed of a seemingly random set of new microbial species which were previously only observed in very low abundances, despite the community functioning the exact same way as before. How is this possible?

Imagine the microbiome as a business that was hit with a tough recession. Budgets are cut, and most of the employees are laid off. After the recession is over, the old positions are re-opened but since most of the old staff have already moved onto other jobs, new qualified employees are taken onboard. And so, after some recovery period the company resumes its regular activities, despite being comprised of a completely new set of workers. In effect, this is exactly what happened in our model microbiome - the catastrophic rain freed up “job positions” for microbes that previously lay dormant, waiting for their chance.

Dissolution puddle in a halite field after a major rain event, illustrating the challenges faced by microbial communities inhabiting these salt rocks.

We learned that just like that company was restructured by the recession, sudden changes in environment can have permanent effects on microbial communities. Our modeling and quantitation of this “employee turnover” effect can be applied to any situations where sudden changes are important, such as in recovery from antibiotics, diet changes, or even natural disasters.

However, it took up to 18 months for our salt microbial communities to functionally recovered and there is no telling what might happen as major storms are becoming more frequent across this part of the world....

This story was written by Gherman Uritskiy, graduate student. 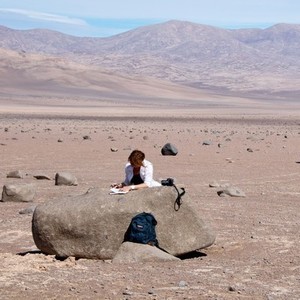 Ricardo Cavicchioli over 1 year ago

What a clever anthropocentric depiction of a microbcentric view resulting from anthropogenic climate change. Congrats to graduate student Gherman - a lot of hard work and really valuable insight into microbial community responses from the continuing Atacama Desert time series from Jocelyne Diruggiero's group.

Kshitij V over 1 year ago

Absolutely enjoyed the engaging analogies provided by Gherman. Curious to know, how niche/specialized the roles that need to be filled vs the new taxa that are available. To extend the analogy provided, a the seniority/specialization of a job position vs the labor market available. Look forward to reading the paper cited in greater detail!