As one of the most ice-dependent Arctic marine mammals, polar bears (Ursus maritimus) are an iconic species of climate change. The media is peppered with evidence of the damaging effects of climate change on this sentinel species, often citing habitat loss, shifts in prey availability/abundance, and transitions in inter-species interactions. We know that polar bears require sea ice for long-distance movements and accessing their typical prey items of ringed seal (Pusa hispida), bearded seal (Erignathus barbatus) and occasionally beluga whale (Delphinapterus leucas). We also know that for polar bears belonging to the southern Beaufort Sea subpopulation, substantial declines in the spatial and temporal availability of sea ice in summer and fall (extending well beyond the biologically productive continental shelf) have driven a divide in polar bear behaviour. Some bears continue to select the retreating ice habitat to hunt ('offshore bears') while others instead adopt a novel behaviour for this subpopulation and move to coastal onshore habitat during the reduced ice period (‘onshore bears’). For some researchers, this alarming divide in behaviour prompted the notion that to we need to act fast and think big, for a few of us however, it impelled us to think small. Microscopic, in fact.

The gut microbiota, the community of bacteria inhabiting the gut, has a long co-evolutionary association with its host, and plays a critical role in individual health. In effect, the regular intestinal development and function of an individual is attributed to an array of specific bacterial groups or species, the composition and diversity of which are a function of complex interactions between host and environment. Onshore bears are associated with a range of dietary items that offshore bears are unable to access, notably ‘bone piles’, the remains of locally-harvested bowhead whales (Balaena mysticetus), along with the carcasses of fish, birds and caribou (Rangifer tarandus). As a major driver in changes to the gut microbiota, shifts in diet have the potential to alter polar bear gut microbiota diversity and composition. Additionally, dietary changes have the capacity to alter contaminant and parasite profiles within polar bears, factors which are also linked to changes in microbial diversity and composition. Despite our understanding of the importance of the gut microbiota to health, little is understood of the composition or community structure of the polar bear gut microbiota, and our research investigated the differences in gut microbiota diversity and composition between free-roaming on- and offshore polar bears.

For this project we teamed up with Dr Todd Atwood and his colleagues at the United States Geological Survey (USGS) who darted polar bears and obtained faecal samples along with associated individual metadata (age, sex, body condition).

Our research revealed that for southern Beaufort Sea polar bears, alpha diversity and bacterial composition are significantly different in the gut of onshore bears compared to offshore bears – i.e. those that exhibit the ‘normal’ behaviour of remaining on the sea ice year-round. Specifically, we see a significant increase in diversity in onshore compared to offshore bears. The results indicate that in the face of rapid climate change, tight host-gut microbiota associations are quickly becoming decoupled, potentially negating millions of years of co-evolutionary adaptation. To the best of our knowledge, our work shows for the first time that global change driven alterations in habitat use are associated with changes in the gut microbial composition and diversity of a free-ranging species. The differences in gut microbiota composition between on- and offshore bears is most likely driven by differential exposure to the environment, such as diet, contaminants and parasites, which are known to differ between the two groups. However, more work needs to be conducted in order to shed light on the root of these differences.

Understanding the ways in which polar bears respond to climate change mediated displacement from primary habitat is crucial in discerning their ability to cope with an increasingly changeable and uncertain environment. Considering that anthropogenic pressures on wildlife are abundant globally, we hope this study highlights the need for more wildlife-microbiota work to assess the extent of this impact – especially for our most vulnerable and endangered species. 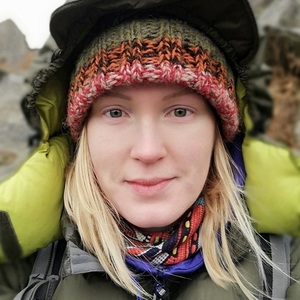