When diatoms get sick

Half of the oxygen we breathe is produced by microorganisms in the ocean – a contribution that rivals that of terrestrial plants. Marine diatoms, single-celled, photosynthetic eukaryotes, produce 40% of this oxygen. Characterized by their unique requirement for silicon, diatoms have been admired since the Victorian era for their intricately designed, beautiful glass cell walls of amorphous silica. Denser than seawater, these ‘glass houses of the seas’ are responsible for a substantial portion of the vertical flux of organic matter out of the surface ocean, sequestering atmospheric carbon dioxide in the deep ocean.

We wanted to understand the factors that mediate death in diatoms – in particular, the role of viruses. Once thought to be immune to viruses due to the physical protection afforded by their glass-based armor, diatoms, it turns out, can be infected by viruses—viruses that are among the smallest on the planet and long escaped detection by traditional methods. High throughput sequencing technology and the isolation and cultivation of diatom host-virus systems have set the stage for a comprehensive interrogation of diatom host-virus interactions.

The “DYE labeling of diatom silica” (DYEatom) cruise, led by PI Jeff Krause, went to sea in 2013 as a multidisciplinary and collaborative effort to capture silicon cycling dynamics in the early summer diatom blooms in the California Current Ecosystem (CCE) and to collect samples that would later be used to explore viral infection in these diatom populations. Using metatranscriptomic analysis, we first identified and quantified diatom viruses associated with these populations – those presumed to be actively infecting and replicating. We found geographically distinct regions that ranged from uninfected populations in the north to highly infected populations in the south. Furthermore, biological and chemical metadata collected along the cruise track indicated a recent mortality event in the northern populations, but was this caused by diatom viruses?  To answer this question, we needed to quantify the extracellular virus abundance – the viruses that would have been released into the environment upon host lysis. Leveraging the resolution provided by the metatranscriptomic analysis, we targeted each extracellular diatom virus using quantitative PCR.  Together, the cell-associated and extracellular diatom virus abundance enabled the diagnosis of early, active and lytic stages of infection along the cruise track and further supported our hypothesis that the death we observed was indeed virus-mediated.

To our knowledge, this is the first time different stages of infection have been characterized in natural diatom communities and suggests that these populations may be terminated by viruses. We were curious why some stations appeared more infected than others. Were there conditions that promoted viral infection? Or ones that prevented it? Considering all of the chemical and biological parameters that were measured during the DYEatom cruise, we found that the degree of silicon (Si) limitation was the strongest predictor of infection – viral infection increased as the populations became more and more silicon limited, culminating in a virus-mediated mortality event in the most severely Si-limited populations. This relationship was further supported by laboratory experiments in which Si limitation of a model diatom host accelerated virus infection and mortality.

We are excited about these findings for several reasons.  First, they place diatom viruses as active participants in diatom bloom dynamics. Second, this work contextualizes diatom host-virus dynamics within the ecophysiological framework of Si availability, highlighting the importance of nutrient regime in host-virus dynamics. And finally, accelerated virus-induced mortality in Si-limited waters may have significant biogeochemical consequences, weakening the efficiency of the biological pump, stimulating the microbial loop and promoting the retention of Si and carbon in the surface ocean.

The above image depicts a chain of individual diatom cells collected during the DYEatom cruise and stained with a fluorescent dye to show newly formed cell walls (blue). Chlorophyll autofluorescence is shown in red.  Image credit: Jeffrey Krause and Eric Lachenmyer 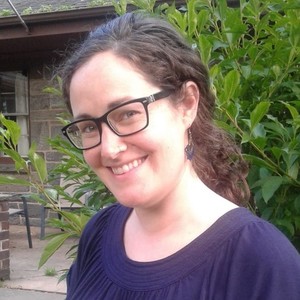