Antimicrobial resistance is considered by the World Health Organisation as among the major global threats to human health. A predicted 10 million human deaths per year will by 2050 be attributed to infections with bacteria that evolved the ability to withstand antibiotics, if resistance continues to spreads among human pathogens at the current rates. To come up with suitable mitigation and intervention strategies it is crucial to understand the conditions under which resistant bacteria are positively selected for.

Studies to date concluded that antibiotics at extremely low concentrations can select for resistance mechanisms in single strain experiments. However, these tests barely mimic natural environments where bacteria are embedded within complex communities consisting of thousands of bacterial species. In our study we overcame this limitation and showed that competing with other community members increases the minimal selective concentration for antibiotic resistance in a focal species.

To collect the model community used in the experiments I visited a farm early on in the study, where I got to enjoy the company of some very curious Cornish black pigs to collect some faecal samples. While scooping up the fresh samples I overheard a father telling his young daughter to better pay attention at school, otherwise she would also end up having to collect poop for a job in the future. If he would have just known that both are not mutually exclusive and that being a poop collector can actually be quite a blast once in a while. However, the technicians in our lab might share his aversion to faecal work, after a large batch of faecal samples over boiled in one of the autoclaves once during the project.

Once the community was extracted though, we competed an isogenic pair of E. coli, differing exclusively in a single antibiotic resistance gene, in anaerobic bioreactors with the community either present and absent, to discover which of the two strains (susceptible vs. resistant) had a selective advantage across a gradient of antibiotics. We discovered that being embedded in a microbial community does indeed lower the selective potential for the strain with resistance to antibiotics. However, results were not consistent for the two different antibiotics tested. While the fitness of a gentamicin resistant strain was reduced across the whole antibiotic gradient tested, a kanamycin resistant strain only lost the fitness advantage over its susceptible counterpart at intermediate antibiotic concentrations.

To gain insights into the mechanisms underlying the observed dynamics we then grouped up with Dr. Mario Recker for mathematical modelling and Prof. Tong Zhang & Xiaole Yin at the University of Hong Kong to perform metagenomic analysis of resistance gene profiles of the microbial communities. Using these complementary methods, we were able to finally identify two major mechanisms that cause the reduction in selection for antibiotic resistance in complex community context: First, a general increase in the metabolic cost imposed by encoding the resistance mechanism in the resistant strain while competing with other community members, and second, the community providing protection to the susceptible strain to withstand the antibiotic pressure more efficiently.

Our results stress that, when assessing the risk of antibiotic concentrations for selection of resistance genes as well as their potentially pathogenic hosts, it is crucial to take environmental considerations, like complex community context, into account.

Credit for the bacterial drawings in the poster image go to Ellie Pursey. 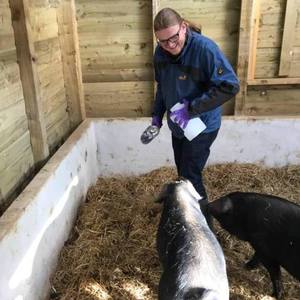