Context, behind the scenes, and unexpected research path behind phytoplankton bloom dynamics study

“Have you ever seen anything like this before at SPOT?” I asked a colleague, Alle Lie, when we looked at our initial sample, the first of what would be ~60 samples we collected at the San Pedro Ocean Time-series (SPOT) off of southern California between March and August 2011. The seawater was unusually cloudy and a slight bit green and we could see the red eyespots of copepods as they buzzed around in the sample as it sat in borrowed lab space at USC’s Wrigley Institute for Environmental Studies on Santa Catalina Island. 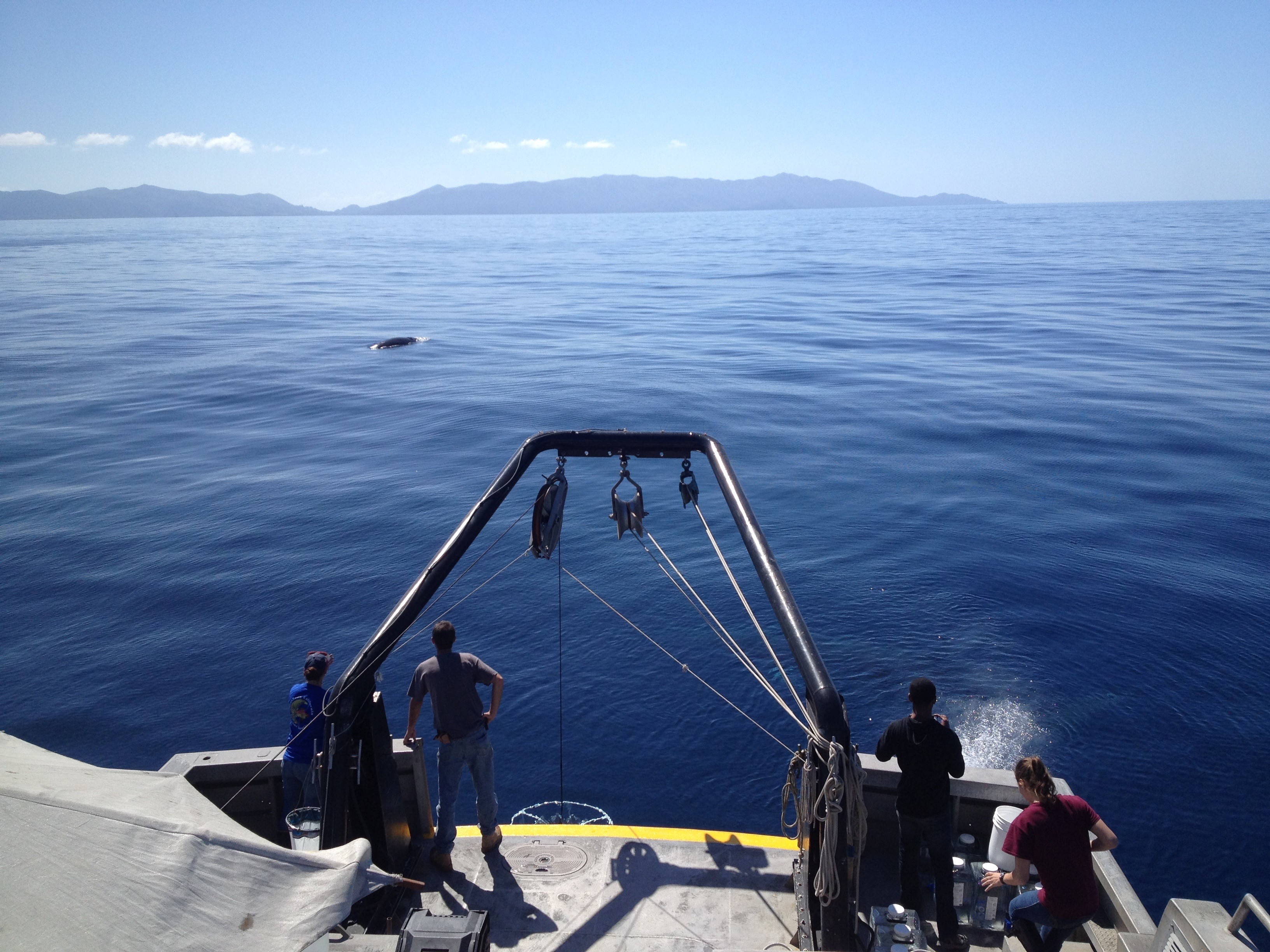 Of course, we expected relatively rich conditions given that March is a productive month at SPOT, but our initial chlorophyll measurement of ~10 µg/L is the highest discrete value measured over 15 years of monthly samples at SPOT. It’s not that the events of this scale are rare (they happen most years), but they are very ephemeral; our best guess from satellite measurements is that blooms of this magnitude typically only persist only over a few days at SPOT in a given year.

8-day average MODIS satellite chlorophyll a concentrations at SPOT 2002-2013 shows that chlorophyll is usually low (~0.2 µg/L), but very often has spring time peaks (above 5 µg/L). The date in red indicates the peak associated with our daily time-series study in 2011.


Almost all of the samples were collected from the commuter ferry Miss Christie, Captained by Gordon Boivin and occasionally Trevor Oudin. At 7:30AM, we would depart from the Port of Los Angeles (the largest port in the USA), typically loaded with 25-30 sleepy school children prepared to see Wrigley, where they would hear about on-going science, and snorkel or kayak around Catalina’s pristine kelp forests. About 2/3 of the way into the ~50km trip, we would make a 5-10 minute stop to collect 20L of water by tossing a bucket over board a few times, measure the temperature, and continue the 35 minutes to Catalina, where we trudged the 20kg of water up the seemingly giant hill to the lab. 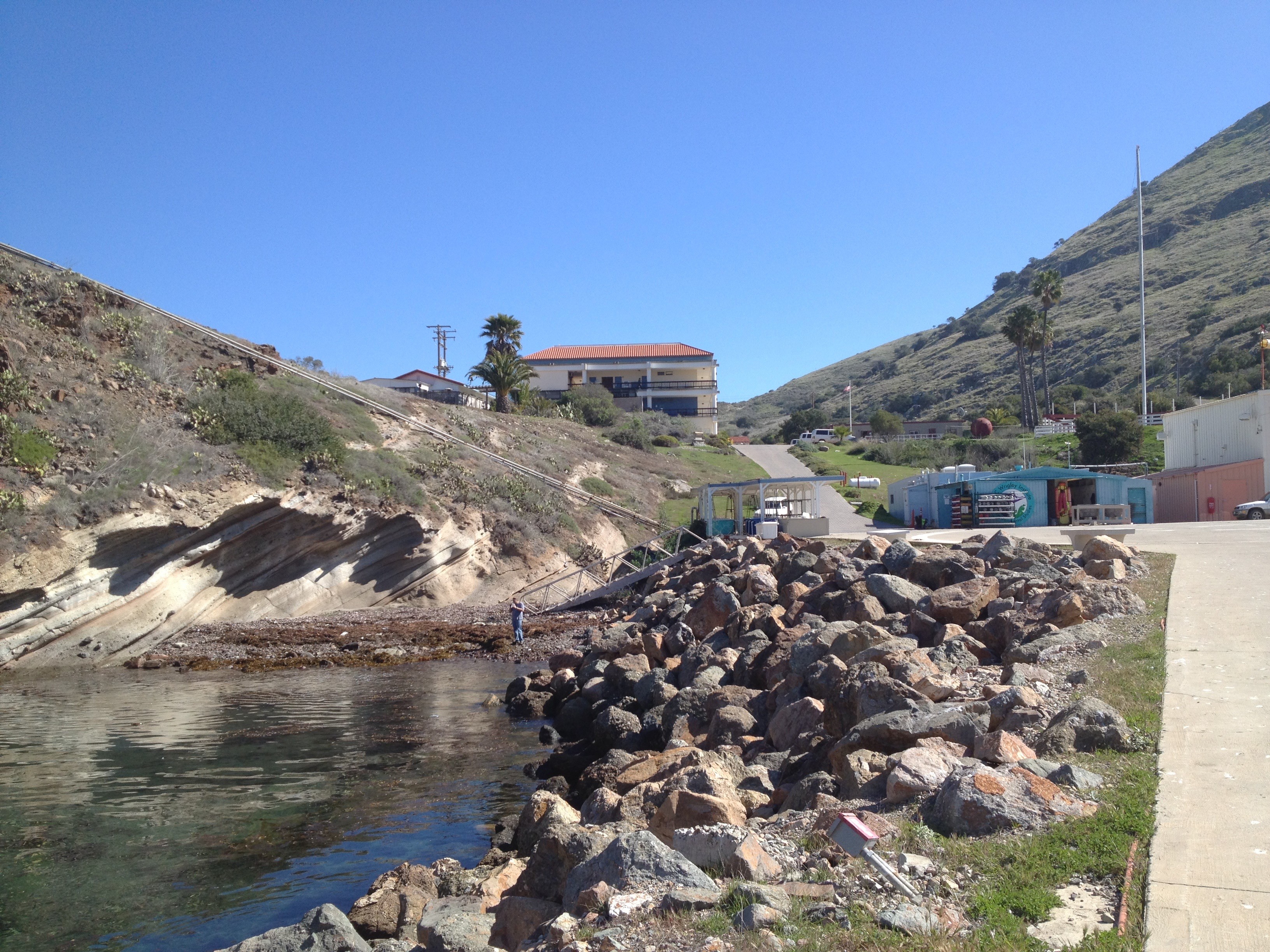 View of the lab at the Wrigley Institute for Environmental Studies from the water front. Note the large, steep hill on the path to the lab.

For this particular study, we processed the samples by filtering several liters of water for size-fractionated DNA samples, collecting for dissolved nutrients, measuring phytoplankton biomass, and preparing microscopy slides for bacterial and viral total counts. Over the course of the study, many undergraduate and graduate students, and even the first mate of the Miss Christie helped with the sampling of this extensively sampled project. Of course, truly daily samples would have been ideal during March, but we missed a few dates due to weather (2 days) and the boat not commuting on Sundays.

As for the science, our goal was to examine the dynamics of the bacterial and archaeal communities during spring-to-summer as well as their top-down and bottom-up controls, including protists and viruses. Using primers which enable observation of all 3 domains (quite accurately, as we’ve shown, see Parada et al. 2015), we first focused on the free-living bacterial and archaeal communities via 16S and noted, as expected, Roseobacteria and Flavobacteria associated with the bloom conditions. However, we were surprised to see that Marine Group II Archaea peaked to over a few days to ~40% of the sequences halfway through the March daily time-series. While Archaea were once thought to be extremophiles, we now know that one lineage, nitrifying Marine Group I (or Thaumarchaea), numerically dominate below 200m in the ocean. While the distribution and niche of Marine Group II, with no cultured representatives, remains less well understood, although some studies have indicated they may be enriched on particles in the water. Therefore we soon sequenced the larger size fraction samples to see if this mysterious group was even higher there. 50%? 70%? No, they were approximately the same proportion of bacterial/archaeal sequences there, but on this size fraction we noticed the bacterial/archaeal dynamics were unexpectedly rapid. Further, our primers indicated something else unexpected: on average, 40%, and up to 70%, of the 16S sequences on the particle attached fraction were of chloroplast origin, and the dominant taxon via chloroplast identification changed on a nearly daily basis early in the time-series, including very high sequence similarities to a “who’s who” of toxic algae relatives and taxa known to form extensive blooms along the West Coast of the United States. Despite a century studying blooms, this didn't fit with the conceptual model of 'generic' diatom blooms transitioning gradually to smaller taxa over weeks. Although we did not intend at first to study phytoplankton, this surprising result fell into our laps. We also had some other surprises, such as highly related diatom species (probably too close to distinguish by microscopy) with quite different ecological dynamics. We found that the traditional view that blooms are controlled by physics and chemistry was only part of the story, since the other microbes apparently play a major role as well. 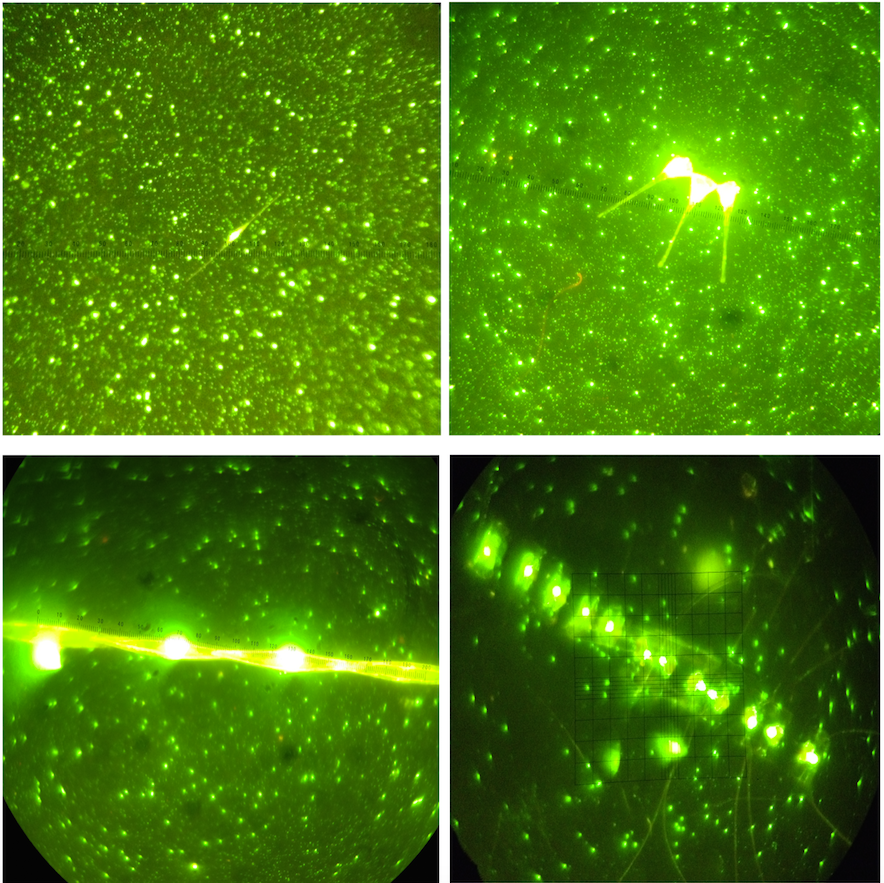 Epifluorescence microscopy images of diverse phytoplankton, bacteria, archaea, and viruses collected from the San Pedro Ocean Time-series. We show in the accompanying report that multiple micro-organisms like these can vary rapidly (dominance changing from day-to-day at a single oceanic location) following a spring bloom, likely the consequence of competition, predation, and other apparently strong ecological forces.

We thank the Wrigley Institute for Environmental Science, the National Science Foundation, and the Gordon and Betty Moore Foundation

Andrew Jermy
over 5 years ago
Very nice David, thanks for posting!

Andrew Jermy
over 5 years ago
Hi again - I just created a new channel called 'Behind the paper', would you mind moving this post there? To do this you would click on the drop down at the top right select My posts then Edit post and select the correct channel on the left hand side. Thanks!

Nonia Pariente
over 5 years ago
Very nice post! took me back to my postdoc days in SoCal. Do you know what happened in Jan 2011? Chlorophyll levels were huge!

David Needham
over 5 years ago
Thanks, that's a very good observation, and interesting question; it does seem somewhat unusual and levels were super high, indeed. We don't know, but the data we have do provide some hints so I will speculate! :)
Our monthly SPOT cruise that month was on January 11th, 2011 and we observed somewhat elevated chlorophyll, ~2 µg/L versus ~20 µg/L for the 8 day average from MODIS. I suspect that the large bloom suggested by MODIS happened after our cruise. Generally, the water column is well-mixed during our Southern Californian "winter" months, down to at least 20 m but more typically between 30-40 m. However, this particular month, for some reason, perhaps unseasonably warm air and calm seas, the mixed layer depth was only about 12.5 m (so most of the plankton stay mixed within the well-lit waters longer) and nutrients were 2-4x higher than usual for that time of year (January is already one of the higher months). Couple that with what appears to be warming air temperatures (~6C, January 10th-15th, https://www.wunderground.com/personal-weather-station/dashboard? ID=KCACATAL2#history/tgraphs/s20110101/e20110131/mmonth , which which seems to correspond to clear skies (from UV index at LAX ftp://ftp.cpc.ncep.noaa.gov/long/uv/cities ) and relatively calm seas (not shown), and perhaps you have a recipe for a bloom!

David Needham
over 5 years ago
The correct link to the January weather nearby SPOT, for what it's worth: https://www.wunderground.com/personal-weather-station/dashboard?ID=KCACATAL2#history/tgraphs/s20110101/e20110131/mmonth

Nonia Pariente
over 5 years ago
Thanks David!!