Tangled up in actin: how the actin network in Toxoplasma gondii facilitates vesicular trafficking during replication

Toxoplasma gondii is a member of the phylum Apicomplexa that infects one third of the human population asymptomatically but in immunocompromised individuals and pregnant women can cause life threatening disease.

They are single cell obligated intracellular parasites that need a host cell for replication and survival. In order to invade the host, the parasite evolved a highly polarised architecture with secretory organelles called micronemes located at the anterior  end of the parasite.  These apical organelles  secrete  adhesins during migration and host cell invasion,  which finishes with the formation of  a specialised vacuole called the  parasitophorous vacuole in which the parasite replicate.

Replication occurs by internal budding, a process in which two  daughter cells are formed within the mother in a process called endodyogeny. After approximately 36 hours, mature daughter cells with fully assembled micronemes at the apical end are able to egress the vacuole, breaking the host cell, and invading new, nearby host cells.

The sorting and positioning of  organelles to the apical tip of the parasite during replication is a complex task. Each round of replication  requires a  highly synchronised process. It  involves the disassembly of the mother cell organelles, and de novo synthesis of apical organelles; this process is followed by  the  subsequent assembly,  and correct apical positioning of these organelles into each daughter cell. The debris and redundant material from the  mother is collected in a compartment called the residual body  (RB) that connects the daughter cells.

We were interested in understanding how the parasite, during these sequential rounds of replication, regulate organellar biogenesis that ensures that  mature single cell parasites end up with  a full  set of   functional organelles, perfectly positioned at their apical end ready for its use during invasion.

Our previous findings showed that Toxoplasma uses the cytoskeletal protein actin to form an extensive, tubular network in the parasitophorous vacuole that connects each individual parasite and is required for material exchange between parasites. This observation raised the possibility that actin-based vesicular transport mechanisms are required for daughter cell assembly and recycling of maternal organelles.

In our paper (Doi 10.1038/s41467-019-12136-2), we investigated the relationship between this novel actin network and the vesicle transport of secretory organelles. To address this question, we labelled MIC2  (microneme protein 2 a marker for microneme organelles ) with the multifunctional reporter “Halo-Tag”, while actin was visualised using constitutively expressed camel derived nanobodies tagged with fluorescent protein. By using two different Halo ligands in time intervals, we were able to distinguish maternal and de novo synthesised MIC2 and to follow the vesicle trafficking of these vesicle populations in real time.

We found that  microneme sorting  to the apical end of daughter parasites follows two  different routes depending on the vesicles origin; vesicles synthesised de novo  in the daughter cells are sorted to the apical end in an F-actin independent manner while maternal organelles are recycled from the mother to the daughter parasites  by a mobile cytosolic network, of actin tracks able to associate  transiently to regulate temporal and spatial concentration  of vesicles in specific regions of the parasite.

This network of F-actin converges in the residual body of the parasitophorous vacuole,  in which they form an intrincate network of mobile crossing tracks. Therefore, we conclude that the residual body is a sorting station that stores, redirects  and exchanges maternal material into the daughter cells to ensure that energetically costly adhesins  central for survival are efficiently recycled.

Overall, the work contributes to a better understanding of apicomplexan actin in parasite replication and demonstrates that despite being a parasite, these organisms treat their resources economic and almost quantitatively recycle their organelles. 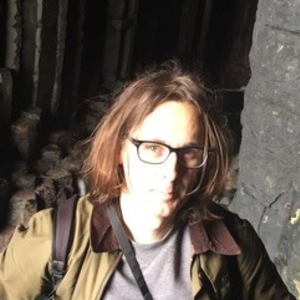 Veterinary parasitology, microscopy, printmaking, with my daughter when not @lab
Follow