Anatomy of a Toxin Pore

Structural transitions of the Clostridioides difficile binary toxin from pre-pore to pore, determined by cryo-EM.

The bacterium Clostridioides* difficile (C. diff) has been called many things: a superbug, a public health menace, an urgent concern, a notable threat. C. diff infection (CDI) is frequently nosocomial and results from major disruption of the gut’s normal flora- a state often induced through antibiotic usage. Public health officials have also noticed a rise in community-acquired CDI in recent years. Although the major virulence factors of CDI are toxin A (TcdA) and toxin B (TcdB), a third toxin, C. difficile transferase (CDT), has risen in prominence, as its presence during infection has been associated with more severe forms of disease. CDT is composed of two proteins, CDTa and CDTb, and is therefore considered a binary toxin.

What began as a straightforward approach to structurally characterize CDTb led to a detailed description of CDTb pore formation, provided several clues toward a mechanistic explanation for CDT intoxication, and truly highlighted the immense potential of cryo-electron microscopy (EM). An observation that in vitro trypsinization yielded oligomerized CDTb, which could be visualized as a dimer of heptamers via negative stain EM, made CDTb an ideal candidate for cryo-EM experiments. What we initially thought was a homogenous population of CDTb particles after size exclusion chromatography and negative stain EM turned out to contain multiple species of CDTb oligomers, which could not be separated, despite our best efforts. Included within this heterogeneous group were CDTb monomers and dimers, that, due to limited available views of these smaller particles, only returned low resolution reconstructions, along with two forms of the double heptamer. Through 3D reconstructions at 3.7-3.9 A resolution, we showed that the “short” form of the double heptamer contained one heptamer in the pore state, and one in the (non-inserted) pre-pore state, while the “long” form of the double heptamer contained two very similar heptamers in an intermediary state wherein the beta-barrel is only partially formed. Thus, from a single sample, we successfully isolated three distinct states of CDTb from the transition of pre-pore to pore. A second experiment to obtain the structure of CDTb bound to its host cell receptor, LSR, did not show LSR and the CDTb D4 domain, but did reveal a fourth “pre-insertion” state of CDTb. By solving the structure of CDTb, we also identified a previously uncharacterized domain, D3’, which is capable of binding certain glycans, and is not present in the structurally related protective antigen from Bacillus anthracis anthrax toxin.

This work generated several unexpected results, some of which are highlighted above, but one of the most intriguing is that the four CDTb structural states were all observed at pH 8.0. Canonically, the transition to the pore state includes structural changes triggered by the acidic environment of the endosome. However, we have demonstrated that at least some of these extensive structural rearrangements may proceed near physiological pH. Further experiments are required to evaluate the influence of pH on pore formation and cargo translocation, but these current studies considerably enhance our understanding of CDT function and will inform future efforts to develop new CDI therapeutics.

Page header art by Eve Moll, an undergraduate in the College of Arts and Sciences at Vanderbilt University. 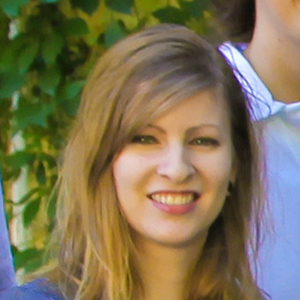