Professor Bavesh Kana of the University of the Witwatersrand in South Africa shares his experiences in working with TB. 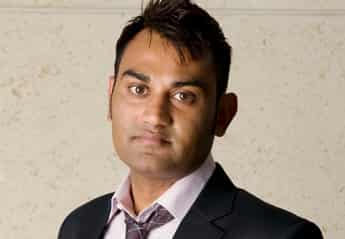 I grew up on a farm in rural South Africa and witnessed many farm workers succumb to TB infection. As a child it was hard to understand what was happening with these people and the devastating effect that TB had on their families was heartbreaking. It tore apart the entire social structure of families and communities. It was this early experience with TB that fueled a curiosity to learn more about the disease and how best to eradicate it from human society.

My laboratory has four main areas of interest:

(I) The identification and validation of novel TB drug targets, specifically in the peptidoglycan layer of the mycobacterial cell envelope. Peptidoglycan in bacteria has been the subject of successful chemotherapy for over 5 decades, but these effects have not accrued to TB, due to the inherent resistance displayed by the tubercle bacillus to conventional classes of B-lactam antibiotics. We hope to address this through studying the enzymes that remodel the peptidoglycan during growth and cell division to identify new points of vulnerability. Our work has identified an N-acetylmuramyl-L-alanine amidase as being essential for the elongation of mycobacterial cells.

(II) The quantification and characterization of diferentially culturable tubercle bacteria in the sputum of HIV-infected and uninfected TB diseased patients in South Africa. Anecdotal evidence to date suggests that sputum from TB patients, prior to the initiation of treatment, is dominated by a population of drug tolerant bacteria that are unable to grow on solid media and require the presence of exogenous growth factors to emerge. We have set up three cross-sectional and longitudinal cohorts to study this phenomenon and describe interesting correlations between the presence of these bacteria and host immunity during treatment.

(III) My laboratory has also developed a new generation of industry standards for the validation and external quality assurance of next-generation TB diagnostics, such as the GeneXpert. In 2011, the South African Department of Health passed a policy for the national rollout of GeneXpert, a novel TB molecular diagnostic. However, once installed in laboratories, there was no mechanism to assess instrument verification and continuous external quality assurance, which hampered the rollout program. To address this, we developed a production stream for non-hazardous forms of pathogenic mycobacteria, which are then spotted on cards as dried culture spots. These are used as standards for verification and quality assurance for GeneXpert. This product has now been endorsed by the World Health Organization and is now being used in over 20 countries, many of these on the African continent.

(IV) The development and validation of specialist counter-screening models for TB drug development. Drug development in TB has been plagued by the use of drug screening conditions that do not mimic the environment encountered in the host. We are in the process of developing three distinct models that generate drug tolerant organisms, which can be used to search for novel TB drugs that are active against replicating and non-replicating bacteria.

The inherent metabolic complexity in the tubercle bacillus makes for fascinating biology. M. tuberculosis has had remarkable success in the human population and has persisted as a bacterial pathogen for centuries and now holds the dubious title of being responsible for the largest number of deaths due to a single bacterial pathogen. It is a privilege to be able to work on an interesting bacterium, with important ramifications to public health.

Numerous factors that contribute to sustaining transmission of TB in endemic countries needs to be addressed. These include poor housing, rampant transmission in congregate settings, erratic access to health care services and the lack of strong national control programs that use active case finding as the basis for controlling TB. In southern Africa, co-infection with HIV has been the principle driver of TB prevalence for close to two decades. There needs to be a substantive investment in TB research and across the value chain of healthcare services. Whilst claiming close to 1.5 million lives annually, TB still remains grossly underfunded. This situation needs to be addressed through strong social advocacy and mobility in civil society.

There are many important issues that remain unaddressed in TB for example, close to one third of the world’s population is infected with latent TB infection yet, despite significant effort, we still know little about the bacterial physiology that characterizes the latent state. If we are to develop new, effective TB drugs, we need to invest in delving into the biology of the tubercle bacillus to identify key pathways that are tractable for drug development.

Michael Chao
Nature Portfolio Microbiology Community
We use cookies to help improve your experience. By continuing to browse our website you are consenting to our use of cookies.
Learn more