I reminisce about what drew me into the field and what I still find exciting about TB research. 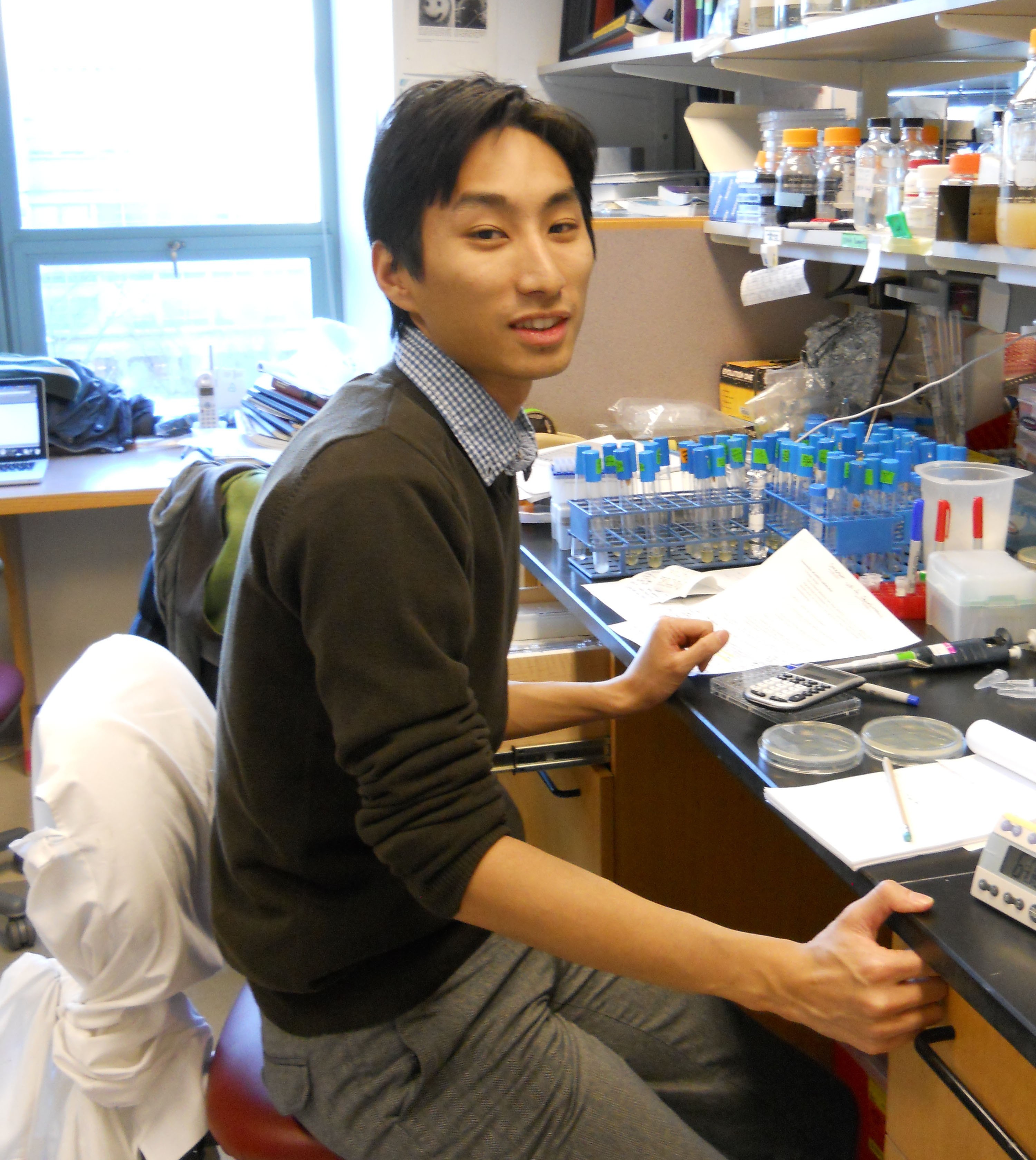 How did I come to be interested in TB and what did my work entail?

When I entered graduate school (see photo on right, circa 2010 [wow, my wardrobe was already sending me down the editing path, wasn't it?]), I wanted to work on a disease with major public health consequences. Whether that was bacterial, viral or parasitological, I had no idea. When I signed on to do a 3 month rotation in Eric Rubin's lab, I didn't know what to expect.

I worked on a project to understand the regulatory process of cell wall remodeling enzymes, an important step for understanding how we can develop new drugs against TB. But, frankly, you could study peptidoglycan remodeling in many other more tractable model organisms, so why did I stay in TB? A major selling point was the the energy and excitement of the community to be working on such an important human pathogen. It was clear that those around me wanted to make important contributions to human health and were taking really interesting and risky avenues towards achieving this. That drive and the feeling of being part of a 'movement' made all the difference and convinced me to sign the next 6 years of my life way to dissecting mycobacterial cell wall regulation.

When you join a TB lab, there's such a daunting task ahead, both logistically and intellectually. In working with an organism that grows so slowly and requires so many additional safety protocols, the pace of research is slow and uneven (you certainly grow accustomed to stewing silently when your classmates in Salmonella or Vibrio labs talk about how they used all these advanced genetics to make tons of mutants, test all of them in vivo and then have time to work out how the system worked biochemically).

And then there are the giant unknowns about even basic TB biology. LIke all researchers starting a project, you go to the E. coli or Bacillus literature, pick up the homologous pathways and try to reproduce them in TB (and in the model mycobacterium M. smegmatis), only to discover it just doesn't quite do things the same way. Yes, it has a peptigoglycan layer, but it's also got arabinogalactan and mycolic acids that also must participate in cell division but we have no integrated idea how; and yes, it does elongate into rods, but it grows without MreB (as far as we can tell) and does so from the poles (asymmetrically no less), and yes, it clearly must hijack cellular processes when it infects host cells, but what is its complement of 'effectors' to do this? At one level, this lack of analogy can be frustrating because you often end up at dead ends, but that was also the most exciting part because you really get the opportunity to define totally new biological processes you hadn't even imagined before.

What do I think is the biggest challenge today for successfully eradicating TB?

Given the alarming rise of drug-resistance in infectious disease in general, I would in principle rest my hope for full TB eradication on a good protective vaccine. The prospects of this are little less clear, especially in the foreseeable future. The BCG vaccine does have some efficacy against severe disease in children, but has much less protection capacity in adults. Understanding why this is and what changes immunologically will be key to trying to reverse engineer new approaches that can mimic antigenic responses and offer protection against (re)infection.

But I have to say, I think the choke point for eradication at the moment is infrastructure. With such a long therapy regimen (6 months on average), the ability to provide a consistent supply of medication and support staff to oversee treatment and make sure the full treatment has been faithfully completed is a huge challenge, especially in resource poor settings. The tragedy of this whole situation is most evident in the rise of multidrug resistant TB, which has spiked in recent years and can likely be traced back to noncompliance in completing a full course of drugs. Whereas once drugs could cure 100% of the time if we could only get patients to take them, we're now in a situation where some strains circulating can't be touched therapeutically even with the full attention of the clinic. While new drugs are certainly needed to combat this issue, unless we get a handle on how to deliver effective care, the cycle will only repeat itself down the line.

What would I like the public (and general microbiological audience) to appreciate about TB?

First, I'll echo that TB awareness needs to be increased. It remains the biggest infectious disease killer today and just because much of this happens in the developing world does not mean that we can ignore the issue; in fact, given globalization, the developed world will be as much under threat by MDR-TB as anyone else in the coming years.

Second, I would like to acknowledge the friendliness, fearlessness and creativity of the TB research community. I've often felt that scientists get more even more creative and collaborative when boxed in by technical hurdles, and working with TB is certainly that. Instead of wallowing or changing to more tractable systems, I found the community remains extremely open to collaborating and trying out new approaches. And while I'm no longer at the bench, I have very fond memories of my time in the lab and really do owe my development as a scientist to my interactions with the amazing TB community.

Now to sign off before I get unbearably sentimental...