Nutrition and niches of coral endosymbionts

The impacts of divergent algal-symbiont species on the physiology and nutrition of reef corals in the field are revealed by stable isotopes.

Reef corals form mutualistic symbioses with single celled algae (Symbiodiniaceae); however, climate change driven ocean warming and acidification is harming corals and disrupting this important mutualistic symbiosis in a process known as coral bleaching. Bleaching events were once rare, however, the frequency of oceanic heat waves are increasing and contributing to widespread coral bleaching events observed in four of the last six years (2014, 2015, 2016, 2019) [1]. However, Symbiodiniaceae species tolerant to bleaching stressors - such as high temperature and high light -  can confer bleaching resistance to corals [2], although this may come at an energetic cost. For example, some Durusdinium symbiont species provide less nutrients to its coral host, resulting in a reduction in the production of skeletal material than those associating with more mutualistic species, such as those in the genus Cladocopium [3].  This finding has led some to characterize members of Durusdinium as opportunists with “less mutualistic” tendencies [4]. With the exception of thermal tolerance, comparatively little is known of the effects symbiont communities have on corals in nature under non-bleaching scenarios, and central questions as to how corals may (or may not) cope with energy challenges imposed by symbiont species-specific functional diversity remain unanswered.

In our research, we wanted to better understand what impacts symbiont community composition have on coral performance and the environmental factors that partition these symbiont communities across reef habitats. One hypothesis is that corals may cope with reduction in autotrophic nutrition during bleaching or from ‘poor-mutualist’ symbionts by increasing the capture of water column food sources (i.e., heterotrophy), including suspended particulates and zooplankton.  So we asked: Do corals with poor-mutualists experience changes in physiology and nutrition compared to more mutualistic species?

To test this hypothesis, we designed an experiment where Montipora capitata corals in Kāne‘ohe Bay (O‘ahu, Hawai‘i) harboring two distinct algal symbiont communities - those dominated by Cladocopium spp. and Durusdinium sp. (Durusdinium glynnii) [hereafter, C- and D-colonies] [5] - would be collected across a light resource gradient in two seasons to evaluate host and symbiont physiological traits and nutrition using carbon stable isotopes. As an ocean enthusiast, this project combined all my favorite parts of being a marine biologist: free-diving, physiological ecology, and of course isotopes! But why stable isotopes? Isotopes are effective tools used to explore nutritional linkages in symbioses and across food webs [6]. In our case, we could use carbon isotope data to understand whether corals were receiving more photosynthetic nutrition or eating more water column materials.

Figure 2. Light is important in the distribution and physiology of corals and their symbionts. Algae symbionts (Symbiodiniaceaea) may increase cell densities and/or increase photopigmentation in response to low-light conditions. The symbiont species associated with corals may also change across environmental gradients as an effect of symbiont niche partitioning. (PC: CB Wall).

What did we find? Well, first we found that D. glynnii was consistently dominating the symbiont community in corals at shallow depths across four reef sites in both summer and winter seasons. However, D. glynnii was not completely excluded in deeper locations (3-10m). This depth-distribution further supports the tolerance of D. glynnii to high light and temperatures, but shows this species is outcompeted by Cladocopium spp. as light decreases. Our group had previously observed the transition in symbiont communities (D-dominated at surface to C-dominated at depth) to be quite compressed towards the surface (<3m) [5], which we believe is due to rapid light attenuation from high concentrations of re-suspended silt in Kāne‘ohe Bay. In this study we deployed loggers to see exactly how dark it was at depth, and the light levels at 7m in Kāne‘ohe Bay are equivalent to those at 20-40 m in parts of the Caribbean [7]! We're talking borderline mesophotic conditions! Similar transitions in coral symbiont communities elsewhere in the world are often found at ~20m [8], making this example of symbiont niche partitioning quite unique.

Exploring the physiology of these holobionts (hosts + symbionts), we found a greater capacity for Cladocopium spp. to photoacclimate to low-light by modifying the concentration of photosynthetic pigments in its cells. Conversely, D-dominated colonies, which showed less photoacclimation potential, had 50% higher symbiont densities than C-dominated colonies. Excessive symbiont densities can increase the respiratory costs of corals and reduce net benefits of photosynthesis to the coral host, while also increasing sensitivity to environmental stress [9]. We hypothesize in the paper this greater symbiont density in D-dominated colonies may originate in symbiont effects on nitrogen cycling, whereby reduced carbon delivered to the host increases host-derived nitrogen availability leading to increased symbiont growth [10].

Our findings on stable isotopes illuminated for the first time that carbon isotope values of corals were offset according to symbiont communities, indicating lower rates of photosynthesis and translocation of fixed-carbon to the coral host in D-dominated colonies. These results indicate distinct metabolic processes between the two holobionts and are first evidence of in situ effects of symbiont communities on coral nutrition. Importantly, isotope values did not support greater heterotrophic nutrition in reduced light environments, across seasons, or in response to symbiont communities. So while D-colonies show signs of less autotrophic nutrition, corals did not appear to compensate with putative energy deficits by increasing heterotrophy.

Together our results highlight there is still much to learn about how corals and their symbionts, the factors that partition symbiont species across environmental gradients, and how functionally distinct Symbiodiniaceae species influence their coral hosts. It is interesting to consider, however, that while M. capitata shows signs of greater costs due to harboring D. glynnii, M. capitata is ecologically successful and is a dominant coral within Kāne‘ohe Bay - a region that has a history of human-impacts and thermal perturbations. Therefore, M. capitata forming symbioses with divergent symbiont communities may support the persistence of this species and a “bet-hedging” of costs associated with less-mutualistic symbionts and increased frequencies of bleaching events in the Anthropocene. 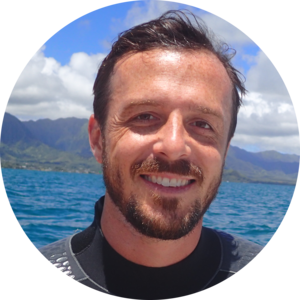