NEMATODES FOR GOOD AND FOR EVIL

Understanding the mechanism of tissue navigation provides an opportunity to exploit ‘safe’ nematodes, which, for example, could be used as biocarriers. It also, however, heralds a presence of unrecognized danger.

Ancestral anatomical features shared by all nematodes allow them to move within the mud, sand, or collagenous tissue. Understanding the mechanism of tissue navigation provides an opportunity to exploit ‘safe’ nematodes, which, for example, could be used as biocarriers. It also, however, heralds a presence of unrecognized danger.

Six months after the release of our paper (1) describing the universal mechanism of nematode migration within mammalian tissues, we present a proof-of-concept article where filaria larvae were used to induce cellular immunity against a non-filarial antigen that was chemically linked to the parasite cuticle (2).

Our first publication dealt with a never resolved problem, how nematode parasites find their way within mammal tissue (3) . It felt astonishing that without any navigation system, infective filariae but also non-parasitic soil-derived nematodes could escape from the skin through lymphatic vessels to distinct but specific locations within an animal body. This universal behavioral principle can resonate beyond the field of parasitology. For example, possession of intrinsic ability to escape the skin implies that any nematode, no matter how and where it lives, is intrinsically equipped with know-how sufficient to become an animal parasite. The versatility and simplicity of that adaptation also explain why parasitic nematodes are mostly promiscuous when selecting their hosts.

Worm as a tool

As long as nematode parasites are alive, they tend to be invisible to the immune system. Not quite, as nematode infections decrease the risk of allergies and autoimmune diseases. This observation led to the unconventional application of nematodes, where controlled infections with parasitic worms are used to milden the symptoms of certain immune-related disorders, such as Crohn disease.

Our approach goes a step further, that is, we exploit the biology of filaria nematodes to gain specific immunological effect out of bioengineered filaria worms. What led us to this unusual idea? Firstly, infective larvae of lymphatic filaria are naturally destined to target and enter the lymphatic system, where induction of immunity is the strongest. Secondly, dying worms are a source of intrinsic adjuvants, that is, factors that stimulate immune responses against the antigen co-released by worms. Further, filariae nematodes harbor intracellular bacteria symbiont from the Rickettsia group, and similar to bacterial pathogens (but in contrast to mammals) filariae do not methylate their CpG DNA sequences. Intrinsic filarial adjuvants and attached antigens are leaked from a dying worm, the process that is additionally delayed by the unusual composition of their digestion-resistant cuticle. The gradual and simultaneous release of intrinsic adjuvants and antigens within the lymph nodes further intensifies the immunological response. These features make a prescription for a natural vaccine, where a low amount of selected antigen attached to the cuticle of live but attenuated worm can lead to a stimulation of cellular immune responses. It is worth noting that intracellular Wolbachia bacteria and the unmethylated genomic DNA of the worm can stimulate Th1-type, cellular immunity, the adaptive immune response that protects, for example, against viral infections, mycobacterial tuberculosis, or growth of neoplastic tumoral cells. In contrast, most clinically used vaccines induce Th2-type, humoral immunity, which is ineffective in combating a disease that develops within cells.

As lymphatic vessels are the only route of skin escape that is used by parasitic nematodes, it is possible to select ‘safe’ nematodes, worm that could dissiminate to systemic blood circulation. This could widen therapeutic applications of nematodes, currently limited to intestinal parasites and treatment of aberrant immunological diseases. Further, nematodes that host intracellular Wolbachia bacteria can serve as antigen carriers in anti-tumoral or anti-viral vaccines

It is, however, possible that one decides to select nematodes according to different criteria, that is, search for worms that not only enter lymphatics but are also capable of escaping the ‘cleaning station’ of lung blood circulation and spread throughout the body. Such nematodes are particularly dangerous once they enter the brain. For example, highlyvirulent but otherwise non-infectious bacteria-eating nematode H. gingivalis causes delayed in onset but invariably lethal meningoencephalitic infection. In other words, once H. gingivalis reaches the brain, it thrives there feeding onneural tissue, undisturbed by the ineffective immune system. With no diagnosis or known therapy, infection with H. gingivalis and likely other morphologically similar worms will remain undetectable and lethal. For that reason, our papers can be read as an implied warning against an unrecognized threat to public safety. 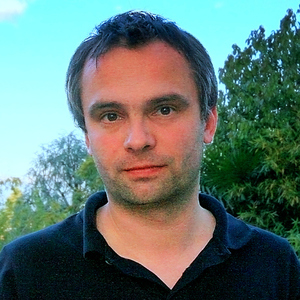 Dr. Witold (Witek) Kilarski is a Research Assistant Professor at the Institute for Molecular Engineering at the University of Chicago. His current interest split between the use of nematode parasites as lymph node targeting antigen biocarriers and the control of lymph thrombosis for the acceptance of subcutaneously grafted pancreatic islets in diabetic mice. Trained as a molecular biologist, Witold graduated from the Kracow Jagiellonian University and continued his education at the Lena Claesson-Welsh and Par Gerwins Vascular Biology group at Uppsala University where his Ph.D. work culminated in the discovery of a non-developmental mechanism of a blood vessel growth. During his first postdoc in the Angiogenesis lab of Andreas Bikfalvi of the University of Bordeaux, Witek initiated the metabolomic and proteomic analysis of chicken embryo. Once he joined the group of Melody Swartz at the EPFL, he specialized in intravital imaging of microscopic interactions that take place at the interface of basement membranes of vessels in homeostasis and pathology. His work has been published in Nature Medicine, Biomaterials, Science, Circulation Research, Nature Cell Biology, and Nature Communications.
Follow