Awakening of the sleeping σ factor by threonine phosphorylation

Bacteria often encounter various kinds of changes to their milieu and stresses within their environments. In order to survive these conditions, they usually respond by adapting their gene expression accordingly. The output or the response in these cases is often specific, in that it is tailored to the input cue (or the stress) under question. Transcriptional regulation is often one of the biggest means of achieving said gene regulation.

Initiation of transcription in bacteria only occurs upon the binding of a key component known as the sigma factor (σ factor) to the RNA polymerase (RNAP) core enzyme in order to form the holozyme. This holozyme then recognizes key promoter elements and subsequently, enables transcription. During external stress conditions, the primary σ factor is replaced by an alternative σ factor, which differs from the former with respect to the promoter sequences that it recognizes. Upon association of this alternative σ factor with the RNAP core enzyme in formation of the holozyme, transcription of the corresponding stress-response genes occurs. Among the various classes of alternative σ factors, the most abundant are the extracytoplasmic function (ECF) σ factors. Sigma factors are intrinsically active and as such have to be kept in an inactive state until their action is warranted. There are several mechanisms through which the activity of σ factors are regulated, however, generally alternative σ factors are retained in an inactive state by sequestration into a complex with an anti-σ factor. Then, only upon a specific stimulus is the inhibitory effect of the anti-σ factor alleviated and the σ factor released for interaction with the RNA polymerase.

Awakening of the sleeping σ factor by phosphorylation

In collaboration with researchers from SYNMIKRO in Marburg, we discovered a novel mechanism of transcriptional regulation, which instead relies on intrinsically inactive σ factors that are unable to bind the RNAP core enzyme. Only upon phosphorylation on a specific residue is the σ factor activated and able to bind the RNAP in formation of the holoenzyme and consequently drive expression of specific genes.

During our exploration of the function of predicted serine/threonine kinases (STKs) in Vibrio parahaemolyticus, we came across an STK (now named PknT), which was encoded next to a predicted ECF σ factor (which we named EcfP). As no obvious anti-σ factor appeared to present in the genetic neighborhood, we speculated that the kinase might act as a regulator of the σ factor’s activity – particularly through phosphorylation. As such, we designed an initial experiment to test this hypothesis, using immunoprecipitation-LC/MS analysis on cells expressing EcfP fused to the affinity tag sfGFP. Strikingly, in our first experiment, we detected phosphorylation of EcfP – for the first time showing that σ factors can be phosphorylated in bacteria. We were very excited about this result and continued this line of research in order to determine the function of σ factor phosphorylation.

Particularly, we have identified an ECF σ factor / threonine-kinase pair (named EcfP / PknT) that is responsible for sensing polymyxin antibiotics stress and mediating bacterial polymyxin resistance in the human pathogen Vibrio parahaemolyticus. We could show that upon treatment of V. parahaemolyticus with polymyxin antibiotics, PknT is activated and phosphorylates the σ factor EcfP. This results in EcfP activation and expression of an essential polymyxin resistance determinant. EcfP phosphorylation occurs at a highly conserved threonine residue, Thr63, which is positioned within a divergent region linking the two structural domains of EcfP, σ2.1 and σ2.2. The intrinsic inactive state of EcfP is due to the absence of a negatively charged DAED motif in the region between σ2.1 and σ2.2, which usually mediates binding to the RNAP core enzyme. Instead the DAED motif has been replaced by non-charged amino acids, which renders EcfP inactive and unable to bind the RNAP. Strikingly, phosphorylation at residue Thr63 mimics the negative charge, usually provided by the DAED motif, and permits interaction of EcfP with RNAP in formation of the holyenzyme and the consequential expression of EcfP target genes required for polymyxin resistance.

Figure. Transcriptional regulation by σ-factor phosphorylation is a conserved mechanism in bacteria. (A) Cells ectopically expressing sfGFP-EcfP in the presence or absence of ectopic expression of PknT. Cells were analyzed on phostag-gel to assay for EcfP phosphorylation. A clear EcfP phosphorylation band (EcfP-PO4) is observed in the presence of PknT. Samples were additionally analyzed on a standard SDS gel acting as a loading control. (B) Phylogenetic tree of homologs of EcfP. Ring #1 represents ECF σ factor groups. Ring #2 and #3 depict the presence of threonine or serine residues, respectively, in the position equivalent to the phosphorylated residue Thr63 of EcfP. Ring #4 indicates the length of the region that connects σ2.1 and σ2.2 in σ factors. This region is extended in EcfP homologs and contains the phosphorylated Thr63 residue.

A conserved signaling mechanism with modular input and output cues

Importantly, our results indicate that this likely constitutes a widespread signaling mechanism in bacteria where the input and output cues are modular based on the sensing domain fused to the kinase and the promoter sequence recognized by the σ factors, respectively, while the signal transduction pathway of σ phosphorylation is conserved.

Our model organism, V. parahaemolyticus, is a severe human pathogen and the leading agent of seafood borne gastroenteritis in the world. We could show that in V. parahaemolyticus, the input that activates the kinase PknT is polymyxin antibiotic stress and that the output of the phosphorylated and activated σ factor EcfP is the expression of a gene (vpa0879) required for polymyxin resistance. Polymyxins constitute a class of antibiotics that count as a last resort to treat Gram-negative infections. As antibiotic resistance is a severe public health concern worldwide, it is very important to understand how cells sense and respond to antibiotic treatment – and, particularly, how they mediate resistance. Thus, the identification of a mechanism that regulates polymyxin resistance in V. parahaemolyticus opens up new avenues of research in fighting this and probably other important human pathogens.

Our analyses of the underpinnings of transcriptional regulation by σ factor phosphorylation, the cellular response to antibiotic treatment and how these mechanisms combined regulate antibiotic resistance in the human pathogen V. parahaemolyticus, address issues that are important for understanding regulation of gene expression and cellular adaptation throughout the bacterial kingdom. 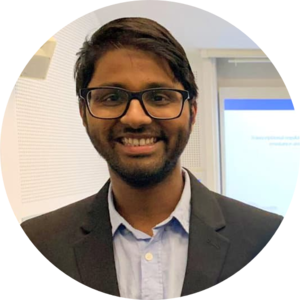