Dr Mya Breitbart of the University of South Florida, USA, shares her experiences in working in the marine sciences 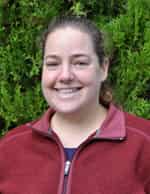 Tell me a little bit about your research.

My research strives to elucidate the diversity of viruses in the oceans, examine their spatiotemporal variability, and understand their ecological roles. Viruses infect hosts at all trophic levels, ranging from bacteria to whales, which makes them have a multitude of important effects on food web community structure and biogeochemistry. Studying viral diversity is very challenging from a methodological standpoint because they are highly diverse and there is no single marker gene that is found in all viruses (such as the 16S rRNA gene conserved in bacteria). My lab uses viral metagenomics to determine the types of viruses present in various oceanic realms, search for evidence of viral infection in many different hosts, and to discover viruses that cause disease in marine animals. We can also use these techniques for ensuring the microbial water quality of coastal waters that may be impacted by human fecal pollution.

I have loved the oceans for as long as I can remember, but I didn't get interested in microbiology until I was an undergraduate taking a required course. A standard lab exercise of identifying an unknown bacterium through a series of experiments first peaked my interest, but I really got hooked when I volunteered in a research lab and got to identify truly unknown bacteria that were cultured from Antarctic sponges yet could produce antibiotics that killed human pathogens. Following that research experience, I was introduced to the world of phage - viruses that infect bacteria - and the first time I saw a plaque (an area of clearing on an agar lawn of bacteria where the phage killed the bacteria), I knew that was what I wanted to study! Over the years, my interests have expanded to include all sorts of strange viruses (including very successful small viruses that only encode 2 genes!), studying hosts for which we didn't know any viruses (such as copepods, the most abundant animals in the oceans), sleuthing out potential pathogens responsible for disease in sea turtles and marine mammals, and developing novel ways of monitoring coastal water quality.

The most interesting thing about marine microbiology is how little we know! There is so much out there waiting to be discovered and understood. Microbes are the most numerous organisms in the oceans, where they form the base of the food chain and impact all trophic levels of life, yet they are largely a "black box" of diversity. Viruses are even more numerous and diverse, and we know even less about them! I guess it's a form of job security :-)

The oceans are facing a number of changes, such as rising temperatures, ocean acidification, overfishing, pollution and other human impacts. I think one of biggest challenges right now is understanding what the baseline is - namely, what does a healthy ocean look like and how are each of the factors (alone and in combination) changing the new steady-state. We are losing species rapidly and even relatively un-impacted areas are far from pristine.

To me, the 'Healthy Oceans, Healthy Planet' theme is all about interactions and inclusiveness. Oceans dominate the surface of our planet and we as humans are highly dependent on the sea (for a variety of ecosystem services from sustenance to recreation and tourism). We need to figure out how to protect the oceans while our species thrives. This strategy needs to consider all members of the ocean from tiny plankton up to giant whales and all members of humanity regardless of location, ethnicity, age, or socioeconomic status. We share one planet that greatly benefits from having healthy oceans - if we destroy the oceans, we will be destroying ourselves.