Hepatitis A virus was discovered almost 50 years ago, but how it enters hepatocytes and initiates infection remain a mystery. We show here that gangliosides are essential for this process and serve as endosomal receptors for this unique liver pathogen.

Viruses are obligate intracellular pathogens and must interact with host molecules on the surface of cells to gain entry and initiate replication. These interactions can trigger fusion of a viral envelope with host membranes, or they may induce rearrangements of the capsid proteins of nonenveloped viruses, either way resulting in release of the viral genome into the cytoplasm. The presence or absence of these host molecules (‘receptors’) determines which cell types can be infected by a virus. For example, poliovirus can only infect cells expressing the human CD155 molecule on their surface1. Knowing the receptor for a virus not only helps us understand how the virus enters cells, but also opens up opportunities to design antivirals that block the interaction of a virus with its receptor.

Among the five known hepatitis viruses that cause acute or chronic liver disease in humans, receptors have been identified for hepatitis C virus2 and, more recently, hepatitis B virus3. For hepatoviruses like hepatitis A virus (HAV), the identity of the receptor has remained elusive. Outside cells, this unusual member of the Picornaviridae family exists both as nonenveloped ‘naked’ virions (nHAV), comprised of a protein shell (capsid) surrounding an RNA genome, and ‘quasi-enveloped’ virions (eHAV), in which the capsids (containing the genome) are cloaked in host cell membranes4. In humans, eHAV is released from infected hepatocytes in exosome-like vesicles that circulate in the blood, and shed as nHAV particles in the feces4. Both virus types are infectious. Being cloaked with host-derived membranes gives eHAV an advantage in evading antibody responses, while the nHAV particles are extraordinarily stable and spread readily in the environment. TIM1 was reported many years ago to be a receptor for HAV – the gene that encodes this protein even bears the official name ‘HAV cellular receptor 1’ (HAVCR1)4. Recent studies, however, show TIM1 has only a limited role in hepatovirus entry, binding phosphatidylserine on the surface of the eHAV membrane to facilitate its endocytosis5,6 (Figure 1).

To identify candidate receptor(s), we designed an unbiased genome-wide screen. We knocked out ~20,000 genes in HeLa cells using CRISPR-Cas9 gene editing, and asked which knockouts prevented HAV infection. We found that guide RNAs targeting a particular set of genes (UGCG, ST3GAL5, SLC35A1, GNE and CMAS) were highly enriched in infection-resistant cells, indicating that these genes are essential for infection. Interestingly, these genes encode enzymes or transporters that mediate the synthesis of gangliosides.

Gangliosides are glycosphingolipids comprised of a sugar head group and fatty acyl tail with one or more sialic acid molecules conjugated to the head group. The first step in their synthesis, the conjugation of UDP-glucose to ceramide, is catalyzed by ceramide glucosyltransferase, which is encoded by UGCG, the lead hit in our screen. Ablating ganglioside synthesis by knocking out UGCG or treating liver-derived cells with a chemical inhibitor of ceramide glucosyltransferase (miglustat), prevented both eHAV and nHAV infection. By contrast, we found synthetic HAV RNA replicated well when transfected into the cells, suggesting that gangliosides are required for entry of the virus into cells, but not for replication of its genome. 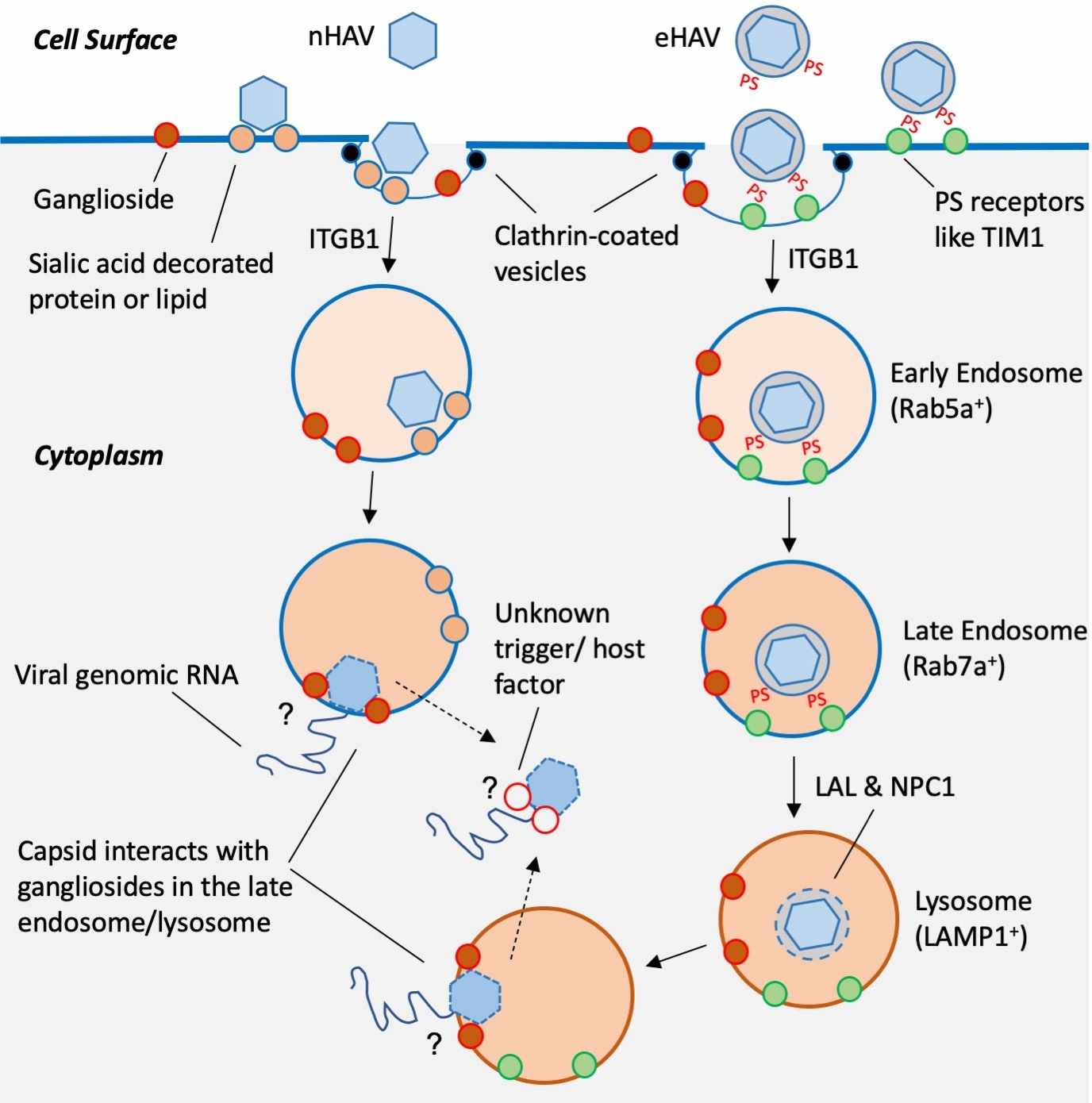 Figure 1. Current model for cellular entry of naked HAV (nHAV) and quasi-enveloped HAV (eHAV). On the cell surface, sialic acid-decorated proteins and lipids bind to nHAV, whereas phosphatidylserine (PS) on the eHAV membrane promote its binding to phosphatidylserine receptors like TIM1. Both nHAV and eHAV undergo endocytosis in clathrin-coated vesicles facilitated by Integrin beta-1 (ITGB1), which then fuse into Rab5a-positive early endosomes. As the early endosomes transition into more acidic Rab7a-positive late endosomes, the nHAV capsid binds to gangliosides leading to uncoating and transfer of genomic RNA across the endolysosmal membrane into the cytoplasm through an unknown mechanism. eHAV traffics further into LAMP1-positive endolysosomes, where enzymes like lysosomal acid lipase (LAL) and the Neimann-Pick C1 (NPC1) cholesterol transporter mediate degradation of the eHAV membrane. This exposes the capsid within the acidic environment of the endolysosome where gangliosides can bind and facilitate uncoating, presumably via a similar mechanism. In an alternate scenario (indicated by dotted arrows), the nHAV and eHAV capsid may traverse the endolysosomal-membrane intact and then interact with an unknown trigger in the cytoplasm to initiate uncoating.

Our subsequent experiments revealed that both nHAV and eHAV were taken up into cells by endocytosis in the absence of gangliosides, but both accumulated in lysosomes and failed to initiate replication. Importantly, adding back gangliosides allowed viruses that had accumulated in lysosomes to proceed through the entry pathway, eventually releasing their genomes into the cytoplasm where they could replicate (Figure 1). The disialogangliosides GD3 and GD1a were most active in rescuing infection. This suggests that gangliosides are essential for a late step in the entry of HAV into cells. They function as true receptors, interacting with the viral capsid within the acidic environment of late endolysosomes (Figure 1). GD1a appears to be most active in binding the capsid, probably because the distribution of the two sialic acid moieties on its head group enhances electrostatic interactions with the viral capsid.

The identification of endosomal gangliosides as essential receptors for HAV adds an interesting twist to the hepatovirus story. Unlike proteins, gangliosides are structurally similar in all mammalian species, which might explain the apparent ease of cross-species transmission of ancestral hepatoviruses7. However, our recent studies leave unresolved the key question of how the RNA genome gets transferred from the capsid within the lysosome across the endolysosome membrane to the cytoplasm (Figure 1). Does the capsid uncoat (break down) within the endolysosome, like other picornaviruses do in the endosomes? If so, what triggers this? Surprisingly, the HAV capsid is most stable at the low pH of lysosomes8, and our work shows that neither acidic pH nor the binding of gangliosides triggers uncoating. Also, we have found this late phase of the entry process does not require the phospholipase, PLA2G16, which is an essential entry factor for many other picornaviruses9,10. Could it be that the HAV capsid somehow traverses the membrane intact, and then meets its trigger for uncoating within the cytoplasm (Figure 1)? Considering, how different HAV is from other members of the Picornaviridae family in its requirement of host factors, many key aspects of its cellular entry still remain unanswered. 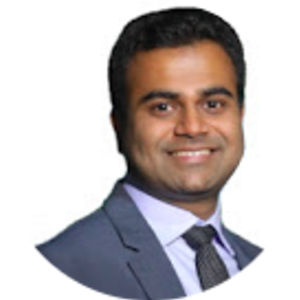