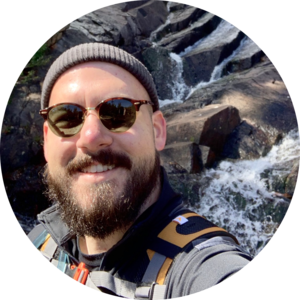 In response to host-mediated nutritional starvation, obligate intracellular bacteria of the phylum Chlamydiae enter a developmentally-arrested but viable growth state termed “persistence” (Figure 1) (Wyrick, 2010). They accomplish this in the absence of well-characterized global stress response regulators such as those that constitute the stringent response pathway in other bacteria. It has therefore remained unclear the degree to which Chlamydia are able to integrate transcriptional stress responses to adapt to various stress conditions. In our recent paper, we describe one possible mechanism that may facilitate a conserved stress response mechanism when Chlamydia trachomatis is deprived of the essential nutrients iron or tryptophan. 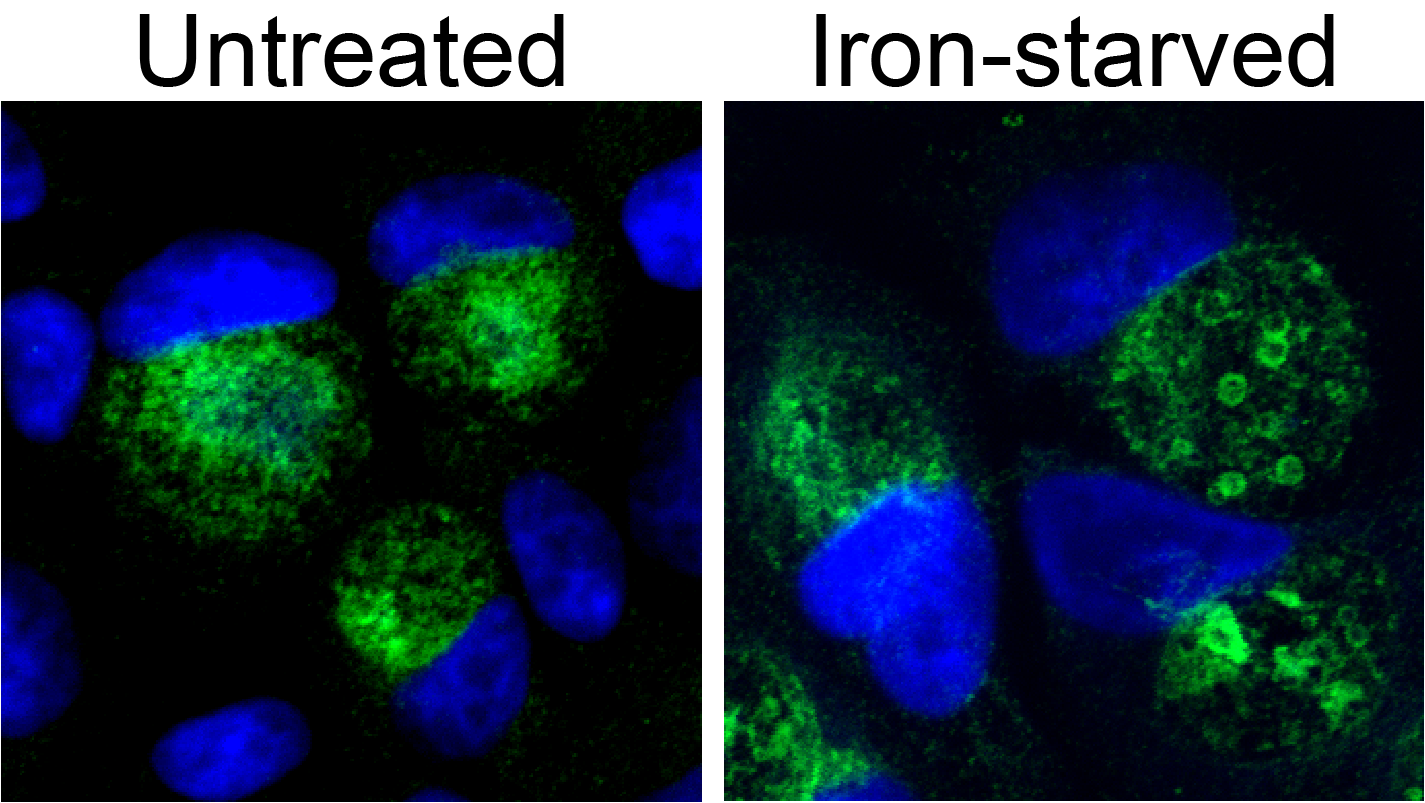 We previously demonstrated that apart from being regulated by tryptophan through the activity of the trp operon repressor TrpR, trpBA are also regulated by iron availability through the repressor activity of the chlamydial iron-dependent transcription factor, YtgR (Brinkworth et al., 2018; Pokorzynski et al., 2019). We reasoned that this was an adaptive regulatory mechanism that allowed C. trachomatis to sense the lack of iron in the LGT such that it could successfully salvage tryptophan from available indole. However, this posed an important question: How does C. trachomatis overcome iron-dependent repression of trpBA to maintain tryptophan-dependent regulation?

YtgR is unique in that it is encoded as the C-terminal domain of a divalent cation permease, YtgC, from which it must be cleaved during infection to act as a transcription factor. This also implies that the successful translation of YtgC is a prerequisite for YtgR expression and thus its regulatory activity. We observed that YtgC has a motif of three sequential tryptophan codons (WWW), resembling the characteristic WW motif in TrpL, the classic tryptophan-dependent cis-attenuator of bacterial trp operons. Therefore, we hypothesized that this motif may act to sensitize YtgR expression to the availability of tryptophan. We have now shown that the WWW motif regulates YtgR expression at both the level of transcription and translation. This leads to the up-regulation of trpBA transcription from the YtgR-regulated promoter element for trpBA. We propose that YtgR may exemplify a new class of trp operon transcription attenuators in bacteria that signal through a trans-acting transcription factor as opposed to the secondary structure of the nascent RNA of the trp operon (Figure 2). Additionally, we suspect that this may offer Chlamydia a possible means to integrate its transcriptional stress response to iron and tryptophan limitation, two stressors that induce persistence in vitro. The last transcription attenuator mechanism, TRAP in B. subtilis, was first described over 25 years ago. YtgR thus presents an intriguing update on this classic mechanism of transcription regulation. Click here for the full description of our results. 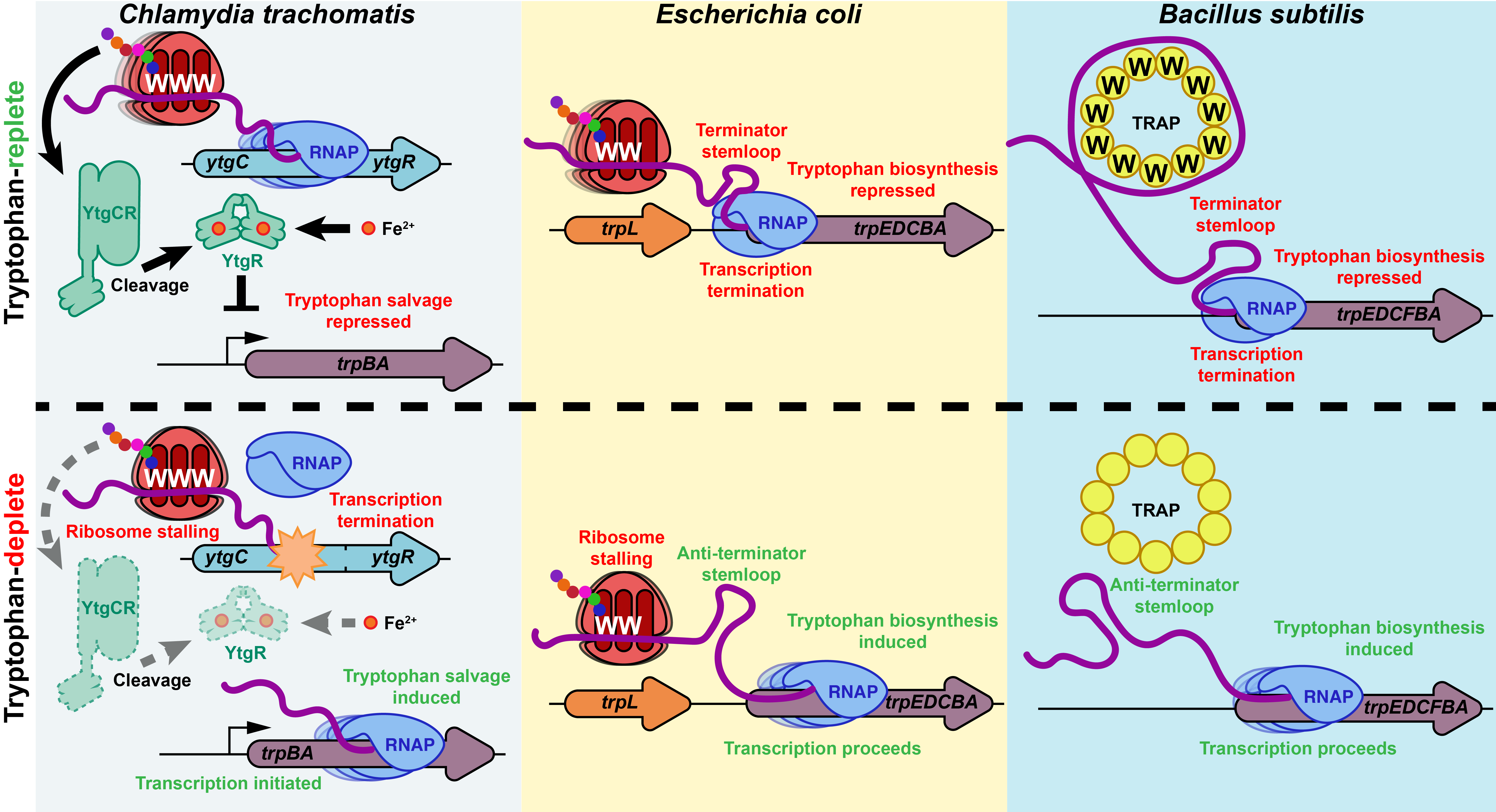 Figure 2: Comparison of the YtgR-mediated attenuation mechanism in C. trachomatis with previously identified attenuation mechanisms in E. coli and B. subtilis. The data from our paper support a model where ribosomal stalling at the WWW motif in YtgCR reduces the level of YtgR expression such that trpBA transcription is de-repressed at the YtgR-regulated promoter element. In contrast, the TrpL-mediated cis-attenuation of the E. coli trp operon links ribosomal stalling at the WW motif of TrpL to transcription of the downstream biosynthetic genes through the formation of secondary structure in the nascent RNA that leads to the formation of terminator or anti-terminator stem loops (Oxender et al., 1979; Zurawski et al., 1978). Similarly, the trans-acting multimeric TRAP protein in B. subtilis binds the nascent trp operon RNA at (G/U)AG repeats in the presence of tryptophan (W) to induce a terminator stemloop structure that prevents transcription of the biosynthetic trp operon genes (Gollnick et al., 1990; Otridge and Gollnick, 1993). Thus, whereas previously characterized attenuation mechanisms rely on RNA secondary structure to regulate transcription, YtgR-mediated attenuation is unique in that it depends on the repressor activity of YtgR to transduce the signal of tryptophan starvation to the regulation of trpBA transcription.