The native state of many microbes is in large structured communities called biofilms. While biofilms play key roles in colonisation, chronic infections, biofouling, and ecology, the spatial organisation of bacteria in large biofilms remains largely unknown. This is due to an inherent technology gap in optical imaging, where the typical means of studying biofilms (widefield epifluorescence or confocal microscopy) cannot adequately resolve individual bacteria over multiple scales. This has meant that the inner-workings and architecture of biofilms have remained a mystery.

Our recent work (https://www.nature.com/articles/s41396-020-0700-9) has focused on Escherichia coli colony biofilms which were studied using a new method of optical mesoscopy. Using a recently developed optical mesoscope (the Mesolens), we visualised the internal architecture of bacterial communities like never before and observed complex channel networks that permeate the biofilm.

The experimental design for this study began, as many do, in the pub. Following the application of the Mesolens to developmental and mammalian cell biology, we were keen to explore its potential for microbiology. The instinctive specimen? A colony biofilm which every microbiologist would be familiar with. Our initial hypothesis was based on in silico modelling which suggested there was no evident internal structure. We expected to find a mass of homogeneously distributed cells in a polymeric matrix. This wasn’t the case. Instead, we visualised striking jagged fractal-like patterns carved through the biofilm. Moreover, not only could we observe the channels which pervaded the biofilm, but using the Mesolens meant we could simultaneously resolve every bacterial cell in the biofilm over a 108 mm3 imaging volume.

We then turned to literature and were surprised. We couldn’t find any description of intra-colony channels. The closest was either the macroscopic water channels of mushroom-shaped biofilms or the folds formed in Pseudomonas and Bacillus spp. macro-colonies, which were several orders of magnitude greater in size than our channels. There were also visual similarities between sectored populations in multi-strain biofilms. However, it is important to note that our observations were all in single strain populations, where the strain-to-strain interactions necessary for sectoring to occur are not present.

We used a range of microscopical methods and staining procedures to determine what the intra-colony channels were made of, how they formed, and what their function was. These experiments were designed with recommendations in mind from experts in the field who we had met at conferences and meetings, which were incredibly valuable.

One such example was after meeting Dr Kathryn Wright (James Hutton Institute, UK) at Frontiers in BioImaging, 2018. We started to contemplate the use of fluorescent biosensors to monitor sugar transport in bacterial communities before Dr Wright directed us to Dr Nicola Holden (James Hutton Institute, UK). Our new friends at the James Hutton Institute had already constructed a fluorescent arabinose biosensor, which was perfect to test our nutrient acquisition hypothesis. Following several weeks of optimisation, we had the first indications that the channels were being used to transport nutrients towards the centre of the biofilm.

So, where does this leave us? We have now shown that microbial assemblages have intricate transport networks that contribute to the growth and viability of the biofilm, but several unanswered questions remain. We now concentrate on the formation of these structures and how they can be used to lower the burden of biofilms on society. Perhaps we have found a “secret door” into the biofilm, one which could be exploited to modify clearance strategies? This requires further study but puts forward an exciting prospect for microbial community biology and providing better means of biofilm eradication.

How methane is produced in mangrove ecosystems?

Fungal Sax – Breaking down the spice 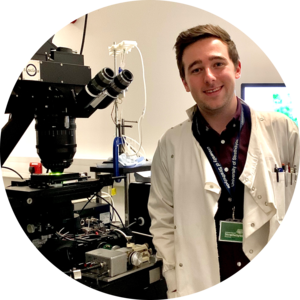 Liam is a PDRA at Heriot-Watt University (Edinburgh, UK) currently investigating the mechanisms which underpin bacterial Type VI secretion system-mediated interactions towards fungi. His research uses cutting edge super-resolution and single-molecule localisation microscopy methods to study the mode of action and fate of fungal-specific effectors. Before this, Liam obtained his PhD from the University of Strathclyde (Glasgow, UK) where he developed and applied several advanced optical microscopy methods to different aspects of microbiology including cell motility, biofilm formation and mimetic culture environments. Liam is also an active member of the Microbiology Society and a Fellow of the Royal Microscopical Society, where he chairs the Early Career Committee and sits on the Life Science Section Committee.
Follow