Step into your favorite forest and pause for a moment before your favorite tree. Chances are, it’s home to a diversity of symbionts that so often escape our notice: a wealth of fungi that improve access to soil nutrients, protect against stress, and shape the responses of trees to natural enemies. These plant-fungal partnerships represent a long and important history that has its origins in the earliest colonization of land. Over time these associations have diversified, with extant plant-fungal symbioses spanning a wide range of association types and a tremendous diversity of fungal species1. Today, massive pressures of climate change – rapid warming, drying, and resultant stresses from pathogens, insects, and fire – are playing out in mortality of forest trees worldwide2. What is the fate of the fungi on which they rely?

Figure 1. Ponderosa pine forests of southwestern North America often are separated by large areas of drier, warmer lowlands with different communities of plants and fungi. Left: View of the semi-arid lowlands below an isolated Ponderosa pine forest, Pinaleño Mountains, Arizona, USA; right: view of the Santa Teresa Mountains from the Sonoran Desert, which separates many of the forested Sky Islands in southeastern Arizona.

Across the southwestern United States, forests dominated by iconic Ponderosa pine (Pinus ponderosa) grace cooler, wetter mountaintops and plateaus that rise above a sea of deserts, grasslands, and interior chaparral3 (Fig. 1). These ‘Sky Islands’ form an archipelago of biodiversity, bridging flora and fauna in a broad arc from the Rocky Mountains to the north to the Sierra Madre to the south. In the largely arid and semi-arid state of Arizona, such isolated forests represent the driest and perhaps most tenuous edge of Ponderosa pine’s impressive range: an area in which rapid drying and warming of the climate, and associated outbreaks of pests and fire, threaten the dominant forest tree. We posited that long-term plans for forest conservation and management must consider the fungal symbionts of Ponderosa pine, including the diverse and abundant fungi that interact with leaves (foliar endophytic fungi) and roots (ectomycorrhizal fungi). However, these fungal communities had never been charted across the Sky Islands and related forests of Arizona, and the factors shaping their distributions today – and their sensitivity to change tomorrow – were not known.

As a prelude to the present work, we studied endophytes and ectomycorrhizal fungi associated with Ponderosa pine along an elevation gradient in the Santa Catalina Mountains, a Sky Island just north of Tucson, Arizona4. Our goal was to assess how these fungal symbionts are distributed with respect to temperature and precipitation. We collected root cores from mature trees and leaves from the tall canopy of Ponderosa pine (Fig. 2) along an elevation gradient of 635 m, corresponding to a difference of ca. 4°C in mean annual temperature and 15 cm of precipitation. We found that diverse endophytes and ectomycorrhizal fungi differed in their apparent sensitivity to climate. Even over a short geographic distance (<10 km), ectomycorrhizal fungi differed markedly in composition between higher and lower portions of Ponderosa pine’s local range. However, endophyte communities were homogenous across the gradient. These findings piqued our curiosity: can these important fungal symbionts of Ponderosa pine disperse across the large areas separating the Sky Islands – or are they insular and distinct within each forested island, reflecting the distinctive plant communities in the intervening lowlands? 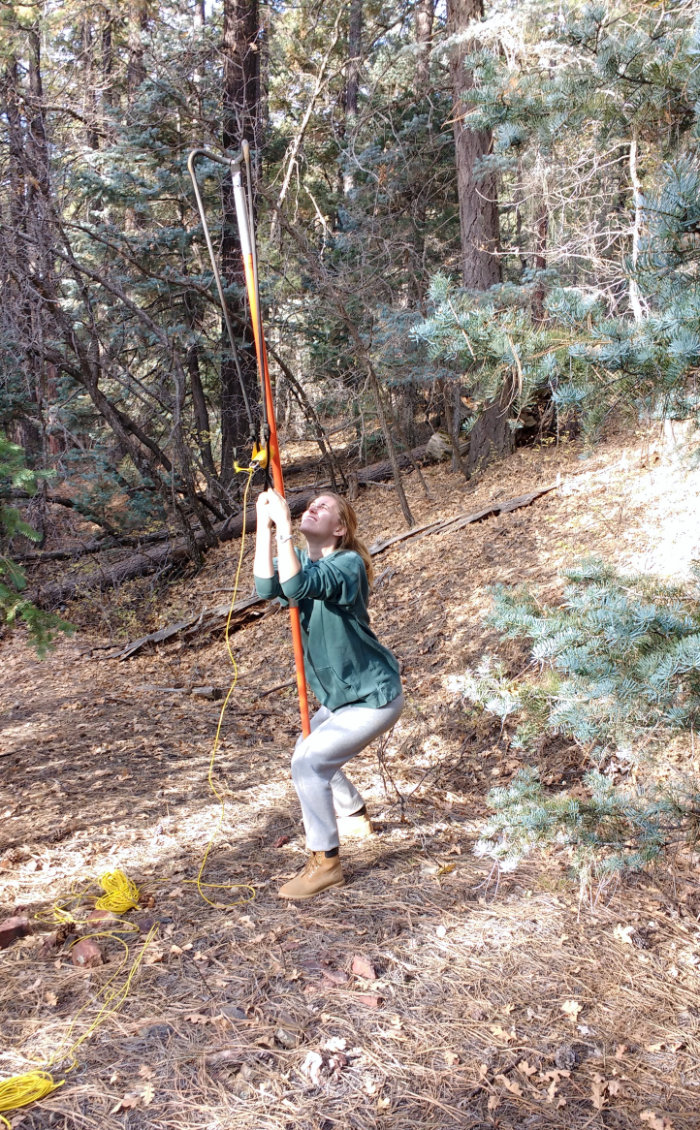 Figure 2. To access the canopy of Ponderosa pine, we had to use a tall slingshot to shoot a rope saw over branches. Here, undergraduate Sequoia Fischer is shooting the rope up into a tree.

To answer this question, we sampled roots and leaves of Ponderosa pine across more than 500 km of geographic distance in Arizona. Our sites ranged from the Hualapai Mountains at the edge of the Mojave Desert in northwestern Arizona to the Chiricahua Mountains, which rise above Chihuahuan Desert grasslands at Arizona’s border with Mexico and New Mexico (Fig. 3). 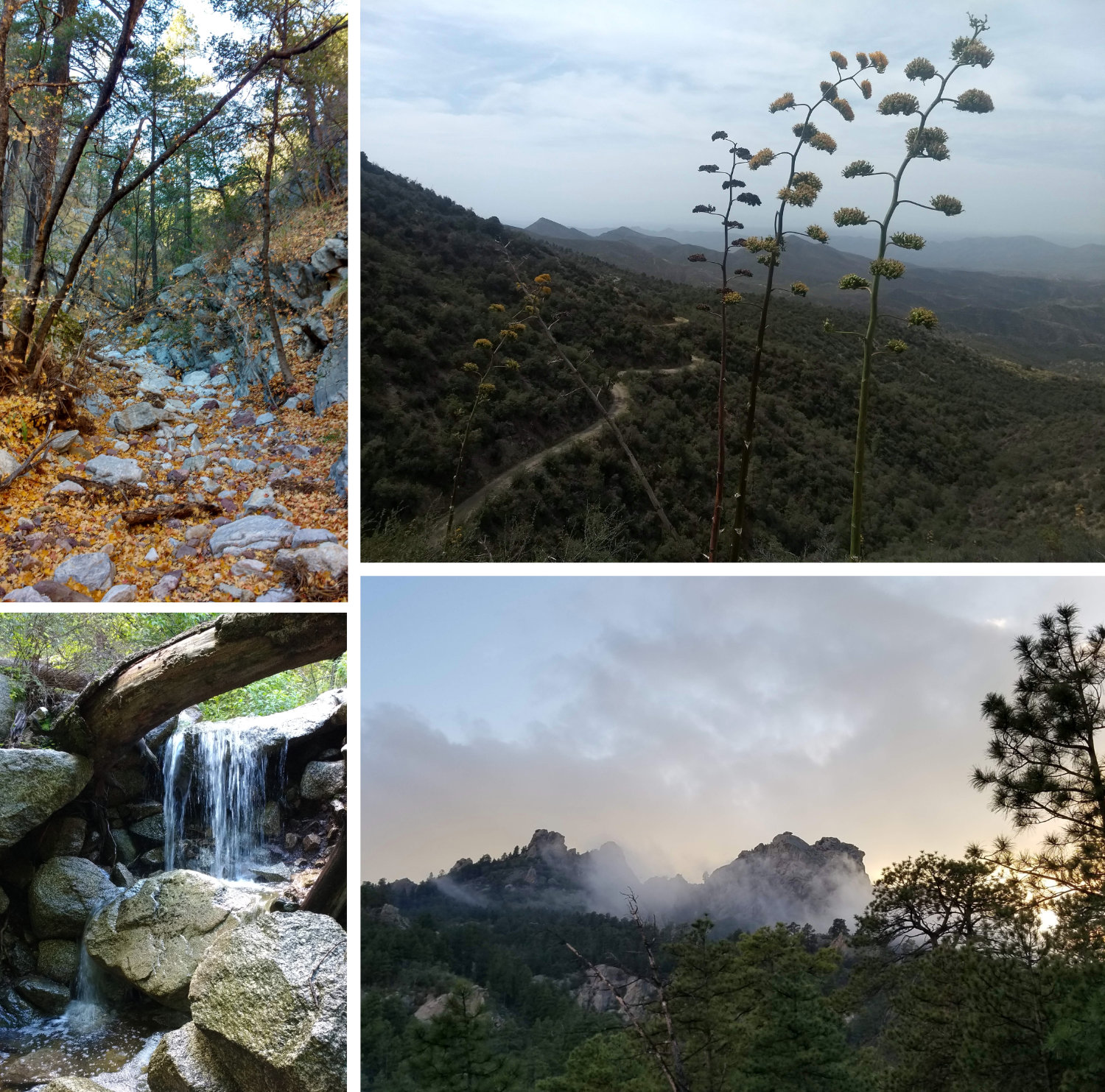 The forested highlands we surveyed were all home to mature Ponderosa pine forests, many with running springs, winter snow, and a shaded understory that contrast so markedly with the dry and warm lands below. We sampled in areas without recent impacts from wildfire, but such status is increasingly rare in these forests: since we began our work in 2016, major fires have damaged Ponderosa pine stands in most of the ranges we surveyed, with the drying and warming climate challenging forest regeneration. Other areas are facing outbreaks of bark beetles, with accelerated losses of trees expected in the exceptional drought of 2021. The norm over the past half-decade is a marked increase in Ponderosa pine mortality at the scale of hundreds of thousands of hectares5. We recognized that our sampling was important not only for understanding how to integrate fungal symbionts into conservation and regeneration plans, but also to chart the threatened biodiversity of the region.

To those ends, our surveys uncovered a tremendous diversity of symbiotic fungi, documenting over 900 species that affiliate with Ponderosa pine across the region. Yet the factors shaping leaf- and root-associated symbionts differed markedly. Communities of endophytic fungi in leaves differed as a function of environmental conditions, whereas ectomycorrhizal fungi were structured predominantly by dispersal limitation. Interestingly, each isolated forest hosted a large number of unique fungi, highlighting the conservation value and potential power of local adaptation in symbiont-host interactions.

Our results emphasize the importance of documenting and exploring the diversity of fungi in isolated forest enclaves in Arizona. The endophytes and ectomycorrhizal fungi we detected represent different species relative to those in more northern areas in which Ponderosa pine occurs, with restricted distributions that suggest massive losses of fungal species as forest islands retract or are damaged under pressures from climate change. The resulting potential for feedback loops that limit forest regeneration is strong. By understanding the diversity, distributions, and function of these fungal symbionts, we may uncover important tools for improving forest health, resilience, and re-establishment in the warmer and drier years to come – a toolkit ever more important in our rapidly changing world.

Back to ISME J

Arpita Bose
Nature Portfolio Microbiology Community
We use cookies to help improve your experience. By continuing to browse our website you are consenting to our use of cookies.
Learn more