For the first time, scientists characterized a subsurface cave off the coast of Florida. An anoxic, sulfidic bottom layer contained high levels of recently discovered microbial taxa, whose genomes shed new light on ecology and evolution in low oxygen systems.

SCUBA divers have long been drawn to marine blue holes because of their dramatic bathymetry and rich biodiversity. These unusual features formed thousands of years ago, when sea levels were much lower than they are today and weathering carved deep caves and tunnels into limestone bedrock. Some of these caves remain above sea level and have become springs and sinkholes. Others, like the famous blue hole in Belize, were filled in by ocean waters. The eastern Gulf of Mexico is dotted with blue holes that until recently were known only to local divers and fisherman. These unique features, like blue holes worldwide, have remained relatively unexplored by scientists.

Blue holes are challenging to explore due to their narrow openings and bottom depths reaching hundreds of meters. Over two expeditions, we explored the Amberjack Blue Hole off the west coast of Florida. The research involved specially trained SCUBA divers, a custom-engineered autonomous benthic lander, and the coordinated expertise of microbiologists, geochemists, hydrographers, and marine ecologists from six institutions.

We found an alien environment unique in its biology, chemistry, and hydrography. The water column is highly stratified and presumably mixes only rarely with the surrounding seawater. Oxygen is present near the rim, but drops below detection with depth, while hydrogen sulfide rises to levels comparable to those of the Black Sea. Although the rim is full of colorful sponges and lots of fish, the interior of the hole is an unwelcoming destination for curious tourists looking for a fun dive excursion.

The divers were crucial to the mission’s success. They followed highly technical protocols to avoid decompression sickness, including breathing mixtures of inert gases and taking hours-long pauses during ascent to eliminate dissolved gases from their tissues. Their job included guiding the lander to the bottom of the hole, where it sat for 24 hours to record chemical data. They also collected water samples by hand and made important sensory observations. For example, they noticed certain layers were clouded with particulates, and smelled sulfur through their regulators. On one occasion, they documented two dead sawfish, a critically endangered species, at the bottom of the hole – victims, perhaps, of disorientation and eventual suffocation.

Low oxygen environments are important natural laboratories for understanding marine biogeochemistry and microbial oceanography. We aren’t aware of any other entirely marine and apparently permanently redox stratified basins in nearshore North America. As oxygen minimum zones expand with climate change and eutrophication, anoxic microbial communities will play increasingly large roles in oceanographic processes. We found high levels of microbes belonging to newly discovered branches of the tree of life, the DPANN (Archaeal) and CPR (Bacterial) lineages. These taxa are gaining recognition as important players across a range of environments, but their ecology remains largely unknown. Our metagenomic analyses offer important clues into why they can dominate in such harsh environments, including streamlined genomes and features like pili that may help to scavenge nutrients. Interestingly, they seem to lack many genes thought to be necessary for anaerobic metabolism. Although we did not find clear evidence of symbiosis, these cells may rely on (and even physically attach to) other microbes, potentially benefitting from metabolic syntrophy.

As our sampling capabilities and analytical methods improve, we will continue to connect the dots linking genomic adaptations, biochemical function, and microbial interactions in low oxygen marine ecosystems. There are potentially strong connections between blue hole microbial processes and the macrofauna outside the hole. Perhaps one day we will even know why the sawfish met their untimely end at the bottom of Amberjack!

To learn more about the Amberjack Blue Hole project, check out the PBS Changing Seas episode about it. 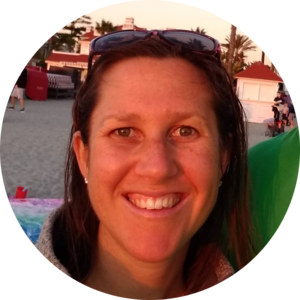