We often witness what objectively look like strange occurrences without giving them much (if any!) importance—in most cases, because we heard about them so many times that we take such observations for granted. One of them is the co-existence of two alternative glycolytic pathways in E. coli ...

+1
Victor de Lorenzo and 1 other See all
Professor of Research, CNB-CSIC
Follow 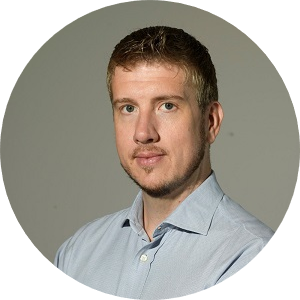 The most famous one that goes into all biochemistry textbooks is the Embden-Meyerhof-Parnas (EMP) route (Fig. 1A) that relies on the equally famous 6-phosphofructo-1-kinase (PFK) enzyme. PFK phosphorylates fructose-6-phosphate (F6P) to yield fructose-1,6-bisphosphate (FBP). In fact, this reaction determines the metabolic fate of glucose, as it poises the C6 skeleton of FBP for the action of the next enzyme (aldolase), which breaks the molecule into two trioses-phosphate—the key event of the route. The principal feature of PFK is that it catalyzes an irreversible step. Therefore, if cells ‘decide’ to go into a gluconeogenic mood, one additional enzyme (fructose-1,6-bisphosphatase) is required to revert the downwards flow of carbon otherwise imposed by the action of PFK. This basic scheme for handling glucose seems to be widely conserved throughout the evolutionary tree—from Enterobacteria to erythrocytes—and EMP is the one pathway that largely holds the trademark of glycolysis for the majority of the folk.

However… there is an alternative route for the breakdown of sugars, discovered by Nathan Entner and Michael Doudoroff, aptly named Entner-Doudoroff pathway. In this case, glucose-6-phosphate follows an entirely different biochemical itinerary, as it is oxidized to produce 6-phosphogluconate [thereby creating a link to the pentoses phosphate (PP) pathway] and then 2-keto-3-deoxy-6-phosphogluconate (KDPG). The key enzymes in this case are 6-phosphogluconate dehydratase (EDD) and KDPG aldolase (EDA, for ED aldolase). The main difference between the EMP and the ED routes lies not only in the chemical formulas of the intermediates, but also in that the balance of ATP and NAD(P)H generated per molecule of glucose is remarkably different: 2 ATP + 2 NADH in the former case and 1 ATP + 1 NADH + 1 NADPH in the latter (Fig. 1A). In other words, it would appear that the EMP route is geared towards fueling biomass build-up while the ED counterpart looks fitter for producing reductive currency.

That the two somewhat competing pathways coexist in E. coli and other related species is surprising enough. Yet, more intriguing still is the fact that PFK is largely missing in environmental bacteria, which in many cases do well with just the ED pathway. In this respect, it is a long-standing observation that most Pseudomonads and related rhizobacteria lack a functional EMP route while enjoying a full-fledged ED pathway. For decades, this state of affairs has been taken as a mere curiosity and also a taxonomic hint for classifying this type of microorganisms. This seemingly unexciting fact has eventually revealed one special biochemical feature of Pseudomonas that underlies its value as a powerful bioremediation agent and valuable platform for engineering—a sort of metabolic Ariadne's thread.

Soon after the first complete genome sequence of the archetypal Pseudomonas putida strain KT2440 became available in 2002—but before the onset of genome-scale metabolic reconstructions—Max Chavarría (by then a Ph.D. student in Madrid) charted all genes and enzymes annotated as players of sugar processing in this bacterium. He found a prime example of weird-things-under-everyone’s-nose: yet, instead of turning a blind eye, Max noticed that there was something fishy and worth investigating. Specifically, he found a complete EMP pathway that only lacked PFK but otherwise had all necessary enzymes to run the whole process. The consequence was that the route, if functional, had to run always upwards (i.e. in a gluconeogenic fashion)—not downwards. To test this, he knocked-in the PFK-encoding gene of E. coli in P. putida, only to find that cells were unable to grow on glucose as the sole carbon substrate and hyper-sensitive to oxidative stress (Fig. 1B). This was a circumstantial evidence that the EMP enzymes (other than PFK) were running their reaction ‘upwards’ in a fashion that protected P. putida against redox insults. On the basis of some further genetic and metabolomic data, we entertained that, in reality, P. putida does not host a complete ED pathway and an incomplete EMP route. Instead, these metabolic blocks are merged to form a biochemical cycle that also includes enzymes of the PP pathway for the sake of balancing biomass formation and the NAD(P)H output.

In 2012, we turned to Uwe Sauer (a leading expert in systems biology at ETH Zürich) and his long-time collaborator Tobi Fuhrer with this somewhat meagre (but still interesting) data. Uwe and Tobi were intrigued yet skeptical about the existence of such a cycle. It took 3 more years of painstaking genetic analyses, flux measurements and metabolite quantification to convince collaborators, reviewers and the community in general that P. putida indeed metabolizes glucose through a cycle formed by enzymes of the EMP, ED and PP pathways—which received the (unimaginative) name of EDEMP cycle (Fig. 1C). While generating the heaps of data to support the notion, it did not escape our notice that carbon fluxes through the cycle and its connections undergo a rapid and dramatic reconfiguration when cells faced oxidative challenges. In particular, periplasmic glucose processing is nearly entirely rerouted to cytoplasmic oxidation, and the activity of the PP pathway greatly enhanced to produce large amounts of NADPH—in what appears to be an oxidative stress-fighting mode. Again, it took yet another few more years to nail down all the overkilling evidence supporting this distinct feature of the P. putida metabolism that is now reported in Nikel et al. In sum, this bacterium adopts a sort of metabolic ‘economy-of-war’ when challenged with ROS under which the generation of anti-oxidant currency is favored over biomass production. This phenomenon seems to be a mostly biochemical response of the enzymatic network by itself, not a typical—and slow—transcriptional regulation phenomenon. 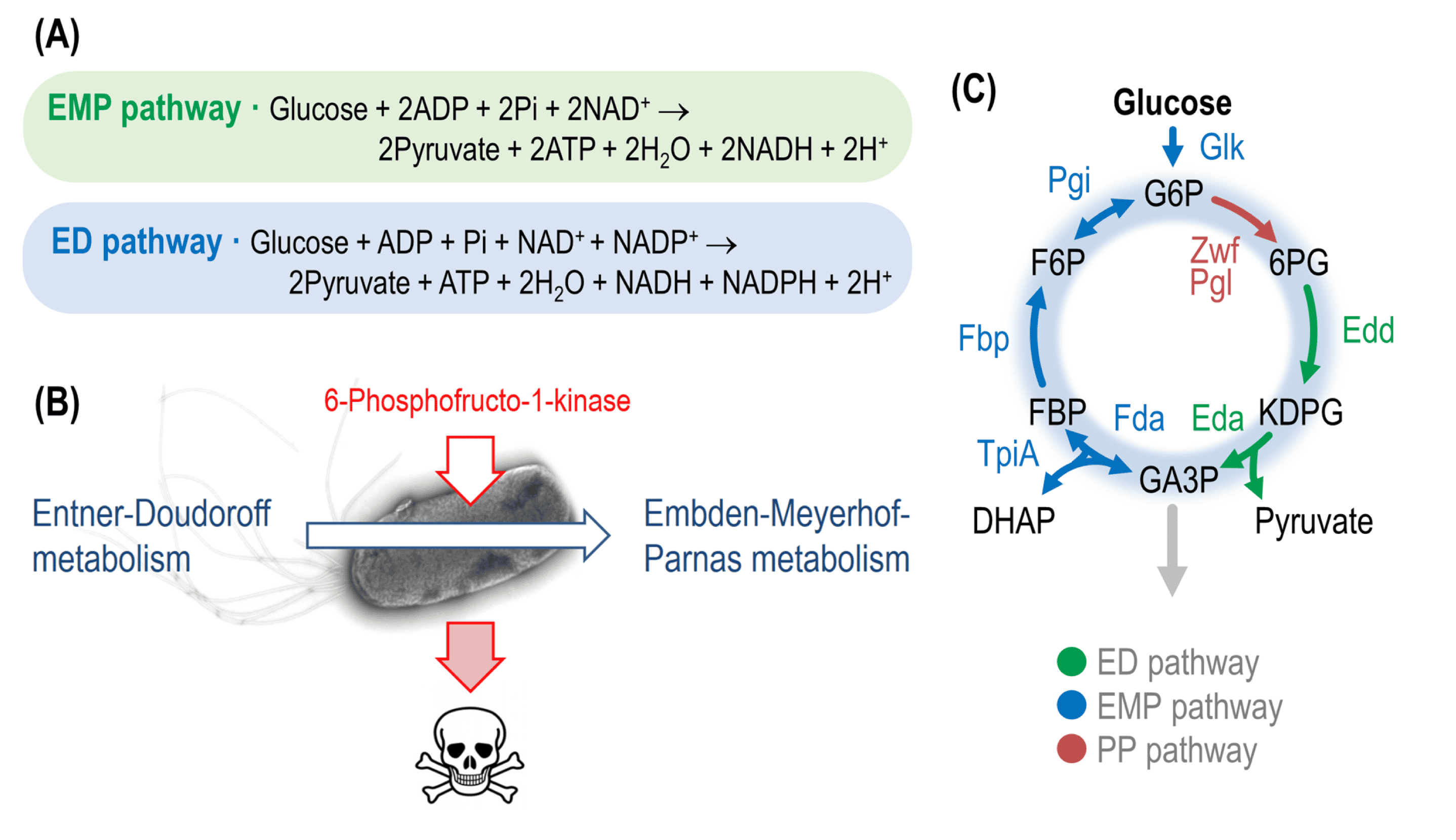 Fig. 1. (A) The Embden-Meyerhof-Parnas (EMP) and the Entner-Doudoroff (ED) pathways display a different stoichiometry in terms of energy and redox output. (B) An early attempt to switch the ED metabolism into a purely EMP-based glycolysis by knocking-in a PFK from E. coli resulted in the inability of the cells to grow on glucose and extreme sensitivity to oxidative stress. (C) The EDEMP cycle of Pseudomonas putida KT2440. Key enzymes, intermediates and their connectivities are highlighted in the diagram.

In retrospect, these observations explain why many environmental bacteria (which endure endogenous and exogenous oxidative stress in the niches they colonize) lack PFK (the starting point of this story) as this metabolic architecture enables a strong metabolic response to redox insults. By having an up-and-running EDEMP cycle, these microorganisms secure enough and quick production of ‘anti-ROS’ redox currency when (and if) necessary. This piece of information not only give us the intellectual pleasure of knowing more about an interesting bacterial species: it also paves the way to exploit these ‘built-in’ properties for the sake of engineering more efficacious bioremediation agents for environmental interventions and for exploiting P. putida as an optimal chassis for hosting harsh redox reactions of industrial interest.

A Diet-Microbe-Epithelia Metabolic Trilogue in the Stressed Gut