The Rap phosphatases of Bacillus subtilis, along with cryptic prophage activation, function as a fine-tuning mechanism that enable the quick adaptation of this bacterium to diverse environmental conditions.

Bacteria inhabiting a wide variety of ecological niches commonly establish complex communities attached to any available surface (rocks, plant roots, biological tissues, etc.). These communities, known as biofilms, are characterized by their high cell densities and the production of a protective matrix: a complex mixture of polysaccharides and proteins that envelops the cells forming part of the biofilm and shields them from environmental dangers.

Interestingly, cells within a biofilm can differentiate into discrete subpopulations that express different phenotypes, even when they are genetically identical. The consequence of this capacity is that within a biofilm some cells will contribute to produce the biofilm matrix, while others may produce degrading enzymes to provide nutrients for the population, and yet others may take care of other tasks that are necessary for the proper development and function of the biofilm. This phenomenon is important for bacteria because it allows them to display complex and coordinated social behaviour and engage in a more efficient exploitation and utilization of resources, all of which enables bacteria to persist in challenging environments. Thus, proper control of biofilm formation is of paramount importance for bacterial species.

Bacillus subtilis is a biofilm-forming sporulating bacterium that is ubiquitous in the environment and has been used intensively as a model organism to address diverse microbiological questions. The ability of this bacterium to form biofilms and create heterogeneous subpopulations is tightly controlled by three master regulators: Spo0A, related to the production of the biofilm matrix and sporulation; DegU, which controls the switch between motility and biofilm formation; and ComA, responsible for regulating competence development.

B. subtilis possesses a complex regulatory network that is responsible for fine-tuning the activity of these master regulators. An important component of this network is the family of Rap phosphatases and their associated Phr peptides. These elements function as regulatory pairs where each Rap phosphatase can inhibit the activity of at least one of the three master regulators (Spo0A, DegU or ComA), and is in turn inhibited by its cognate Phr peptide, which can function as a quorum sensing signal. The rap-phr genes are highly prevalent in B. subtilis: an average of 11 rap genes are found in any given B. subtilis strain.

The importance of the Rap-Phr regulatory elements has been investigated by diverse groups, however one problem that became apparent over time was that these phosphatases have redundant regulatory roles, e.g. a strain possessing 4-5 Rap phosphatases all controlling Spo0A would not be rare. Since most studies addressed only one or two Rap phosphatases at a time, it was hard to obtain a complete picture of their regulatory effect. Comparison of diverse studies was also complicated by the use of disparate B. subtilis strains. Nevertheless, in recent years it became clear that these phosphatases were important for ecological adaption and phenotypic control in B. subtilis. An isolate from chicken guts was shown to sporulate extremely early as compared to lab strains, with these differences being underpinned by variation in their available Rap-Phr pairs. Another study showed that a particular Rap-Phr pair was important for biofilm formation, which would have an impact on further phenotypic differentiation.

I have originally started my PhD with the aim to research quorum sensing systems and was busy creating rap-phr mutants in B. subtilis when we read the publication about how lack of two Rap-Phr pairs alter sporulation timing in the chicken gut isolate. This led us to design a truly herculean competition experiment to test the impact of all the Rap-Phr pairs in a single B. subtilis strain: we made individual knock-out mutants of all the rap-phr genes, as well as double mutants to be able to cross-examine our results. Since we expected that the impact of some pairs would be more easily observable under specific growth conditions we added 4 growth regimes to our competition. Being worried that the regulatory effect of some Rap-Phr pairs would be too small to detect in a single competition event, we capitalized upon a multi-generational element in our approach so that we could better resolve small regulatory effects. Additionally, since we planned to have all strains competing together in a free-for-all melee, we needed to add a genetic “barcode” to each strain, as it would be impossible to track all strains with traditional molecular microbiology methods such as antibiotic markers or fluorescent reporters.

Carrying out the experiment was quite a memorable experience, involving the preparation of all the required mutants, the tireless efforts of an undergrad student to barcode the strains, the enormous patience of my colleagues at my booking of almost all available incubators, and my retreat from the world to basically live in the lab for a period of 10 weeks to run the experiment and take care of all the parallel-running competing populations. And then, the nervous waiting for the sequencing results. 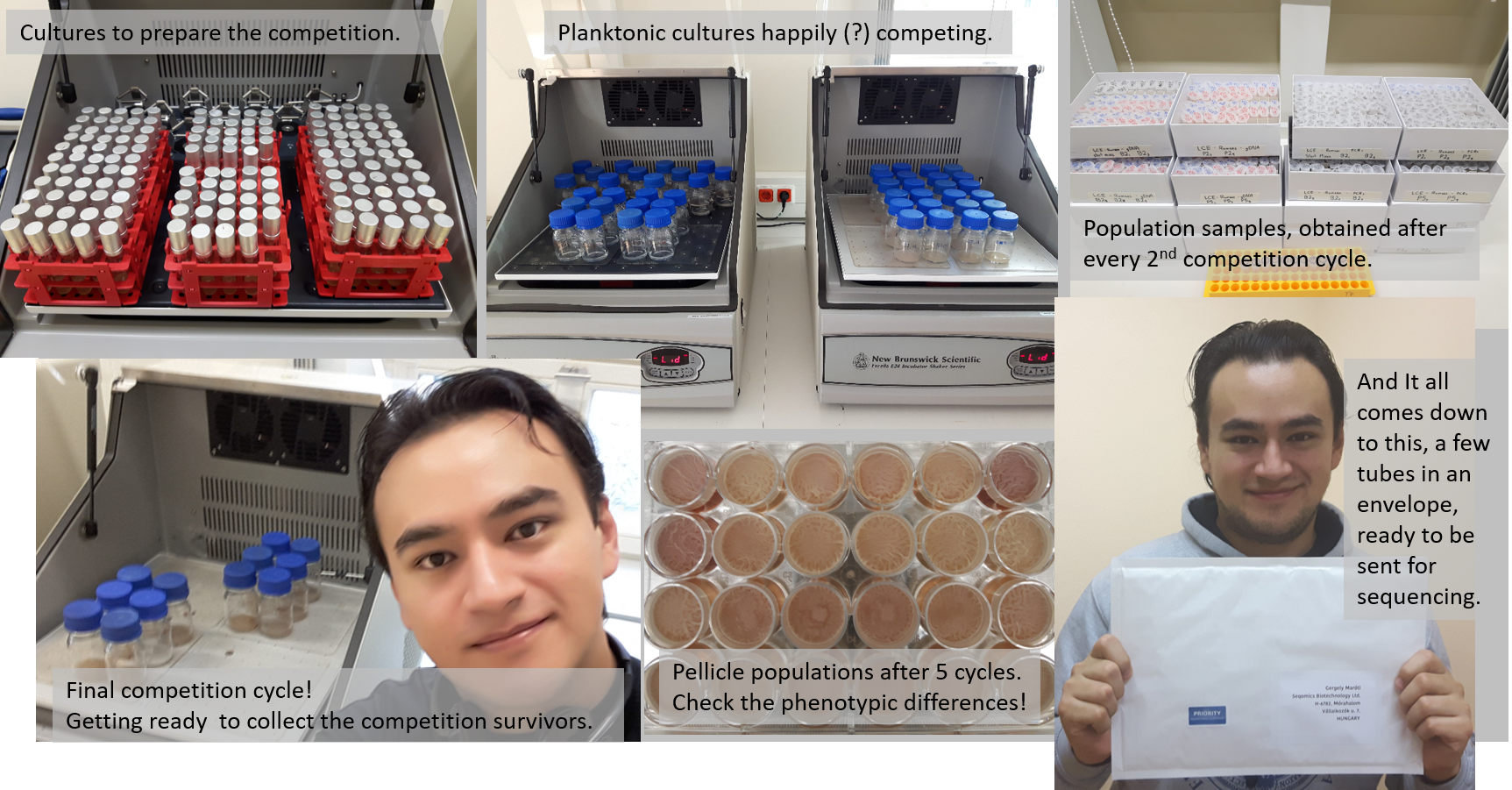 Through our analysis of the different competition populations we were able to determine the impact that each Rap-Phr pair has on the fitness of B. subtilis and its capacity to persist under the used growth regimes. We find that, although no single Rap-Phr pair is able to provide the bacterium with a fitness advantage under all tested conditions, specific Raps (or sets of them) do provide advantages or disadvantages in regards to sporulation and biofilm formation under determined growth conditions. One complicating factor in our analysis was the rise of a cryptic prophage, which also contributes to the adaptation of B. subtilis to repeated sporulation conditions.

Overall, these results allowed us to examine the role of all Rap phosphatases in a single strain of B. subtilis, and showed that the variability in Rap-Phr pairs among strains of this bacterium endow them with a flexible mechanism to adapt its population to diverse environmental conditions, likely by fine-tuning the activity of the master regulators responsible for generating phenotypically diverse subpopulations. The role and rate at which de novo mutations allow for further adaptation remains to be investigated, as well as the impact that a cryptic prophage element encoding for further Rap phosphatases may have upon activation *wink-wink*.

A colorful glimpse on a seemingly inefficient, yet highly successful viral life cycle