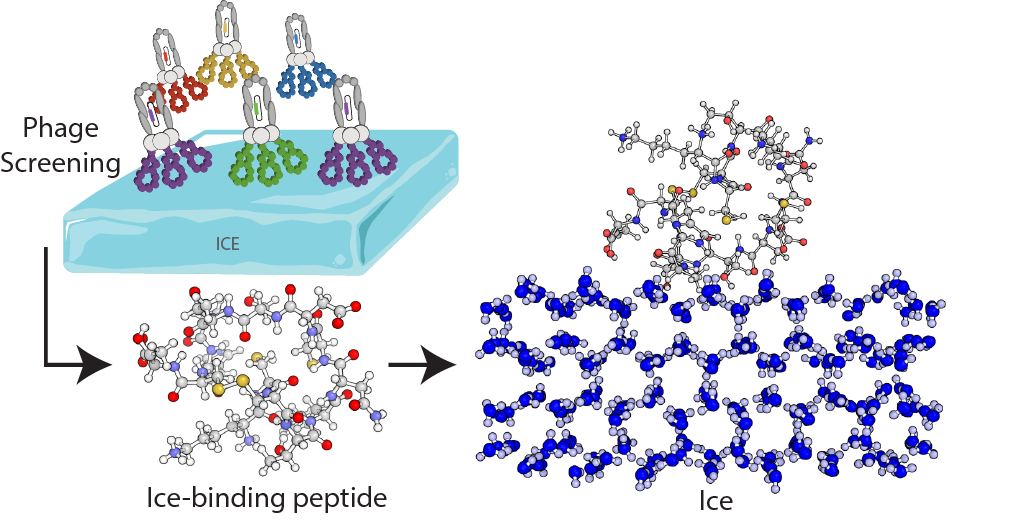 Organisms in all kingdoms of life have evolved strategies for inhabiting environments where they are routinely exposed to temperatures below zero Celsius. These organisms do not just survive, but often thrive, in these severe conditions. Some warm-blooded organisms maintain their equilibrium body temperature with shelter, or insulation such as fur or clothing, while others hibernate lowering both their body temperature and metabolic rate. Those organisms lacking the ability to regulate their body temperature have developed complex biochemical adaptations to resist or tolerate freezing. While some produce high levels of colligative antifreezes like glycerol or other polyols, others produce proteins that interact with ice. These proteins, termed ice-binding proteins (IBPs) have the remarkable ability to bind to an ice crystal and prevent its further growth. Despite 50 years of study, there remain huge questions in how IBPs (also known as antifreeze proteins) can recognize and bind ice, in the presence of a huge excess of competing water molecules. IBPs are thought to have many potential applications in tissue preservation, transgenic organisms, and anti-icing surfaces. For instance, due to a shortage of organs available for transplantation, there is a need to extend organ storage times.

It has been hypothesized that organ storage times can be extended by storing the tissue at temperatures below zero. However, at sub-zero temperatures there is a risk of ice formation and freezing damage. In this scenario, IBPs, by preventing ice growth, are potentially ideal molecules to project organs, cells, tissues, sperm, and embryos from the damages of freezing. However, the use of IBPs in cryopreservation has lagged. This is, in part, because the of difficulty in producing IBPs in large quantities and differences in ice-binding activity. Therefore, there is great interest to develop molecules that emulate or mimic the activity of IBPs that are easy to produce and highly active. Many of the naturally occurring IBPs have been characterized structurally, and their active site identified, by techniques such as x-ray crystallography and NMR. This detailed structural information has guided the design of a variety of synthetic peptide-based analogues over the past years. However, synthesis of IBP analogues is often very challenging, particularly on a large scale. Furthermore, as the precise binding mechanism between IBPs and ice is not completely understand, the design of highly active mimics remains difficult.

In this work, we took a conceptually different approach to the development of synthetic IBP mimics. Rather than building upon existing structural know-how, our study explores the use of phage display, a biological, combinatorial discovery tool, for the identification of short peptide mimics of IBPs. This strategy vastly expands the diversity space that can be screened for potential ice binding peptides, as the starting point of the phage display process is a randomized peptide library. The identification of peptides that can interact with ice, may help to provide further structural insight into the key structural determinants that govern the properties of IBPs. Phage display, furthermore, generally leads to short peptides that are composed of naturally occurring amino acids, which may also enhance the synthetic accessibility of these molecules. Using phage display, we found a 14 amino acid, cyclic peptide that was able to prevent the recrystallization of ice. Ice recrystallization is growth of large ice crystals at the expense of smaller ice crystals. Inhibiting the process of ice recrystallization is thought to be important in cryopreservation. To understand how our peptide interacts with ice, we synthesized a series of mutant peptides and preformed structural investigations by solution-state NMR and molecular dynamics (MD) simulations.

Mutational analysis revealed three residues, Asp8, Thr10 and Thr14, which were found to be essential to inhibit ice recrystallization. NMR spectroscopy studies confirmed the cyclic structure, provided an indication of peptide flexibility, and possible amino acid orientations. Molecular dynamics (MD) simulations showed that the peptide binds to ice adopting specific conformations through a combination of both hydrophobic interactions (Thr10 and Thr14) and hydrogen bonding (Asp8). Taken to together, these studies provide insight into what is required for ice binding. In a final experiment and to illustrate a potential use of short ice-binding peptides, the discovered sequence was used as a purification tag to extract overexpressed recombinant mCherry fluorescent protein from E. coli cell lysate. The peptide was able to extract approximately 50% of the mCherry protein from the solution. Overall, we feel this work will transform the field of synthetic IBP materials, allowing structure-property relationships to be probed using an accessible technique, removing the largest bottleneck to advancement. By combining experimental with computational approaches, we also provide possible insight into the mechanism of action of this peptide.