The permeability of Gram-negative bacteria has long been studied, however, serious gaps remain in our understanding of antibiotic translocation inside living bacteria (1,2). Fluoroquinolones (FQs) represent one of the antibiotic families used clinically to treat bacterial infections, showing excellent bioavailability, good tissue penetration, relatively low toxicity and broad-spectrum activity (3). FQ resistance is mostly associated with the presence of target mutations that can be magnified by a decreased penetration and an increased active efflux (4,5). Consequently, the ability of FQs to reach effective cytoplasmic concentrations is a key factor for their antimicrobial activity (Fig 1). This is illustrated by the SICAR (Structure Intracellular Concentration Activity Relationship) recently proposed for quantifying accumulation of FQs and other antibiotics (2,6).

In Communications Biology (7), Vergalli et coll., report the molecular and kinetic analyses of drug translocation by comparing the behavior of a large set of FQs in E. coli as a model of Gram-negative bacteria expressing different levels of AcrAB. A combination of drug susceptibility assays, spectro- and microfluorimetry, molecular docking, molecular dynamics simulations, and binding free-energy calculations enabled the determination of FQs activity, accumulation, and extrusion, respectively, in isogenic strains. The SICARIN (influx index) showed efficient translocation of ciprofloxacin (CIP), enrofloxacin (ENR) and norfloxacin (NOR) compared to pazufloxacin (PAZ) and fleroxacin (FLE) (Fig 2). It has been reported that the internal drug concentrations are likely related to the flexibility (number of rotatable bonds) and shape (globularity) of the drug. In this study, tested FQs sharing low globularity and low flexibility exhibit different accumulation levels indicating a role for an additional factor during penetration (7). Substituents of the FQ core (side chains in R1, R7, R8) appear to be determinant for penetration and target binding, with a marked effect of R1 and R8 substituents. These results corroborate the important involvement of N1-cyclopropyl as R1 substituent and the bulky groups at C8 position previously reported to change the molecular steric conformation (7). This supports the low SICARIN of ofloxacin (OFL) and pazufloxacin (PAZ) possessing a R8 that may induce a steric hindrance for their membrane translocation (7).

The AcrAB expression level modulates the FQs internal concentration (Fig 2) due to the affinity of specific molecules for the putative binding pocket (DPT) inside AcrB. ENR and FLE have multiple and resilient hydrophobic interactions with the HP-trap, while NOR presents a considerably lower affinity for this region. The hydration of these FQs is also different, with NOR surrounded by more water molecules than the two other FQs. A better hydration may result in a more efficient screening of the interaction with DPT residues. The limited durable interactions observed with NOR, especially with residues of the HP-trap, could impair triggering allosteric conformational changes needed for AcrB translocation.

This work demonstrates that compounds are strategically designed to overcome the membrane barrier and efflux activity, and highlights the need to study bacterial permeability as a whole: 'Influx+Efflux'. This study paves the way for rational pharmacomodulation, improving the design of FQs that bypass the membrane-associated mechanisms of resistance.

The figure illustrates the various antibiotic fluxes across the bacterial envelope through the outer (OM), the periplasm (P) and the inner membrane (IM). In green the porin inserted into the OM; in different red colors the AcrAB-TolC efflux pump; in brown the IM drug transporter (single efflux transporters). 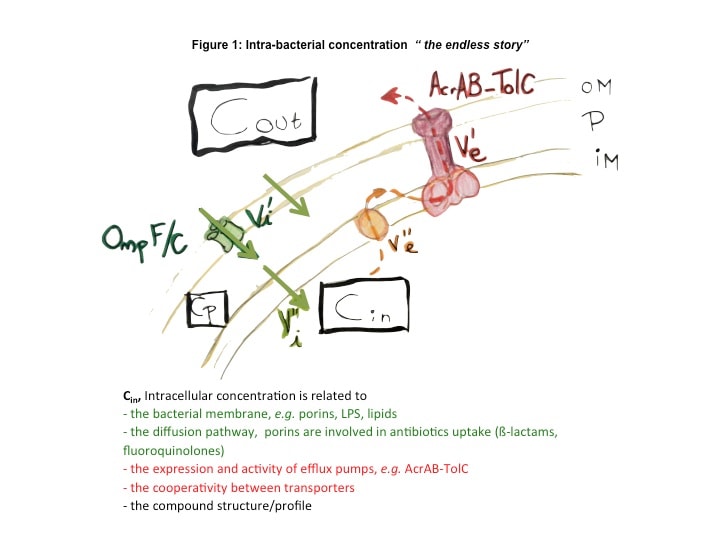 Figure 2: FQs have different influx and efflux properties measured with SICARIN and SICAREFF

SICARIN (in green, top of the figure) and SICAREFF (in red, bottom of the figure) of FQs are represented by arrows in the diagram (left panel), and boxplots (right panel). The thickness and color of the arrows depend on the SICARs measured: the thicker and darker the arrow, the higher the SICAR. The FQ core structure is shown on the left of the bacteria diagram, and R1 and R8 substituents of FQs are indicated above their names. GAT: gatifloxacin, CIP: ciprofloxacin, ENR: enrofloxacin, NOR: norfloxacin, PEF: pefloxacin, OFL: ofloxacin, PAZ: pazufloxacin, FLE: fleroxacin, LOM: lomefloxacin. 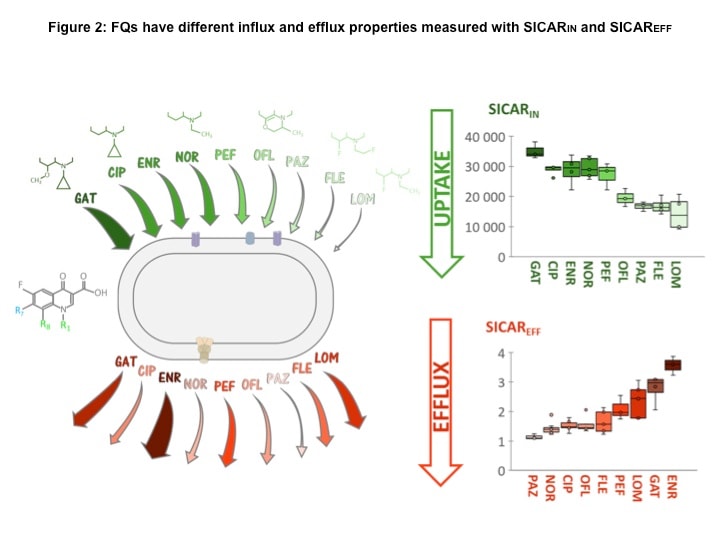 Neutralizing the toxin by kinase, an unusual toxin-antitoxin system from Mycobacterium tuberculosis