The tricarboxylic acid (TCA) cycle is a central metabolic pathway in most organisms. Heterotrophs use this pathway for catabolism, with citrate production from acetyl-CoA and oxaloacetate catalysed by citrate synthase. Classically, it was thought that the reversal of the cycle for autotrophy requires substitution of citrate synthase with another enzyme that invests ATP energy to permit the backwards reaction, i.e. citrate cleavage. In 2018, our laboratories found that the oxidative TCA cycle can be reversed without enzyme substitution in the thermophilic anaerobic proteobacterium Desulfurella acetivorans, where citrate synthase (acetyl-CoA + oxaloacetate → citrate + CoA) activity is extremely high (10 to 100 times higher than in, e.g. E. coli) (Mall et al., 2018). A similar finding for another thermophilic sulphur-reducer from a phylum Aquificae was published in a back-to-back paper by our Japanese colleagues (Nunoura et al., 2018). This reversed oxidative (ro)TCA cycle uses one ATP less for a turn, being superior to the classical ATP-citrate lyase reductive (r)TCA cycle and bioenergetically the most efficient autotrophic pathway. However, if the roTCA cycle is so efficient, why does the less efficient ATP-citrate lyase rTCA cycle even exists? We thus studied autotrophy in Desulfurella and its relatives further. Here, my story begins, when I came to the Berg lab for a PhD on the metabolism of thermophilic bacteria two and a half years ago, to follow up the studies done by my Achim Mall, who worked in the lab with Desulfurella before.

First, we decided to investigate citrate synthase in D. acetivorans. This bacterium possesses three homologous genes for this enzyme. My colleague and one of the first authors, Eugenio Pettinato, successfully purified and characterized two of them, while I struggled with the third. After solving depressing cloning and purification problems, I was finally able to purify it in a soluble form just to find that it was not active as citrate synthase. Why should it be me who confirms a wisdom that the beginning is always the hardest? In the meantime, using a proteomics approach, our collaborator Simone König delivered evidence that one of the proteins characterized by Eugenio was responsible for the citrate synthase reaction in vivo, contributing 7.2% to the total cell extract protein content. So, fortunately, it was not necessary to get “my” protein in an active form anymore, as it constituted only about 0.2% of the cell protein - and I turned to bioinformatics. This was not the most obvious decision, as the roTCA cycle lacks unique enzymes and is thus invisible for bioinformatic analyses. Still, if citrate synthase was that abundant, the roTCA cycle function could be possible to predict by analyzing the codon usage. It is expected that highly expressed genes have a characteristic codon usage pattern, and we performed this analysis for various anaerobes. One deltaproteobacterium awoke our attention, as its citrate synthase was predicted to be highly expressed. And again, I thought about my luck - it was an acetate-oxidizing heterotroph.

This sulphur-reducer, Hippea maritima, grew also without acetate, but still required ~200 mg/L yeast extract for the growth on H2/CO2. This amount of yeast extract may appear to be insignificant at first sight but would be more than sufficient to explain the observed growth. However, citrate synthase activity was high, confirming the bioinformatic predictions, and I studied whether CO2 was an important carbon source for this bacterium by following 13CO2 incorporation into H. maritima biomass. Hydrogen-utilizing anaerobes are usually cultivated in a gas mixture consisting of 80% H2 and 20% CO2, and after addition of H2 to the flasks I began to add 13CO2 from a small 13CO2 bottle from previous studies. At about 8% CO2 in the first flask the gas bottle was almost empty. For the two repetitions, I was able to scratch up 4% CO2 – but that was it. What a disaster! But what did I have to lose? I calculated that 4% CO2 should be sufficient to ensure the growth of H. maritima and, feeling relieved, inoculated the cultures. In fact, there was no choice: due to the ongoing Corona pandemic, the next 13CO2 supply from the USA was not expected for months.

However, the cultures grew unexpectedly much worse with 4 or 8% CO2 than with 20% CO2. For the analysis of 13C incorporation, we sent the samples to the laboratory of Wolfgang Eisenreich at the TU Munich. His PhD student Thomas Steiner, who shares the first authorship, analyzed the cell pellets for 13C in amino acids by mass spectrometry and sophisticated isotope analysis. We were disappointed with the results at first: the 13C-excess was low, with most of the cellular carbon originating from yeast extract. Nevertheless, looking closer, we recognized the presence of fully labelled amino acids like aspartate, alanine or glutamate, which was a clear sign for the functioning of a CO2 fixation pathway. To clarify whether it was the roTCA cycle, I performed a growth experiment with [1-13C]glutamate and unlabeled 4% CO2 to check the presence of a citrate cleavage reaction. In the cell, [1-13C]glutamate might be oxidized, losing its 13C-label, or it may be incorporated via citrate cleavage. According to genomic data, the latter conversion could only be catalyzed by a citrate synthase reaction in H. maritima. In fact, we saw 13C-incorporation, confirming the functioning of the roTCA cycle.

We also observed a much higher 13CO2 incorporation level in the 8% compared to the 4% CO2 samples. Was the roTCA cycle dependent on CO2 partial pressure? Indeed, the growth of H. maritima and D. acetivorans was dependent on the CO2 concentration. In contrast, Desulfobacter hydrogenophilus - using the ATP-citrate lyase dependent variant of the cycle - grew equally well at 1 and 40% CO2. After a new bottle of 13CO2 had finally arrived, we repeated the 4% growth experiment along with the 10% and originally planned 20% 13CO2 experiments and confirmed the CO2 dependence. Our data suggested that the pyruvate synthase reaction (acetyl-CoA + CO2 + reduced ferredoxin -> pyruvate + CoA + oxidized ferredoxin) was responsible for the high CO2 dependence. This is a thermodynamically difficult step and a high acetyl-CoA/CoA ratio is required. However, the reversal of the citrate synthase reaction and thus the functioning of the roTCA cycle is only possible at low acetyl-CoA and high CoA concentrations, making acetyl-CoA carboxylation challenging. In H. maritima, this unfavorable condition is compensated by an increased CO2 concentration, thus allowing the assimilation of acetyl-CoA, the product of the roTCA cycle. H. maritima and D. acetivorans grow in hot vents, where the CO2 concentration can be higher than 90%. In natural CO2 reservoirs at moderate depths, the CO2 pressure can even be 106 times higher than the ambient pressure in air. The roTCA cycle or other yet-to-be-discovered pathways that are thermodynamically impossible at ambient CO2 concentrations may thus be widespread in certain natural environments. 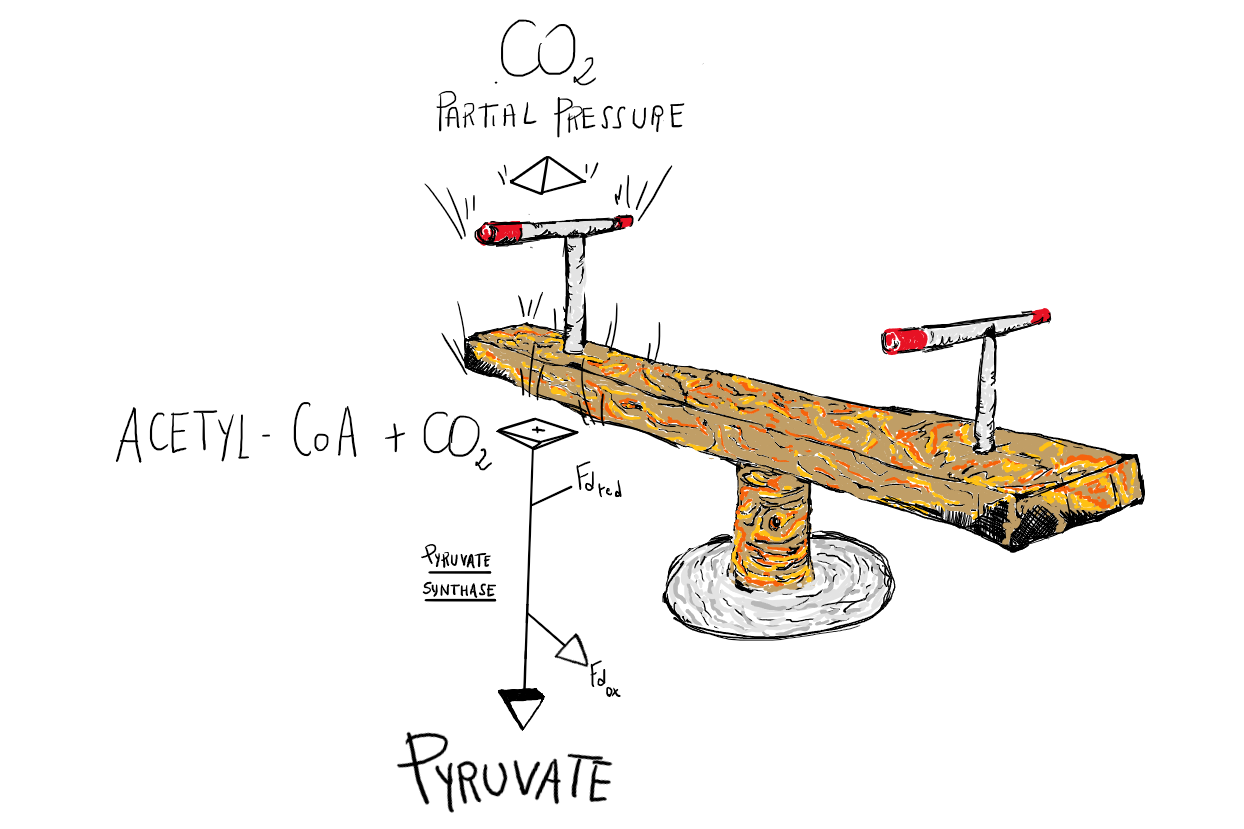 In retrospective, the answer to the initial question, why the less efficient ATP-citrate lyase rTCA cycle exists, appears to be both obvious and logical: to overcome the unfavorable equilibrium constant, the substrate concentration needs to be increased. The roTCA cycle functions only at high CO2 conditions. It was fortunate to have turned to H. maritima: The 13C-analysis indicating which amino acids are preferentially consumed from the medium and which are synthesized from 13CO2 under different conditions would not have been possible in a “less heterotrophic” species not capable of assimilating such a wide range of amino acids. As it often happens, a mistake in a preliminary experiment turned to a breakthrough. Sometimes, one simply need to keep eyes wide open – and the answer will come.

Back to Nature
Next 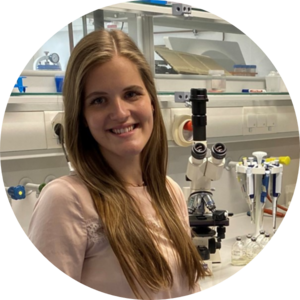