A lesser-known aspect of antibiotic resistance is the ability of bacterial persister cells to survive antibiotic treatment through dormancy. We find that indole signalling increases E. coli quinolone persisters, suggesting that indole inhibition may provide a method to enhance quinolone antibiotics

+2
Ashraf Zarkan and 2 others See all
Research Associate, University of Cambridge
Follow 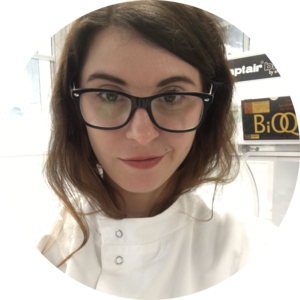 Persisters: the poor relation in the antibiotic resistance crisis:

Antibiotic resistance threatens a worldwide crisis in human and animal health. An important, but poorly understood, aspect is the ability of sub-populations of genetically sensitive bacteria to survive antibiotic treatment by entering a dormant state. These cells are known as persisters[1]. The emergence of persisters from dormancy after a course of antibiotics leads to the recurrence of disease symptoms [2]. There is thus an urgent need for innovative treatment strategies to combat antibiotic persisters.

Indole, an aromatic signalling molecule, is produced by over 85 species of bacteria and has been shown to affect persister formation by indole-producing and non-producing bacteria. However, whether indole enhances or suppresses persisters has remained a subject of debate. One reason for contradictions in the literature may be that there exist two distinct modes of indole signalling: persistent and pulse. In persistent signalling, indole is present for an extended period at a relatively low concentration. By contrast, in pulse signalling, a brief but intense elevation of intracellular indole is observed during transition from exponential to stationary phase[3].

Another possible reason for confusion over the link between indole and persisters is that the effect of indole is antibiotic-specific. Our study focussed on the quinolone antibiotics[5]. Quinolones target bacterial DNA gyrase, an essential tetrameric enzyme comprised of two subunits, GyrA and GyrB. A previous study implied a connection between indole and gyrase, showing that indole, at the high concentration seen during pulse signalling, inhibits the DNA supercoiling activity of gyrase in vitro[4].

We compared the frequency of persisters in cultures of indole-positive and negative E. coli after treatment with quinolone antibiotics. The indole-negative strain had fewer persisters after quinolone treatment, the biggest effect (approx. 10-fold) being seen with ciprofloxacin. This suggests that indole production enhances survival against quinolone antibiotics. Significantly, the effect appeared to require pulse signalling, characterised by high concentrations of indole. Remembering that higher indole concentrations also inhibit DNA supercoiling by gyrase, we explored the possibility of a direct interaction between indole and DNA gyrase. In silico docking suggested that indole docks in the ATP binding pocket in the GyrB subunit. This provided a plausible mechanism for inactivation of the enzyme and the induction of cellular dormancy. We suggest that the indole pulse during stationary phase entry inhibits DNA gyrase in a sub-population of cells by binding to the GyrB subunit. Binding might cause local protein refolding that provides a “memory” of the indole pulse. Inactivation of DNA gyrase removes its ability to create the DNA double strand break that is stabilised by quinolone antibiotics. At the same time, the reduction in DNA gyrase activity would inhibit DNA replication and transcription, pushing cells towards a dormant or persister state.The findings and hypothesis are summarised in the figure below: 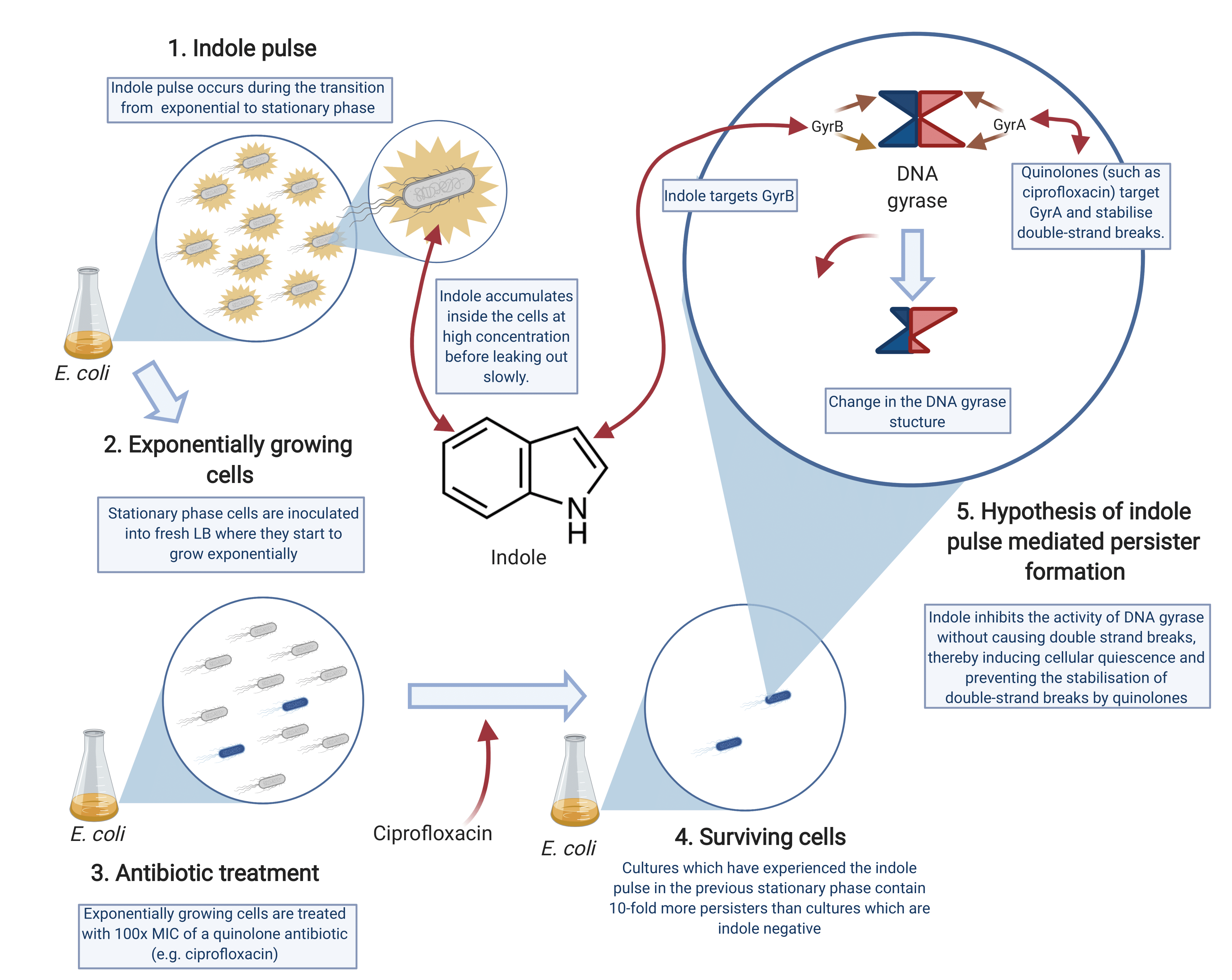 The eradication of indole pulse signalling may offer a route to reduce quiniolone persisters in E. coli, which could have major clinical relevance especially in cases where E. coli persisters are linked to the relapse of infections such urinary tract infections.