ZIKV is an infectious disease that has become an important concern worldwide, it associates with neurological disorders and congenital malformations in adults, also leading to fetal intrauterine growth restriction and microcephaly during pregnancy. We examined the effects ouabain in ZIKV infection.

ZIKV is an infectious disease that has become an important concern worldwide, it associates with neurological disorders and congenital malformations in adults, also leading to fetal intrauterine growth restriction and microcephaly during pregnancy. This virus has rapidly spread to more than 70 territories and countries. However, to date, there is no vaccine or specific approved antiviral drug against ZIKV, there is an urgent need to explore novel antiviral targets and develop effective compounds.

Ouabain and digoxin are two inhibitors that target Na+/K+-ATPase, they are cardiac glycosides used to increase the contraction force of the heart muscle in patients with congestive heart failure and stabilize heart rhythm in patients with atrial arrhythmias. Therefore, we investigated their antiviral effect on ZIKV both in vitro and in vivo.

In the study, we found that ouabain and digoxin inhibited ZIKV RNA synthesis in a dose dependent manner, whereas neither inhibited the initial translation of replicon RNA, confirming that these drugs inhibit ZIKV infection at the replication stage.

To evaluate whether ouabain protects against ZIKV infection in vivo, we used 6- to 7-week-old type I IFN signaling knockout line (Ifnar1−/−) mice model, our result found that ouabain decrease ZIKV viral load in adult mouse brain, positive cells (ZIKV and GFAP colocalized signals) were extensively detected in the vehicle-treated group, whereas the ZIKV signal was absent in the ouabain-treated group.

Moreover, to confirm the protective effects of ouabain treatment in pregnant mice model, placental tissues and fetal brains were examined by histological analysis. In addition to the decrease in viral load, placental damage was also alleviated by ouabain. ZIKV infection caused severe injury of the placenta, leading to the loss of trophoblasts and reductions in the labyrinth layer size; these damages were not observed in the ouabain-treated group. Similarly, histopathological assessment of the fetal brains demonstrated that cortical thickness was decreased in the vehicle-treated mice, whereas it remained normal in ouabain-treated mice. As ZIKV shows tropism for proliferative neural progenitor cells (NPCs) and downregulates the expression of NPC markers such as SOX2, we measured SOX2 levels after ouabain treatment. Consistently, the decrease in SOX2-positive cells after ZIKV infection was relieved by ouabain treatment, demonstrating that developmental defects were substantially reduced by ouabain treatment of ZIKV-infected pregnant mice. These findings indicate that ouabain can substantially reduce ZIKV associated injuries in the fetal brain and thus prevent the development of microcephaly. 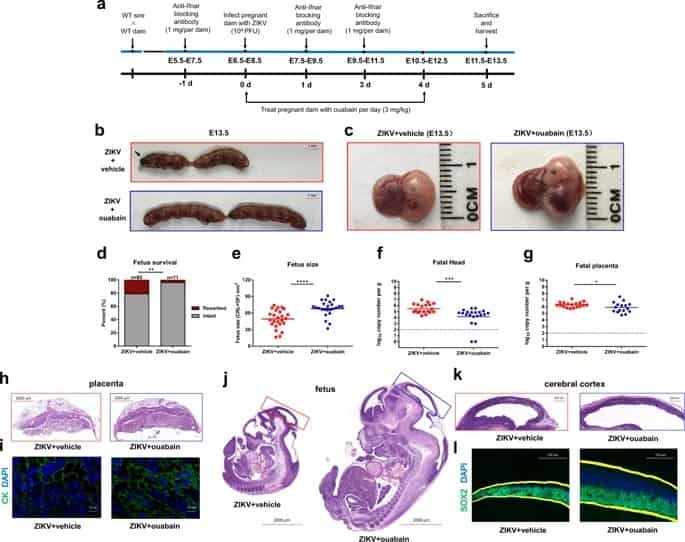 Together, these findings provide valuable information for future clinical trials examining the effects ouabain in ZIKV infection. Furthermore, our result indicate that Na+/K+-ATPase is a promising pharmacological target in ZIKV infection.