Tyler and Barghoorn's discovery of fossils of microorganisms in almost 2 billion years old siliceous rocks (cherts) from Canada, in the middle of the 20th century, led to two remarkable breakthroughs: not only can microbes be fossilized, but also, and more importantly, the origins of life date back to immensely remote geological times. This understanding has led and continues to lead to significant efforts to document the early stages of biological evolution. In spite of certain achievements, notably due to technical progress, the traces of life reported from the study of the oldest rocks preserved on Earth, from the Archean, are very often the subject of controversy.

The Buck Reef Chert, Kaapvaal Craton, South Africa (Figure 1), is among the oldest best-preserved sedimentary rocks on the surface of the Earth. It is mainly a succession of alternating bands of light and dark cherts deposited between 3.4 and 3.3 billion years ago. Carbonaceous films preserved in these rocks have been interpreted by some researchers as the remains of fossilized microbial mats. In spite of this, the morphological and isotopic criteria used to favor a biological origin are the same as those which were debated for other Archean candidate fossils.

One of the main issues limiting our understanding of the Archean fossil record is due to the geological history of these rocks. Indeed, the remains of micro-organisms that would have been preserved in Archean rocks have inevitably undergone morphological and geochemical transformations during their geological history. It is thus difficult to distinguish authentic microfossils from organic microstructures that may have been formed by purely physico-chemical processes during the Archean. The general perception in paleobiology is that geological burial leads to the convergence of the chemical composition of organic matter from different sources, thus reducing its value in distinguishing them. These Archean rocks having all been exposed to high temperature during metamorphism, it therefore seemed illusive to expect diagnostic molecular information about the sources of Archean organic matter.

Yet, in a paper published today in Communications Earth & Environment, we present very promising results for the advancement of this quest. From spatially resolved investigations of the chemical composition of 3.4 billion year-old organic films from a sample of the Buck Reef Chert (Figure 2), we show that despite their morphological similarities (Figure 2a), these films are chemically very different from each other, as indicated by data obtained by X-ray absorption microspectroscopy at the carbon K-edge (Figure 2b).

As the films all have the same post-depositional history, this geochemical diversity is most likely inherited, reflecting original chemical differences that have not been completely obliterated by a yet complex geological history punctuated by several metamorphic episodes. The organic films preserved in these Archean cherts thus carry chemical information directly related to their original molecular compositions. These results thus open the perspective of reconstructing the initial chemical nature of the Archean microorganisms from their fossils, provided that the geochemical transformations they underwent are correctly understood.

Check out our paper here. 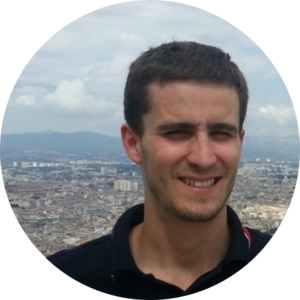