Nothing in biology makes sense except in the light of evolution

Parasites and parasitism constitute a success story: up to half of Earth's 7.7 million known species are parasitic, and this type of lifestyle has evolved independently countless times. 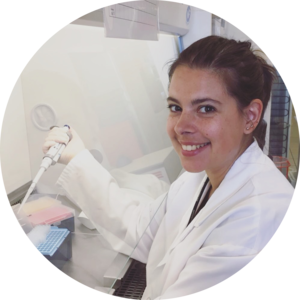 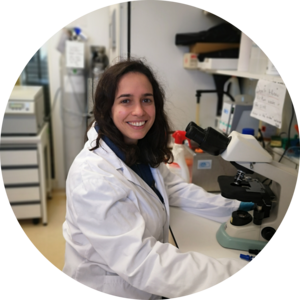 Yet, despite their diverse origins and whether they have undergone extensive diversification or not, they all need to adapt and evolve to continue to prosper in their parasitic lifestyle. They must face the same set of selective pressures and solve similar problems associated with host-to-host transmission, host-cell invasion, and sustainable exploitation of host resources.

What work led to this paper?

Apicomplexan parasites are single-celled, obligate intracellular parasites defined by the presence of an “apical complex” - a group of cytoskeletal structures and organelles located at the anterior end of the cell. The apical complex is a critical compartment for parasites, because it regulates the events leading to host cell invasion. Out of all the remarkable structures of the apical complex, rhoptries are pear-shaped organelles that inject proteins into the host-cell (crossing not only the plasma membrane of the parasite but also that of the host), to support invasion and subversion of host immune function. But, how!?

The molecular mechanism by which they are discharged and their effectors delivered into the host cytoplasm was unclear, and no orthologues of secretion genes from bacteria, yeasts, animals or plants were found associated to rhoptry secretion in Apicomplexa (with only one exception). Rhoptry secretion could thus represent an unconventional, parasite specific, secretory mechanism…

Luckily, pioneering ultrastructural work done at the turn of the '80s pointed out some resemblance between secretory organelles in apicomplexan parasites and ciliates - their free-living relatives. Moreover, a rosette of 8 intramembranous particles, essential for fusion and secretion in free-living ciliates, was found to be present also in several apicomplexan parasites at the site of exocytosis, where the fusion takes place.

These resemblances were all we needed to start.

Back and forth between free-living Ciliata and apicomplexan parasites. 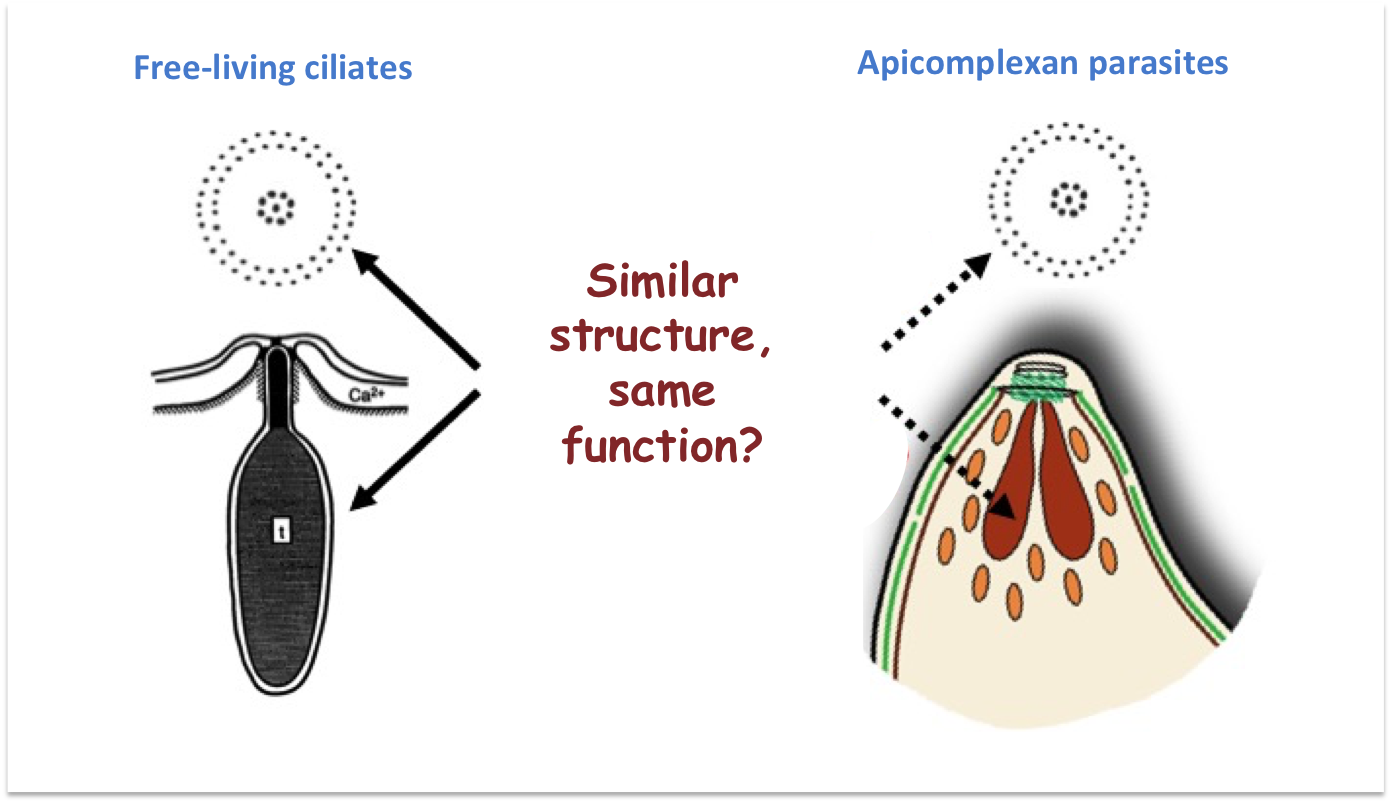 Building on the ultrastructural work done previously, we explored the similarities between organelle secretion system in ciliates (Tetrahymena thermophila and Paramecium tetraurelia) and apicomplexan parasites (Toxoplasma gondii and Plasmodium falciparum). We used cutting edge imaging techniques to study the structural elements and their architecture, and state-of-the-art molecular biology methods to explore the mechanism and molecular composition of these secretion systems.

We cultivated tons of parasites and free-living ciliates, performed uncountables experiments, established the most amazing collaborations (Turkewitz Lab, specialists in secretory organelle biogenesis of Ciliata and for hobby in monarca butterfly metamorphosis and release; and Chang Lab, masters of Cryo-electron tomography of the parasite apex in unfixed condition), I lived in Chicago for a while, we shared and discussed results in conferences (won one of the prizes at the Molecular Parasitology Meeting with preliminary results in 2018!), passed hours and hours and MORE hours looking at parasites under different types of microscopes. Dare I say we looked at them for hundreds of hours? Yes.

What did we find?

That rhoptry exocytosis depends on a fusion rosette of intramembrane particles visible on the plasma membrane at the site of secretion. Rosette formation requires the “non discharge” complex (Nd6, Nd9, NdP1, NdP2). This critical structure (the fusion rosette) and the genetic elements necessary for its assembly are akin to the exocytic machinery of ciliates, their free-living relatives. Our data suggests a common ancestry for this fusion machinery that adapted, in two groups of protists that diverged hundreds of millions of years ago, to radically different environments. This same machinery is involved in self-defence in the free-living ciliates and supports host-cell invasion in intracellular parasites.

But it doesn’t end here!

We also noticed something that caught our attention: one cardinal protein responsible for exocytosis was present on an enigmatic apical vesicle visible in at the very tip of several apicomplexan parasites, but absent in free-living ciliates. Our results indicate that this parasite-exclusive vesicle is sandwiched between the tip of the rhoptry and the rosette, and may reflect the additional complexity required for parasitism and cell invasion, in which exocytosis must be coupled with injection of rhoptry content through the host cell membrane – in contrast with free-living organisms, where secretory organelles are more simply discharged into the environment to thwart predators. In support of this hypothesis, a similar vesicle is present at the apex of Perkinsus marinus, an oyster’s parasite phylogenetically considered an ancestor both of free-living ciliates and apicomplexan parasites, and a key taxon for understanding unique adaptations to parasitism.

CRYO-ET view of the fusion rosette of intramembranous particles visible on the plasma mambrane and sagittal view and 3D reconstruction of the interactions between the tip of the rhoptry (orange), the apical vesicle (pink) and the fusion rosette (purple).

Next challenge? Understand precisely the role and constitution of the apical vesicle, and further clarify how the molecular elements interact with each other to promote membrane fusion and rhoptry exocytosis. 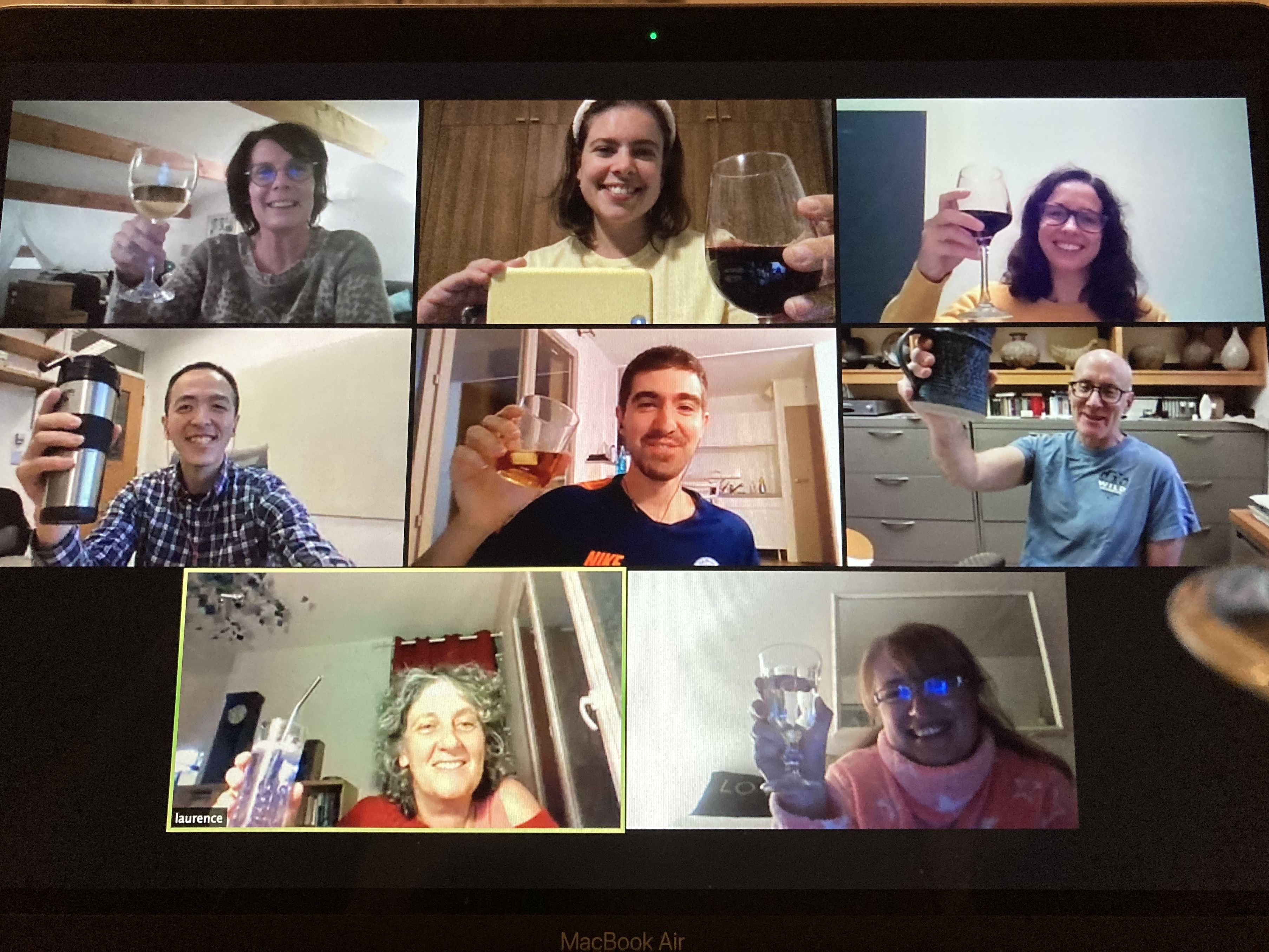 I joined the lab in January 2019, the right moment. They had an amazing hypothesis, but they needed to confirm it in Plasmodium falciparum, the model parasite I worked on during my PhD. It was the perfect match! So, I put my hands-on deck and study the role of one of the critical players of the secretion mechanism in the blood stages of P. falciparum! What an adventure! Lots of crazy schedules (sleep in the lab is a real option when working with Plasmodium) and funny experiments that ended up confirming the essentiality of that player for rhoptry exocytosis in P. falciparum, which extended the findings to a larger group of apicomplexan parasites.

The story seemed ready to publish, but sometimes it’s easier said than done. It took a while and some stressful days, but here we are! Huge shout out to our collaborators that make our story quite thorough!