Who are the bacterial hosts of sponge-associated phages? How are symbiont phages distributed in sponges? What are their replication strategies?

A mouthful of seawater typically contains twice as many virus particles as there are inhabitants in the US. While we are all acutely aware of how viruses can make humans sick, the vast majority of viruses in nature leave us on the sidelines, seeking a more abundant target - bacteria. These bacteria-infecting viruses, known as bacteriophages (or simply, phage), are increasingly recognised as important members of host-associated microbial communities. Yet, despite the sheer abundance of phages in the oceans, we still have limited knowledge about the phage-bacteria interplay when marine animals set the stage.

Sponges provide a fascinating study system in this regard, as they combine dense symbiont consortia with a simple morphology rooting deep in the animal kingdom. Therefore, I was eager to study the interplay between sponge-associated phages with symbiont bacteria and host-cells. At that time, however, there was no comprehensive published work on sponge-associated phages with molecular approaches. So, I applied for funding and, without having done any field research at sea before, set off to Barcelona to systematically sample sponge-associated virus communities of neighbouring sponge species in comparison to the surrounding seawater. A severe sunburn and a stay in Bas Dutilh’s remodelled garage for data pre-processing later, we had the data to address fundamental questions on the lifestyle of phages in sponges.

The results published in our recent paper in The ISME Journal highlight the intertwined relationship between sponges, phages, and their bacterial symbionts. In silico host predictions revealed that phage-microbe infection networks in sponges are distinct from those in seawater despite their heavy environmental exposure. However, while we made progress in predicting phage-microbe interplay, we were flying blind on the spatial association of the newly identified sponge symbiont phages with their cellular environment. This was due to the lack of a method to spot specific phages in diverse microbial consortia at electron microscopy resolution. After spending half a year of intensive work, I established a new correlative light and electron microscopy (CLEM) in situ imaging approach — PhageFISH-CLEM — allowing for the localisation of specific viruses within their cellular landscape.

By combining in silico host predictions with this new tool, we discovered rampant phagocytosis of sponge symbiont infecting phages by sponge cells. Consequently, we hypothesised that the phagocytosis symbiont phage particles by sponge cells modulates phage-bacteria ratios in the sponge and fosters lysogenic replication. To test for differences in replication modes between seawater and sponge-associated phages, we employed a machine learning approach in combination with a search for marker genes. Indeed, this identified a more temperate lifestyle of phages within sponges that contrasts lytic phages in seawater.

Thus, our findings characterise lifestyle adaptations of phages within sponges and underline the role of animal host cells in modulating phage-microbe interactions. 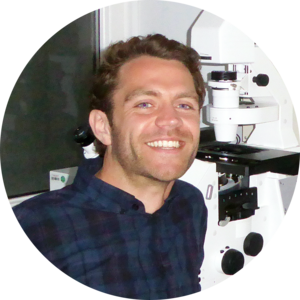