Most domestic and industrial wastewater is treated using the activated sludge process, whose microbial community is organized as flocs. Importantly, instead of discarding all the subsequent biomass produced, as was a feature of most of the earlier treatment methods, this ‘sludge’ is harvested and recycled back into the system, thus selecting the best suited populations to treat raw sewage, ensuring rapid treatment times [1].

Although the activated sludge process was ‘invented’ more than 100 years ago, it still suffers globally from several operational problems. These include production of a stable, viscous foam on the reactor surfaces (Fig 1), which is a flotation phenomenon, requiring air bubbles, surfactants and hydrophobic bacterial cells [2]. The first two are integral parts of the actual process and the mixed liquor respectively. The hydrophobic particles are bacterial cells, and realistically are the only component of the three which might be controllable practically. Until recently foam control was the task of engineers, and so all attempted control strategies were engineering in nature. They were generally non-specific, and often led to the demise of the desirable bacteria. It seemed much more sensible to us and others that as foaming is a microbiological problem, its eventual control would only arise if its microbiology was better understood. It soon became obvious, not too surprisingly, that the foam communities differed markedly between plants, explaining why engineering ‘solution never worked for all plant, and emphasizing that any control measures should be specific to each foam. 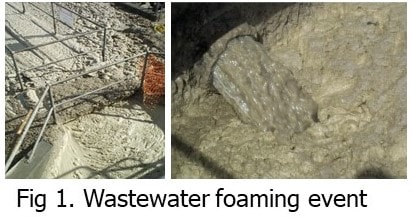 Culture dependent and independent based global surveys revealed that most foams were stabilized either by the filamentous actinobacterium Candidatus Microthrix parvicella or the phylogenetically distinct Gram-positive Actinobacteria, the Mycolata, which alone possess an outer hydrophobic membrane, consisting of these long chain 3-hydroxy 2-alkyl branched fatty acids called mycolic acids of various lengths [3]. Over the past 30+ years we have cultured many Mycolata from plants across the world. The most commonly seen are the acutely angled branching filamentous Skermania piniformis and the right-angled branching filamentous Gordonia amarae (Fig 2), which, because its distinctive morphology is shared with other Mycolata is sometimes referred to as Gordonia amarae like organisms (GALO).

After increasing interest 30-40 years in using bacteriophages to control human bacterial infections, Jacques Soddell decided that phage therapy may work for specifically controlling foaming in activated sludge plants. The premise was that any phage chosen should not wipe out the targeted population, (Mycolata play important role) in degrading recalcitrant substrates, but reduce the population to below the threshold level for foam stabilization. To avoid host cell resistance, cocktails of phages should be used. He and his PhD student Julie Thomas isolated Mycolata lysing tailed phages and characterized these as double stranded DNA members of the Siphoviridae [4]. Sequencing their genomes, considered essential information for selecting phages rationally for cocktails. The only technique then available, the Sanger method, meant few genome sequences were generated. With improvements in DNA sequencing, we tried again, and isolated and characterized >50 of phages lytic for many foaming Mycolata. However, none capable of lysing G. amarae were isolated. It was also clear from papers published after ours from other labs that they too had similar problems.

We sought to understand why no phages were found lytic for G. amarae.  The genomes of several strains from around the world were sequenced. Not only did the genomic data suggest that G. amarae should be split into two distinct species, G. amarae and G. pseudoamarae, but it revealed that both of these species genomes encoded extensive antiviral defence systems, which did not appear in genomes of some other Gordonia species susceptible to phage lysis such as G. terrae and G. rubripertincta for which >2000 phages have been isolated to date. These included high numbers of restriction endonucleases and CRISPR-Cas systems and in G. pseudoamarae only a bacteriophage exclusion (BREX) system. We believe possession of these is consistent with the resistance to phage lysis by G. amarae, although more strains should be analysed.

During our routine screening for wastewater phages using standard Gordonia terrae lawn plate methodology, where occurrence of host bacteria lysis appears as clear plaques on the bacterial lawn we found, from a sample from a treatment plant in outer Melbourne, which we, without thinking too much of it, assumed it was a phage. However, when we sequenced its genome we found it was not in fact a phage but a nanobacterium able to pass through bacteriological membrane filters, and which based on 16S rRNA sequence was a novel member of the phylum Saccharibacteria, never previously found in activated sludge plants but related to nanobacterial Saccharibacteria which had been isolated and co-cultured from the oral cavity.

It too required the host’s presence to grow, but at this stage it is unclear what the basis for this is. Given this was a predatory bacterium, not a virus, we wondered if this organism, which we have named Candidatus ‘Mycosynbacter amalyticus, would be able to bypass the antiviral defences of G. amarae and G. pseudoamarae. To our surprise and delight it not only lysed this, but screening showed it could lyse several but not all the species of the Mycolata  which include Dietzia, Millisia, Gordonia, Rhodococcus and Nocardia but none of the genera Mycobacterium, Streptomyces, Tsukamurella or S.piniformis.  The reasons for this host response are not known. Nor is why so many Ca. Mycosynbacteria are attracted so rapidly and in such large numbers to the host cell surface, or of its parasitic relationship with its Mycolata host. 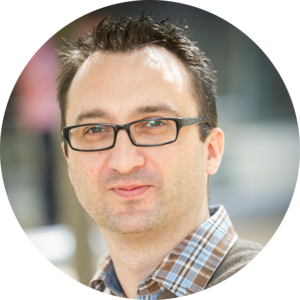