Understanding how bacteria talk to each other using autoinducer-2

In 1990s, Bonnie Bassler and colleagues1 discovered a quorum sensing signal called autoinducer-2 (AI-2), which is released by a large cohort of bacteria and has the capacity to mediate both intra- and interspecies communication. Despite the hypothesis that AI-2 is a kind of "bacterial esperanto"2, only two types of AI-2 receptors, LuxP and LsrB, have been identified to date in limited bacterial families. Whereas LuxP has been found exclusively in Vibrio spp., LsrB are present only in enteric bacteria and some members of the Rhizobiaceae, Bacillaceae and Clostridiaceae families, casting doubts on the universality of AI-2 signaling. Nevertheless, responses to AI-2, including changes in phenotypes and gene expression, have been widely detected in bacteria lacking LuxP- and LsrB-type receptors, strongly suggesting the existence of yet undiscovered receptors for this autoinducer. Earlier attempts to discover novel types of AI-2 receptors using either bioinformatics approaches or chemical probes were not successful3. We thus suspected that undiscovered AI-2 receptors might be evolutionally distinct from LuxP and LsrB. Using an alternative strategy, our new research identifies a third type of AI-2 receptor, consisting of a dCACHE domain.

The opportunistic pathogen Pseudomonas aeruginosa that do not code for LuxP- or LsrB-like AI-2 receptors have been shown to respond robustly to AI-2, leading to changes in gene expression and phenotypes such as biofilm formation and virulence production3,4. Although P. aeruginosa is a good model for studying previously unrecognized mechanisms of AI-2 perception, it was difficult for us to identify AI-2 receptors from biofilm- and virulence-related genes. Since AI-2 has been identified as the chemotactic signal involved in autoaggregation and biofilm formation in Escherichia coli5,6, we hypothesized that it might also induce chemotaxis in P. aeruginosa. Using chemotaxis assays, ITC experiments, biofilm formation assays and molecular docking analyses, our results suggest that AI-2 binds to the dCACHE domain of the chemoreceptors PctA and TlpQ of P. aeruginosa, thus inducing chemotaxis and biofilm formation.

Given that the dCACHE domain is the most abundant family of extracytoplasmic sensors for all major types of signal transduction proteins in bacteria7, we next investigated whether other types of dCACHE-containing signal transduction proteins have the capacity to bind AI-2. To identify putative AI-2 sensors, 6 dCACHE domains structurally homologous to that of PctA were overexpressed, and we found AI-2 is also a ligand for the histidine kinase KinD from Bacillus subtilis and the diguanylate cyclase rpHK1S-Z16 from Rhodopseudomonas palustris (Figure 1). Using bioinformatics tools and in vitro experiments, our results further suggest that nearly 1500 dCACHE-containing signal transduction proteins predicted to function as methyl-accepting chemotaxis proteins, histidine kinases, c-di-GMP synthases and phosphodiesterases, serine phosphatases, serine/threonine kinases, adenylate- or guanylate cyclases from bacteria and archaea are potential AI-2 receptors. 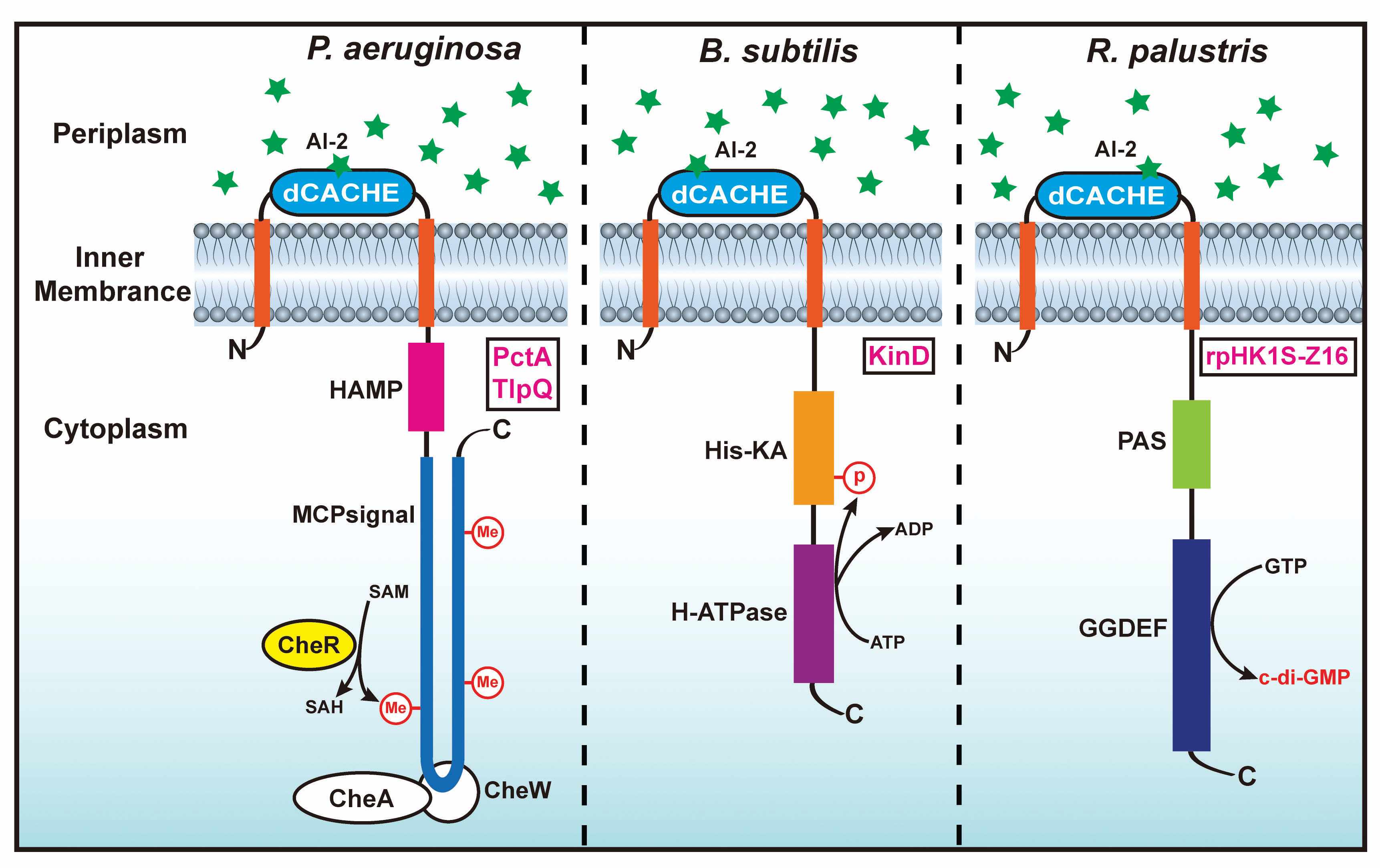 Our work provides important new insights into the mechanisms for the detection of and response to AI-2. These findings could help us to understand how AI-2 functions as a signal for intraspecies and interspecies communication in prokaryotes. Also, the identification of widely occurring AI-2 receptors paves the way for the manipulation of AI-2-mediated beneficial or hostile behaviors of polyspecies communities in niches of environmental or medical importance.

The full paper (“Sensing of autoinducer-2 by functionally distinct receptors in prokaryotes”) is available at Nature Communications: https://www.nature.com/articles/s41467-020-19243-5