Thanks to single-cell genome analysis techniques, we discovered that Vampirococcus, a predatory bacterium described in 1986, belongs to the enigmatic CPR bacterial supergroup.

From time to time, some lakes around the world change their normal color and acquire a striking bloody appearance (Fig. 1). This phenomenon was certainly a source of astonishment, if not fear, for ancient people but we know today that it is due to the proliferation of anoxygenic photosynthetic purple bacteria, a particular type of bacteria that contain pigments conferring a red to pink tint to the cells. These bacteria bloom when the water is deprived of oxygen, most often during the warm season. After some time, these colored cells disappear and the lakes turn back to their normal. It was not without big surprise that Ricardo Guerrero, Lynn Margulis and co-workers discovered in the ‘80s that their demise was due, at least in part, to predation by other bacteria [1]. They observed that the big photosynthetic bacteria were killed by tiny cells that attached to their surface and sucked their cytoplasmic content. Up to then, predation was considered to be an attribute exclusive to eukaryotes. Because of this unusual feeding mechanism, they decided to call this microscopic predator Vampirococcus as a clear allusion to the blood-sucking vampires. Nevertheless, despite their singularity, these organisms were very rarely reported afterwards and entered into some kind of oblivion.

Figure 1 – The Lake Cisó (Estanyol d'en Cisó) during a spectacular bloom of photosynthetic anoxygenic purple bacteria. This lake is one of the first places where Vampirococcus was observed [1]. Photo credit: Ricardo Guerrero.

Thirty years later, we were studying the spectacular microbial mats that cover the bottom of the inland saline lake of Chiprana, in northeastern Spain (Fig. 2a-c). These mats contain a rich community of anoxygenic photosynthetic bacteria easily visible as a purple layer in mat sections (Fig. 2d), notably with species belonging to the family Chromatiaceae. We collected samples that we kept alive in aquaria back in the lab and observed, after a few days of incubation, a massive bloom of these Chromatiaceae in the aquarium water. Seeing under the microscope that many of these cells had small epibionts attached to their surface reminded us of something that we had heard long time ago. Indeed, some of us had the chance of enjoying several visits of Lynn Margulis to our lab at the time we were PhD students and, during one of those visits, she presented her work on Vampirococcus. It was thus a very exciting surprise to see these predators in our samples and immediately decided to carry out their molecular identification using tools that were not yet available decades ago when Vampirococcus was observed for the first time. 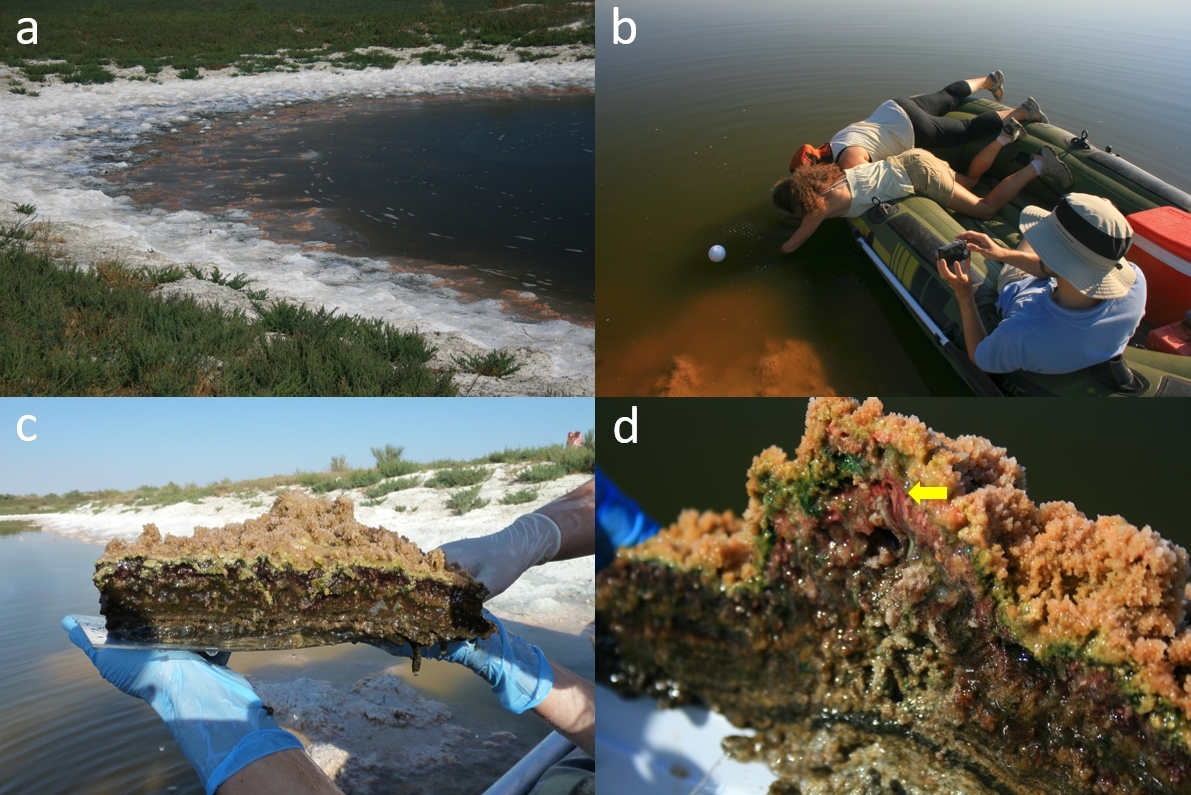 By a lucky coincidence, just a few months before we sampled the Chiprana Lake, we had bought a brand new micromanipulator as part of the equipment of the Unicell single-cell platform in our lab. Everything was ready to collect Vampirococcus cells, observe them (Fig. 3) and sequence their genome. Using a combination of several whole genome amplification (WGA) techniques and massive Illumina sequencing, we were able to determine the complete genome sequence (1,3 Mbp) of our Vampirococcus species (which we named Vampirococcus lugosii). This sequence has revealed many interesting results, first of all, the taxonomic identity of this elusive predator, which turned out to be a member of the poorly-known Candidate Phyla Radiation (CPR), more specifically related to the Absconditabacteria (previously known as Candidate Division SR1). CPR bacteria have small genomes and very limited biosynthetic metabolic capabilities, which suggest that they depend on other organisms to obtain many essential cellular components (amino acids, lipids, nucleotides, etc.) [2,3]. However, the nature of this relationship (either mutualistic, neutral or parasitic) had been disclosed only for some members of the Saccharibacteria, the only CPR species cultured so far, which are parasites of Gram-positive bacteria [4-5]. Our discovery that Absconditabacteria also contain parasitic/predatory species like Vampirococcus supports the hypothesis that this lifestyle is most likely generalized in CPR bacteria, which would explain why they lack most biosynthetic pathways. 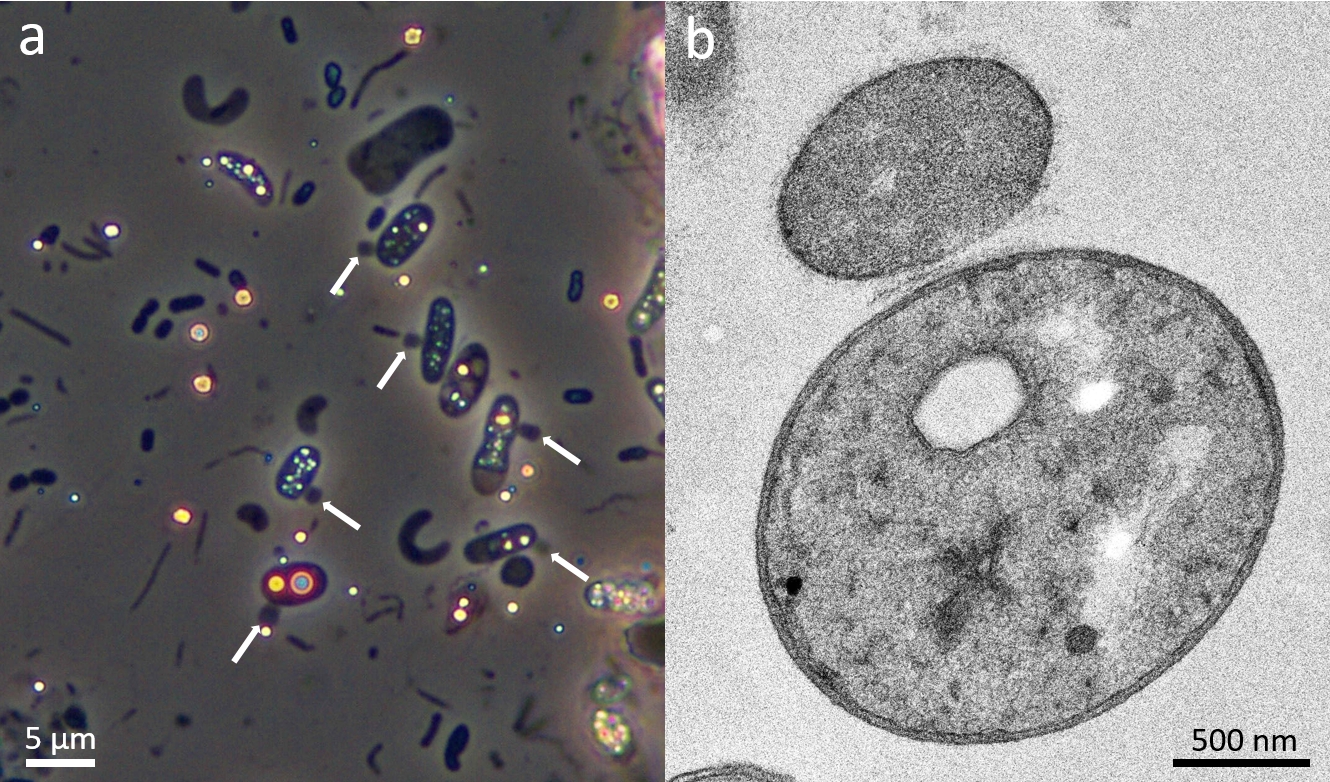 In contrast with the reduced repertoire of biosynthetic metabolism genes, the Vampirococcus genome encodes many genes responsible of the construction of an elaborate, fibrous cell surface likely involved in complex interactions with the host. In addition to proteins that attach Vampirococcus to its victim (including several giant proteins and type IV pili), it secretes a variety of enzymes that perforate the host cell wall and membrane and allow this tiny predator to suck the cytoplasmic content using a battery of transporters. Then, a rich collection of degrading enzymes breaks down this content into the simpler molecules (amino acids, nucleotides, etc.) that Vampirococcus needs to build its macromolecular components.

Genome comparison suggests that gene loss has been pervasive during the evolution of CPR bacteria. However, new genes have also evolved in these organisms. In the case of Vampirococcus, they include several new effector enzymes encoded in two different CRISPR-Cas loci. Although it has been shown that Absconditabacteria are attacked by phages [6], it is tempting to speculate whether these CRISPR-Cas loci may also be involved in the degradation of the host nucleic acids. Vampirococcus also encodes an enigmatic membrane protein, only shared by Absconditabacteria, composed of different domains that suggest that it may be part of a new type of electron transport chain. About half of the Vampirococcus proteins had no similarity to any protein with known function, so these two cases are examples of the huge genetic and functional novelty that remains hidden in the CPR genomes.

CPR bacteria are found in a vast variety of ecosystems, from underground aquifers to the human microbiome [3]. Different groups of CPR appear to be parasites of specific hosts, including Gram-positive (Saccharibacteria) and Gram-negative bacteria (Vampirococcus) and even eukaryotes [7]. Traditionally, the so-called top-down control of microbial populations has been attributed mostly to the activity of viruses and heterotrophic flagellates [8]. However, if, as we hypothesize, all CPR bacteria are parasites or predators as their reduced genomes suggest, they most likely play an important ecological role as a third element in this top-down control, especially in environments where flagellates, and even viruses, are not abundant [9,10]. 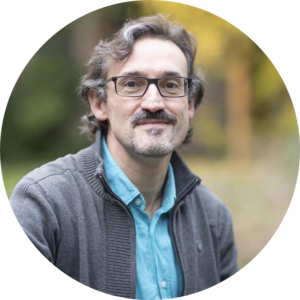