My project focuses on a signalling pathway called cell polarity, and how viruses subvert it during virus-mediated host cell takeover. So, when the COVID pandemic arrived in Australia and put Melbourne into several major lockdowns, I wondered if SARS-CoV-2 could be another virus that hijacked cell polarity for its replicative purposes? Interestingly, the related SARS-CoV-1 had already been shown to do so using the Envelope or E protein. With a sequence similarity of 96% per cent between SARS-CoV-1 and SARS-CoV-2, I pitched an experiment plan to my supervisor to find out, and he gave me the green light.

Many know the spike protein, as it is the reason for the coronavirus nomenclature and the protein that many vaccines are targeting for an antibody response [1]. But SARS-CoV-2 features four structural proteins namely spike (S), membrane (M), nucleocapsid (N) and envelope (E) [2]. The S protein, found in the virion envelope, serves as the attachment and fusion protein [3]. The M protein is the most abundant protein in the virion envelope and directs the virion assembly process [3]. The N protein is soluble and packages the RNA genome to form the nucleocapsid [3]. The E protein is the smallest of the structural proteins at 76–109 amino acids, but also the most mysterious [3]. But what is known is that the sequence identity of the E proteins SARS-CoV-1, SARS-CoV-2 and MERS-CoV are much higher than for the S protein, suggesting the potential of a target for cross-reactive T cells [4]. 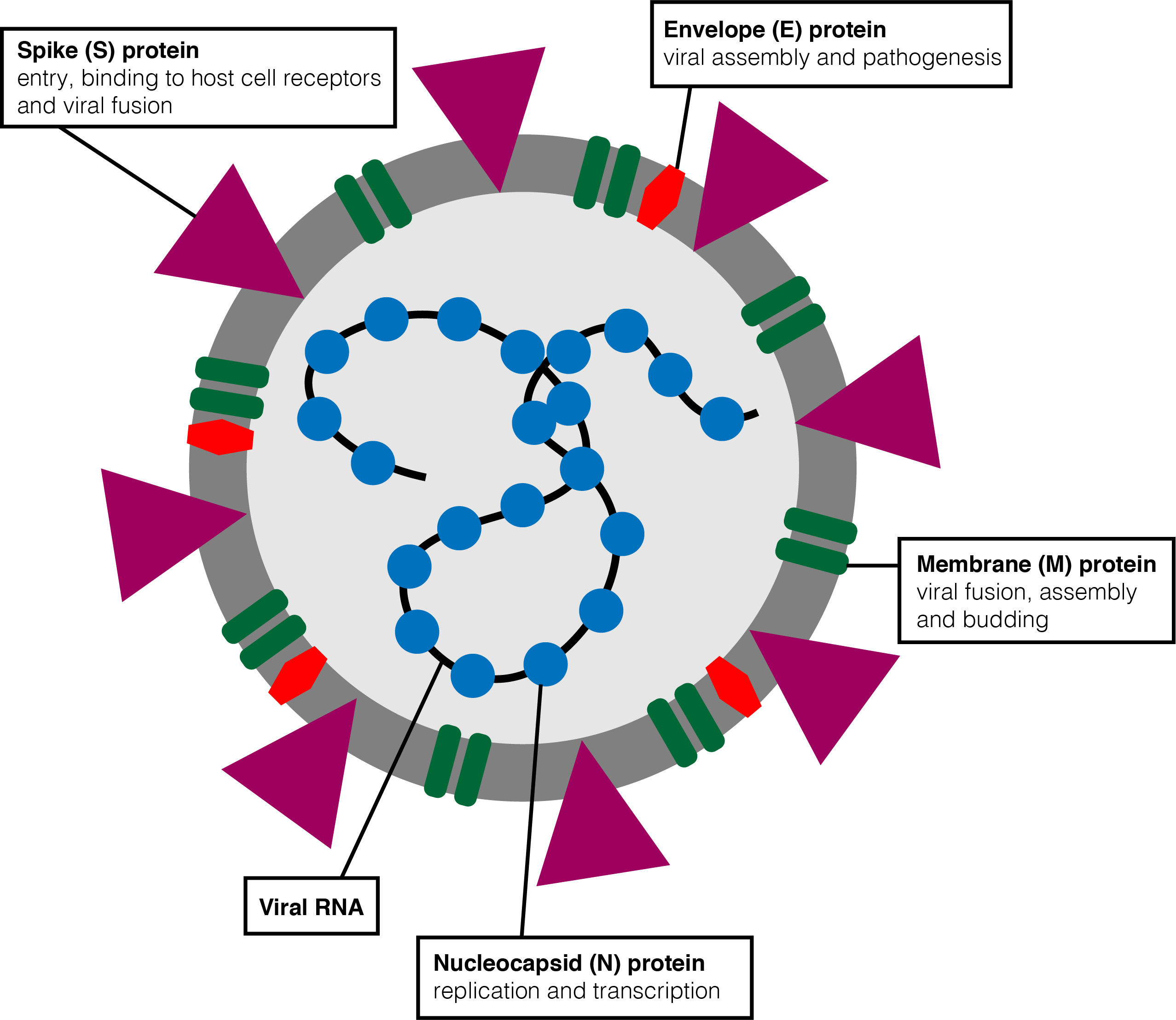 The E protein is abundantly expressed inside the infected cell during the replication cycle and the majority of E protein is localised at the site of intracellular trafficking via the ER and Golgi, where it participates in virus assembly and budding [5]. Recombinant coronaviruses lacking the E protein showed significantly reduced viral titres and incomplete virus maturation, thus demonstrating the importance of E protein in virus production and maturation [6-8]. Additionally, the E protein plays a role in virus pathogenesis and may act as a virulence factor [9, 10].

The E protein has a short 7-12 amino acid hydrophilic N-terminus, followed by a hydrophobic transmembrane domain (TMD) of 25 amino acids, then the remaining amino acids make a long hydrophilic C-terminus [3]. I was particularly focussed on this C-terminal tail, since it harboured a binding motif sequence that can bind to PDZ domains. PDZ domains are ~90 amino acids in size structural domains commonly found in signalling proteins [11], and are a major focus in my doctoral research project on cell polarity signalling. Importantly, the SARS-CoV-1 E protein’s PDZ-binding motif sequence allows it to interact with host cell polarity signalling by binding to the PDZ domain of PALS1, a component of an important cell polarity regulatory complex called Crumbs, which has been reported as a key target for SARS-CoV-1 to alter host epithelial cell integrity and signalling [12]. 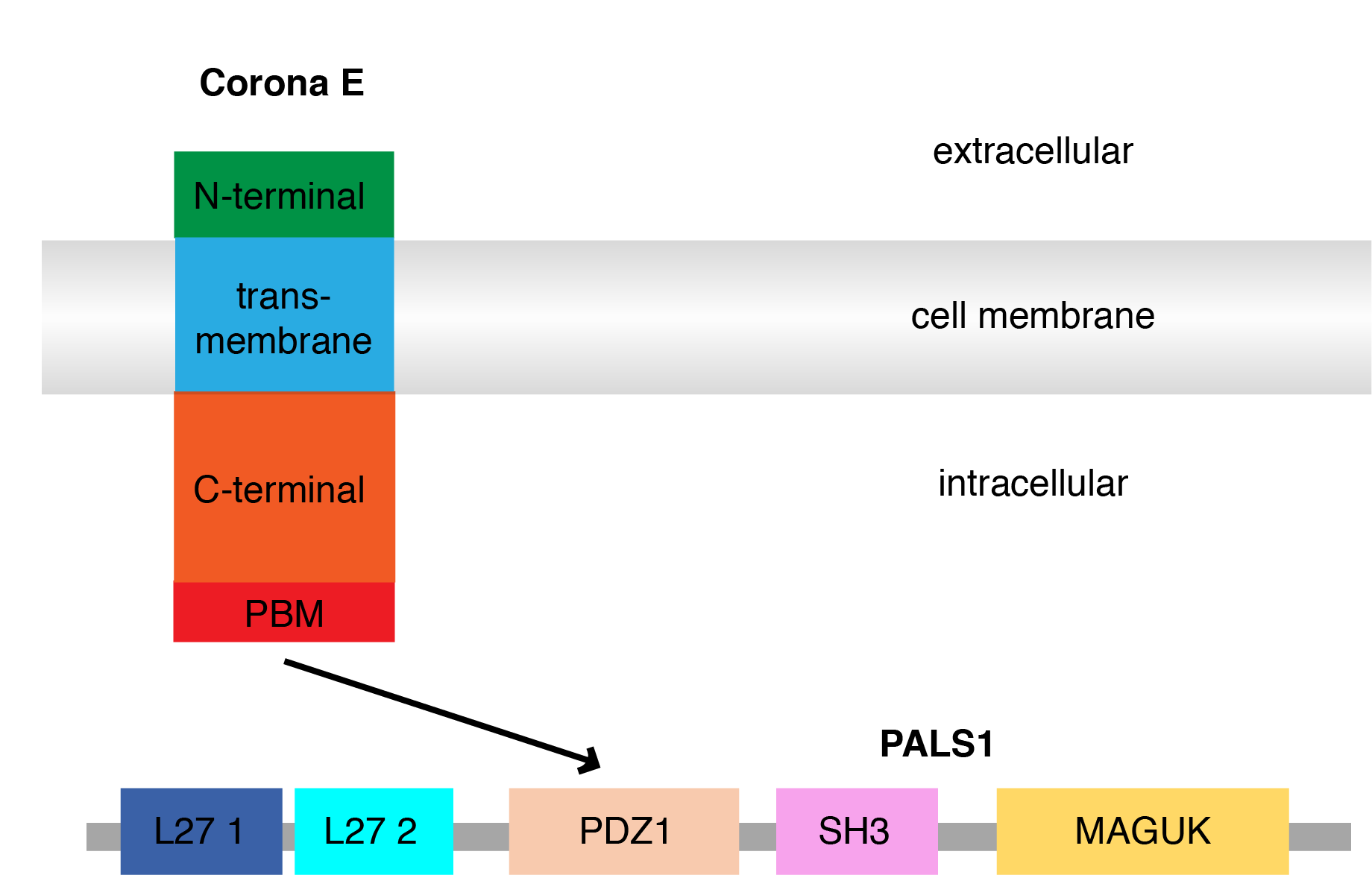 Cell polarity refers to the asymmetric distribution of biomacromolecules that allows a cell and tissue to orientate itself appropriately [13]. This process is reminiscent of how the earth is positioned upright due to its magnetic poles. PALS1 (Protein Associated with Lin7; also known as MPP5) is a signalling adaptor protein that consists several protein-protein interaction domains including a PDZ domain [14]. PALS1 regulates cell polarity through binding to the PDZ-binding motif (PBM) of endogenous CRB3 (a component of the Crumbs regulatory complex), with loss of PALS1 leading to disruption of cell polarity including loss of integrity of tight and adherens junctions [15-17], which are crucial to maintaining the integrity if epithelial tissues and control their permeability. This provides a clue as to how and why SARS-CoV would find targeting PALS1 to be advantageous in creating a more replicative submissive environment in epithelial cells, and to facilitate infection of epithelial tissues. 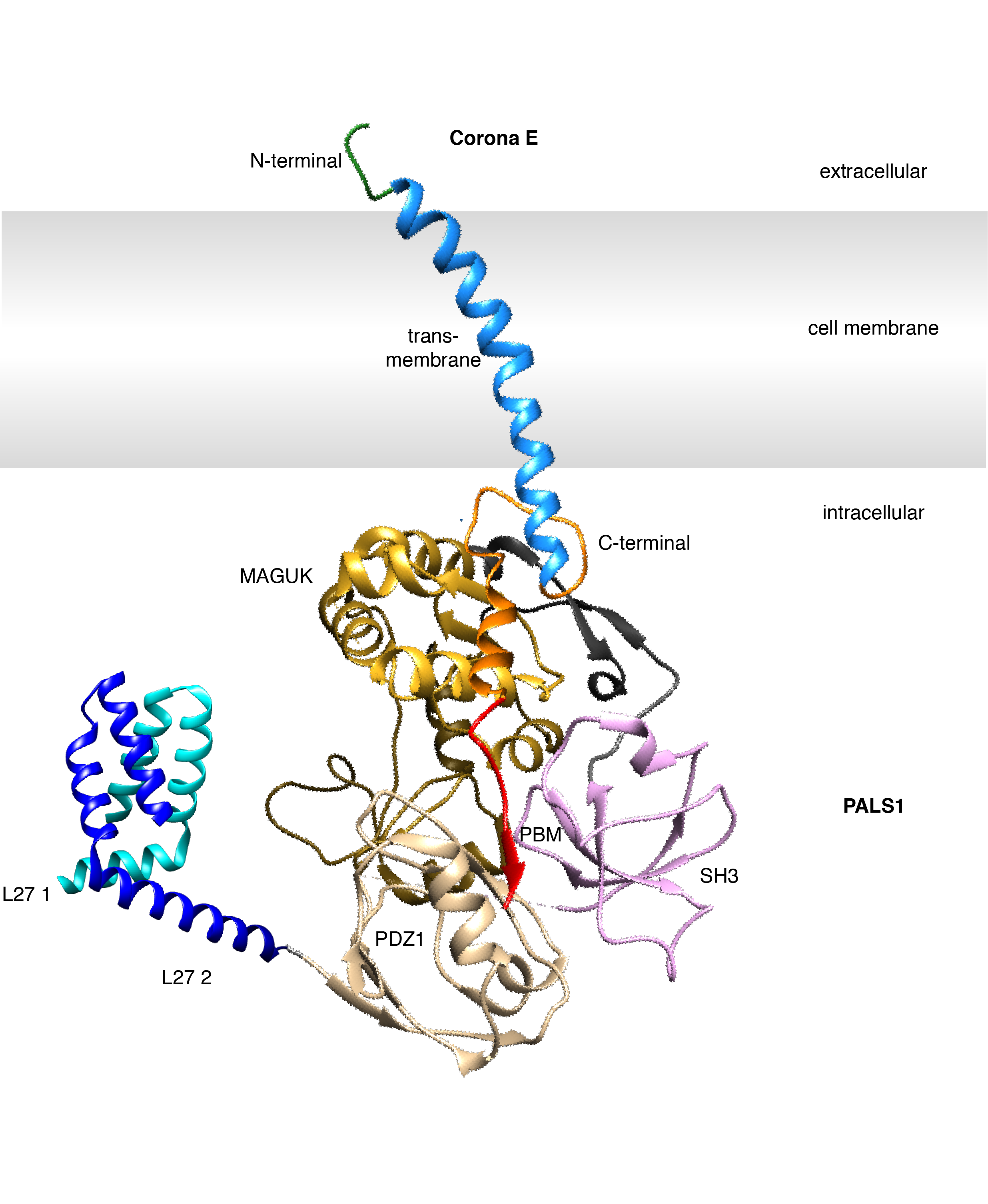 To get a better grasp of the nature of the interactions between E protein from different coronaviruses and PALS1, I measured the strength of their interactions, which revealed that whilst SARS-CoV-1 and SARS-CoV-2 E proteins’ PDZ-binding motif bound with comparable affinity, the E protein PDZ-binding motif from MERS-CoV did not bind at all. This was exciting, since it pointed to potential differences as to how MERS-CoV infiltrates and spread in lung epithelial tissues that had been observed during viral infection [18]. Using the technique of x-ray crystallography I determined structures of the human receptor for E protein, the PALS1 PDZ domain, bound to the PDZ-binding motif of E proteins from both SARS-CoV-1 and SARS-CoV-2. These structures showed in atomic detail how E protein binds to and hijacks PALS1. Together with the interaction measurements, they also provided a rationale why MERS E Protein does not bind to PALZ1 PDZ and suggested that CoV E proteins do not outcompete endogenous CRB from PALS1. This in turn would imply that the effect of perturbed polarity signalling may be due to the forced mislocalization of PALS1 to the site of virus budding at the GOLGI after binding to CoV_E. however I will need to do further experiments to see if this hypothesis is correct. 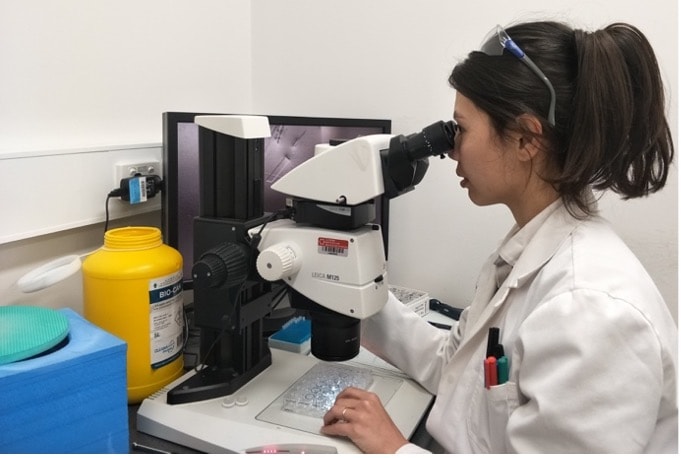 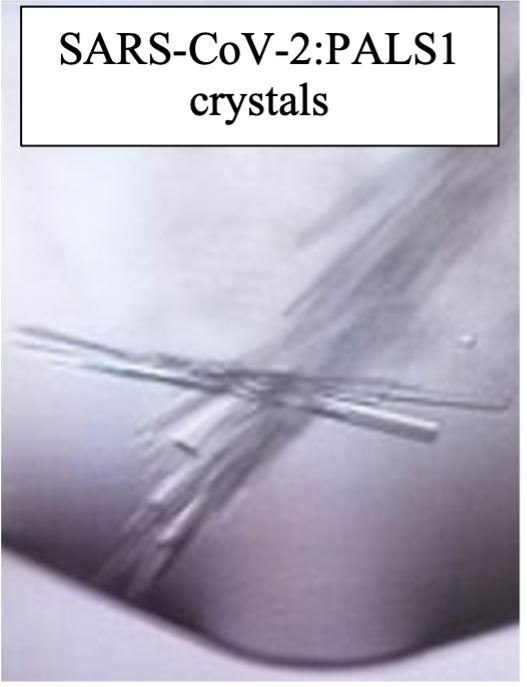 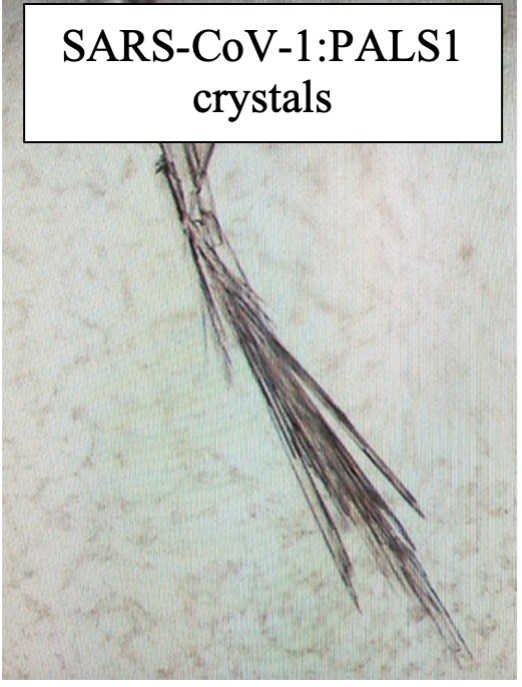 Fig.4 showing the crystals of SARS-CoV-1:PALS1 and SARS-CoV-2:PALS1 complexes with myself at the microscope.

Being able to see in atomic detail how the E proteins of SARS-CoV-1 E and SARS-CoV-2 hijack the PALS1 PDZ domain has now opened for me a window through which I can undertake detailed mechanistic studies to dissect how SARS-CoV-2 subverts polarity signalling. What I am most excited about though, is that my studies can now serve as the starting point for the design of drugs for antiviral therapy, and so provide another tool in our kit to tackle SARS-CoV-2. 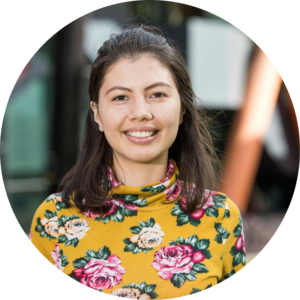