One of the fascinating aspects of studying interactions in microbial systems is the overlap of two distinct and apparently antagonistic impressions: we know so much about individual microbes but, at the same time, all of this knowledge appears insufficient to fully grasp the complexities of their interactions. This, it turns out, is vastly enhanced if we do not restrict ourselves to interactions between bacteria, but also with (or through) their own parasites. Bacteriophages use bacteria to replicate, acting as their predators in the process. Some of these bacteriophages, the temperate ones, can also lie dormant within the bacteria for many generations, waking up every once in a while (randomly or through certain cues), and killing their host, as well as the other unlucky bacteria that happen to be nearby. Paradoxically, this can actually be very useful, obviously not for the infected bacterium whose resident bacteriophage decided to wake up, but for its siblings. If they also harbour a similar – but still dormant – bacteriophage, they are likely immune to new infections. But other bacteria, potential competitors for valuable nutrients, might not be.

A lot of what we know about the individual aspects of interactions between bacteria, or between bacteria and bacteriophage, comes from simplified systems. For instance, by studying in detail the interaction of one bacteriophage with one bacterial host in a homogenous environment. This is an extremely useful approach, because it allows focusing on the specific bacteriophage-bacteria relationship without potential confounding factors. But simplifications can be a double-edged sword, particularly when transferring some of this knowledge into the natural context of microbial interactions. Perhaps homogeneous environments are not really the most representative context where these two entities co-occur. Or perhaps they are usually not alone, and more, different types of bacteriophages (or bacteria. Or yeast. Or all of these!) are often simultaneously present. If so, then unpredictable, and sometimes puzzling behaviours tend to happen. If before, in simpler conditions, bacteriophages consistently eliminate a bacterial population, maybe now some bacteria are able to survive at the end of the experiment. But only sometimes. And not necessarily because they became resistant to the phages. And thus, suddenly (and bewilderingly!), your experiments are not as reproducible as they were. And if instead of studying purely predatory bacteriophages you decided to look at those lifestyle-pondering temperate ones? Well, you can pat yourself on the back, because you just made your life even harder. 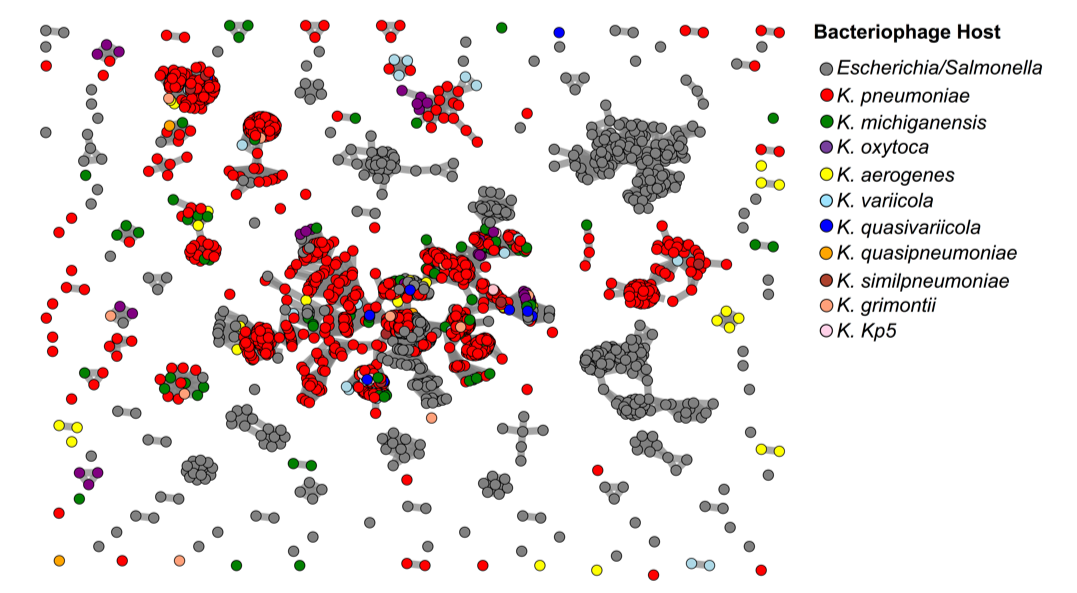 A network of genetic similarities between prophages in different species of Klebsiella and a random set of prophages from Escherichia and Salmonella. Each node represents a prophage, and a link between two nodes indicates that their genetic similarity is at least 50%.

But what do they do? And specifically, can they contribute to the ecological interactions between different Klebsiella strains? We wanted to characterize how the silent army of different prophages hidden within each of the 35 Klebsiella strains could impact the survival of the other strains (a total of 1225 pairwise interactions). It is not very feasible to study the effect of each of these bacteriophages in each different strain, but then again, that is not what we wanted. Whatever the prophage-mediated interactions between Klebsiella strains, they will be a consequence of using the entire silent army at once. In other words, all of the prophages that can be induced from a single bacterium will be induced simultaneously. And to capture the variation in this process, our approach focused on representing (three) independent face-offs between “bacteriophage-wielding” Klebsiella strains. This resulted in A) many plates, and B) the interaction matrix below. 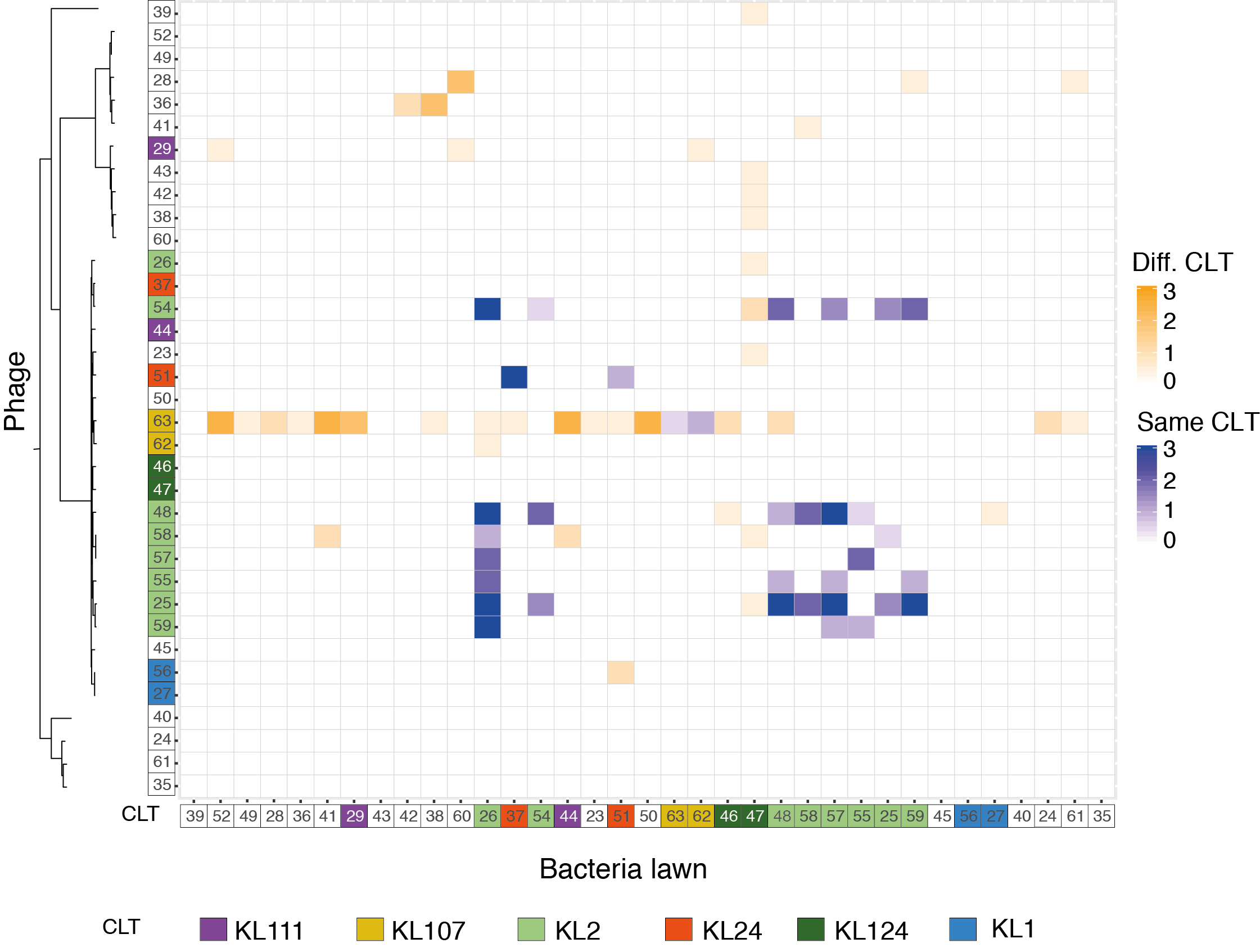 The matrix of competitive prophage-mediated interactions between 35 Klebsiella strains. The phage axis represents the bacterial host from which the bacteriophages are induced, whereas the bacterial lawn axis represents the strains exposed to those bacteriophages. Along the axes, the numbers represent the different strains, and the colours indicate the predicted capsule serotypes (CLT). Color intensity in the matrix indicates how many times each phenomenon was observed.

Our first reaction to this matrix was (and we quote), “that is a lot of blank space!”. The second one was, “wait, why are some of these interactions not reproducible across replicates?”. At first glance, neither seems particularly positive, but they were both very intriguing. And it turns out that they are even potentially related.

Contrary to their peers (for instance prophages in Pseudomonas aeruginosa), Klebsiella prophages do not seem to be able to infect hosts that are that much different from the bacteria where they live (hence all the “blanks” in the matrix). However, and importantly, “different” here does not necessarily mean genetically. Instead, it means “with a different capsule”. The capsule is the most external layer to Klebsiella cells, and its variation in sugar composition results in different serotypes. Up until now, the capsule was thought to help bacteria escape from bacteriophage infections. But what we observe is that these bacteriophages seem to have an affinity towards specific capsule compositions, so they tend to preferentially infect bacteria with the same serotype as its previous host (even when the bacteria are genetically dissimilar). And if there is no capsule at all? We saw that bacteria that are not capsulated are also resistant to infection by these bacteriophages. Not only that, but when capsulated bacteria are exposed to bacteriophages, there is a very strong selection of mutants with inactivated capsules.

The capsule is an interesting component of Klebsiella that we do not fully understand. But we do know that it is often stochastically expressed [2] and potentially concentrated in patches across the cell membrane [3]. If bacteriophages require the presence of the capsule to infect, then two repeated processes of infection with the same bacteriophage might not necessarily have the same outcome. Assuming, of course, that the “right” bacteriophage (the one that is responsible for infection) is even present at sufficient numbers… which is not a given, if we consider that several different prophages can coexist in the prophage army that is released from a single bacterium.

It is not often that the answer to anything that involves “disentangling complexity” is adding even more complexity, but that might be the case here. The full scope of the influence of temperate bacteriophages in the ecology and evolution of Klebsiella will benefit from studying more strains, particularly because most of the sequenced ones are from clinical samples, which is only a fraction of the ubiquitous presence of Klebsiellaacross environments and hosts. And why are multiple prophages released from the same bacterium? Well, maybe that answer to that one can only be found when challenging multiple hosts simultaneously.

By the way, did we mention that these bacteriophages can also lead to exchanges of DNA between bacteria? Because, yes, there is also that... Welcome to the prophage jungle, we’ve got fun and games! Straightforwardness, it turns out, not so much. 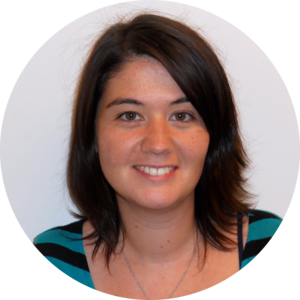