Understanding the time elapsed since the introduction event of an emergent pathogen may provide clues to estimate epidemiological parameters that help control disease spread and make right policy decisions...

Our paper illustrate how this is especially true in the case of quarantine regulated pathogens such as Xylella fastidiosa (Xf), likely the public enemy number one for the European Plant Health. Soon after the detection of Xf in Majorca (Balearic Islands, Spain) in October 2016, eradication measures were hasty implemented in compliance with the Decision (EU) 2015/7892 without considering whether the pathogen could have been for a long time established in the island. Certainly, the time of introduction matters because it influences on the pathogen’s population size, as well as on its geographic and host range and, thus, on the likelihood to eradicate or contain it.  Although it is understandable the urgencies, the implementation of such eradication measures could have worsen the impact of Xf on the landscape. Fortunately, that did not happen.

As a plant pathologist specialised in Oomycetes (Phytophthora and Pythium), I was invited by the Plant Health Service of the Balearic Islands to study a lethal dieback of almond trees at Son Carrió (east of Majorca) in the summer of 2010.  After uprooting several trees, it became clear that no root pathogen was implicated in the disease. Instead, an assortment of trunk fungal pathogens was isolated from branches and shoots showing canker, internal wood necrosis, etc. associated with the disease complex1. Unconvinced with the explanation of the fungal nature of the disease, I reviewed the literature of almond diseases worldwide. Although none known disease fitted exactly our almond decline,  it had some resemblance with the almond leaf scorch disease (ALSD) caused by the bacterium Xf in California. This was my opinion.

In 2010 concurred other personal events. My mentor Dr. Enrique Descals retired and subsequently the lab at my former institute IMEDEA (CSIC-UIB) was closed, while I gained a permanent position for a job that has nothing to do with research.  So, seven year later, when in January of 2017 I heard in the media that Xf had been detected in Majorca, I immediately knew that the bacterium was behind the almond tree disease that already had spread across the island.

Was Xf the causal agent of the huge mortality of almond trees in Majorca or a new pathogen added to fungal trunk pathogens? For how long had been Xf in Majorca and how it was introduced? Soon after its detection, Dr. Blanca Landa determined the genetic profiles of the strains using Multilocus Sequence Typing (MLST) from infected plant extracts. These analyses revealed that two sequence types were found in Majorca, the ST1 of the subspecies fastidiosa which is responsible both for the Pierce’s disease in the USA and ALSD in California, and a ST very close to ST6 (subsp. multiplex) which is also responsible of ALSD in California. With this information, in an open letter published in the local press (Diario de Mallorca, 03-21-2017), I urged that the above questions needed to be solved if we wanted to understand the magnitude of the impact of Xf on the island landscape.  I also predicted that Xf would be behind the almond mortality and thus the disease was actually the ALSD, and (ii) that in the summer we would find Pierce’s disease on grapevines. So it was, nothing of merit when the cards are marked.

A main consequence of the almond disease in Majorca is that Xf would have arrived to Europe much earlier than the first official detection on olive trees in Apulia, Italy2. Yet, how could it be demonstrated? Although I was very interested in investigating this issue, I had no lab where to work in. My former colleagues Drs. Ramon Rosselló, Joan Pons and Jorge Terrados from the IMEDEA (CSIC-UIB) kindly offered support to the initial idea of extracting DNA from infected plant material to compare fragments of Xf genomes from Majorca with published whole genome sequences of isolates from California. Three weeks later, I was invited to use the Plant Health Service lab facilities, so we discarded to use DNA extracts from plants and instead put our efforts to obtain a large number of Xf isolates from infected plant material. Of course, the challenge was enormous for a mycologist who had never before worked with bacteria; not any bacteria, a fastidious bacterium. So between May and June every afternoon after work I spent my spare time and holydays trying to achieve the isolation of the bacterium from qPCR positive plant samples. The 30th of June I received a phone call from the lab when I enjoyed a short break in Almeria: the DNA extract of a candidate Xf colony sample was qPCR positive. We got it.

All scientist reminds those eureka moments that mark the step to a striking finding. In May 2017, my colleague Dr. Diego Olmo from the Balearic Islands Plant Health Service in a conference in the University of the Balearic Islands told us that they could consistently detect Xf by qPCR from wood samples. On the time being, I was reading some papers about Xf movement within the host3, and about the wood anatomy and water uptake of almond trees. I was interested in comparing differences in the growth-ring width between Xf infected trees and non-infected trees along a time series with the hope to estimate the time of infection and thus reconstruct the ALSD in Majorca. Deciduous trees like Prunus dulcis form new xylem tissue every spring connecting the new leaves with the vascular system. Because almost all water flux from roots to the canopy occurs in the outmost rings, I assumed that Xf cells would colonize the new vascular tissue formed in the spring, while the dead bacterial cells would be left behind in last year’s wood (Figure 1).  Therefore, growth rings could be used in the same manner as sediment strata are used in palaeontology to date the fossils. Xf-DNA was our fossil record that could be detected by qPCR if we took precautions to avoid cross contamination when extracting the sawdust form the rings. 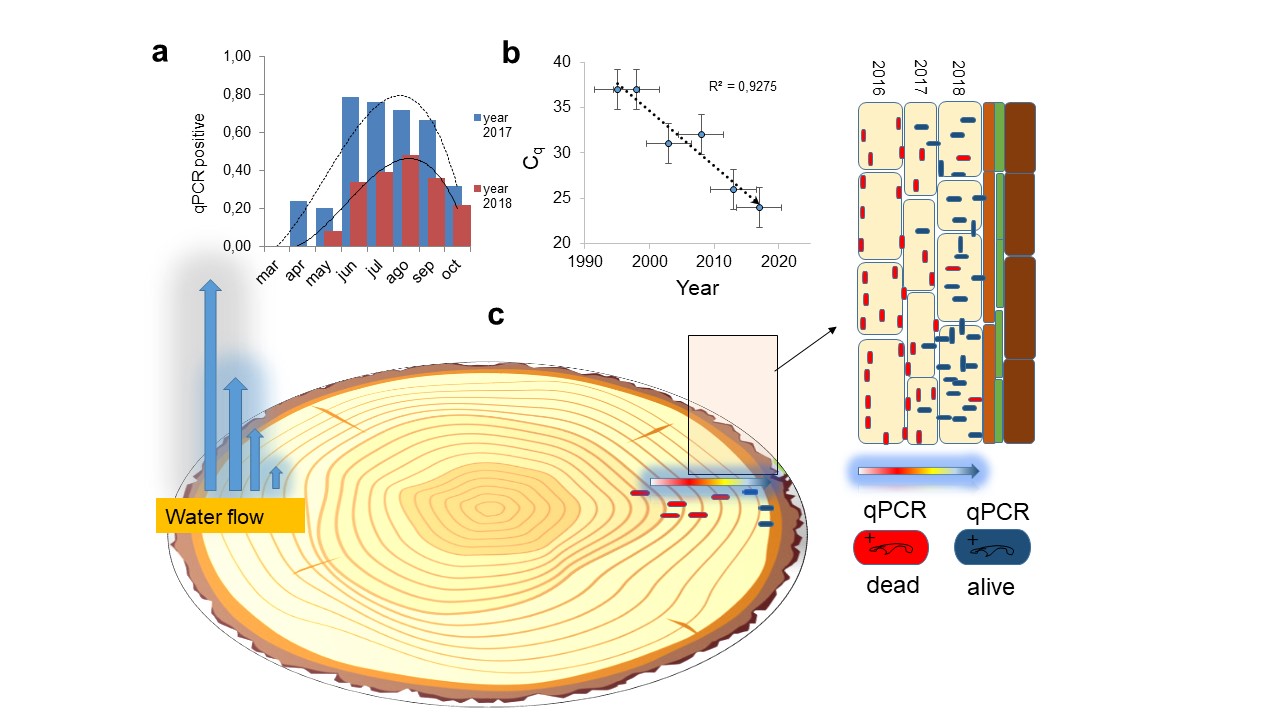 Figure 1. Conceptual model explanation of Xf movement within the wood of infected almond trees. a) Trend of the annual colonization of xylem spring vessels in already infected trees obtained indirectly by calculating the frequency of almond samples that were qPCR positives throughout the year. Every new spring Xf colonizes the newly formed xylem vessels towards the cambium accumulating bacterium load. This is reflected in the relationship between Cq and date of the tree rings (b), which decreases from the pith to the cambium. (c) The bacterial directional movement is driven by the gradient of water flow and nutrients limited to the most external rings. Xf DNA is detected both in dead (red rods) and alive cells (blue rods) by qPCR but only living cells colonize the peripheral youngest rings.

The dating of Xf-DNA in the growth rings of almond trees made other pieces of the puzzle fit. We now could estimate with high confidence the time from infection to tree decrepitude (survival time). Surprisingly, this time lag was longer than previously reported, confirming that the massive almond mortality in 2010 observed in repository images from Google street view was very likely the consequence of Xf spread 14-years before. On the other hand, we could obtain a rough estimate of the disease incidence over time by calculating the frequency of Xf infections each year on the rings (1988-2018) taking representative samples from the almond population. However, dating of Xf-DNA in the growth rings showed its greatest power in providing a minimum age bound of the Majorcan clade for inferring lineage-divergence absolute ages from its source population in California. This was necessary because our dated-tip sequences only spanned a 3-year series for Xf European isolates, not enough to calibrate precisely the molecular clock. To our best knowledge for the first time paleontological (i.e. dendrochronology) methods have been applied to investigate phylogenetic divergence time analyses of a plant pathogen.

The two Xf strains that cause ALSD and Pierce’s disease have been established since around 1993 in Majorca confounded with other diseases and drought symptoms. Our findings have far-reaching implications in the risk assessment and control strategies for Xf in Europe, as well as other Mediterranean and Near east countries. Find it out here https://www.nature.com/articles/s42003-020-01284-7. 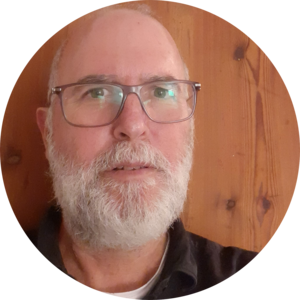