How do viruses enter cells?

Our ground-breaking discovery of a portal-like assembly in feline calicivirus following receptor engagement not only provides the first structural and functional data on the calicivirus minor capsid protein, VP2, but also presents a model for the mechanism of genome delivery and endosomal escape potentially employed by many other RNA viruses. 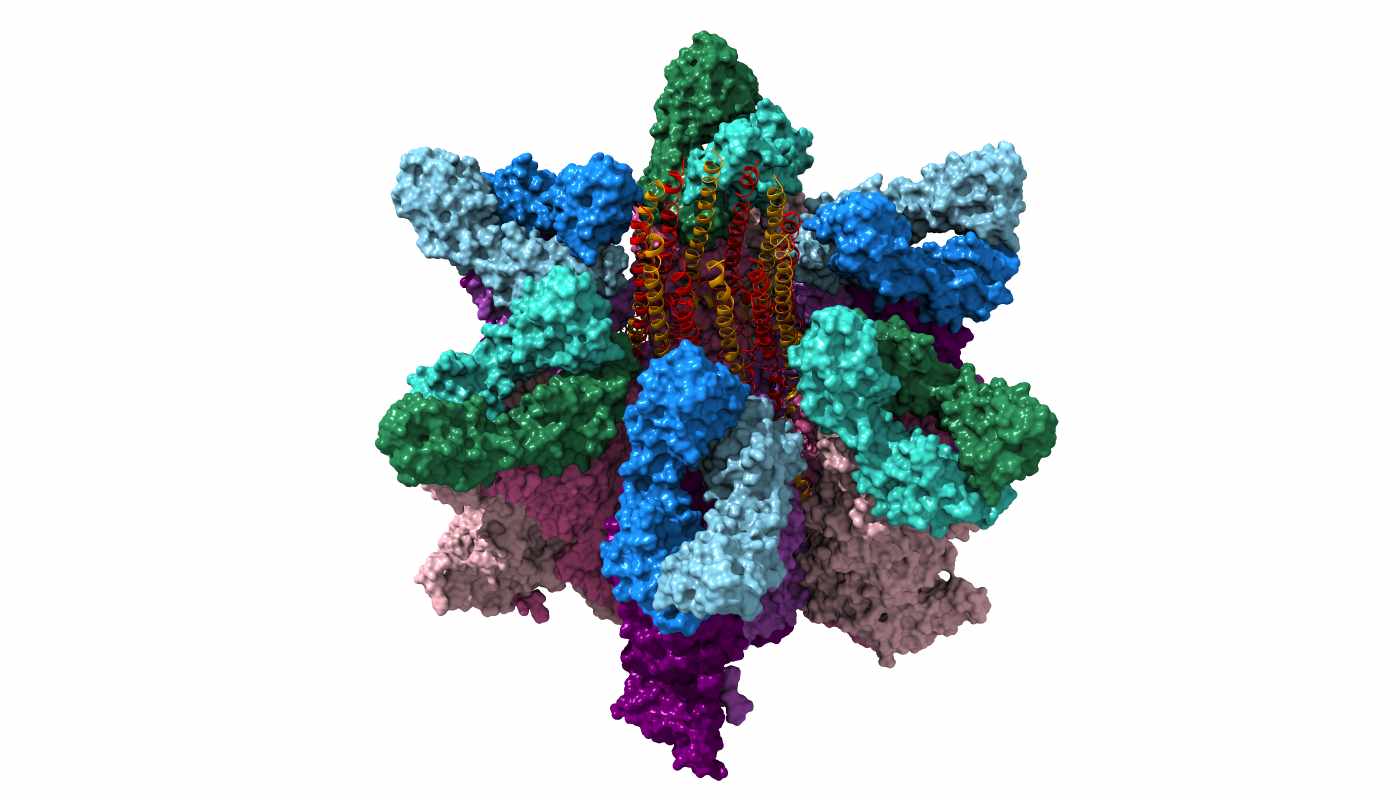 Asymmetric reconstruction of feline calicivirus bound to the receptor feline junctional adhesion molecule A revealed the presence of a portal-like structure at a unique three-fold symmetry axis. The VP2 assembly is shown (orange and red) in the centre of the surrounding VP1 (pink and purple) and fJAM-A (green and blue) proteins.

My interest in virus entry was first piqued when during my Masters study at the University of Leeds, Dr David Bhella (University of Glasgow) gave a seminar on his work. He presented data on feline calicivirus (FCV), a virus related to norovirus, which is used as a tractable model for the study of the Caliciviridae. The receptor for FCV is feline junctional adhesion molecule-A (fJAM-A) and Dave was interested in the interaction between the virus and its receptor during virus entry. I was subsequently awarded a BBSRC Doctoral Training Programme position at the University of Glasgow and so at the Microbiology Society annual conference I plucked up the courage to talk to Dave and ask if he was on the supervisor list for the DTP, which he wasn’t. This led to discussions about potential projects and he contacted me shortly afterwards to inform me that he had registered as a supervisor on the programme. As daunting as it is, especially for young researchers, this highlights the importance and potential of networking! I jumped at the chance to undertake a 3-month rotation project in Dave’s lab and learn cryo-electron microscopy and other biophysical techniques. During this period, I worked closely with Dave on the FCV project and was immediately hooked on both cryo-EM and virus entry.

The primary aim of the project was to continue the structural characterisation of the interface between the FCV major capsid protein VP1 and fJAM-A. I started my project by performing cryo-EM and 3D image reconstruction of FCV alone and in complex with the soluble ectodomain of fJAM-A, over a range of pH values. The aim being to investigate whether the structures differed from their neutral pH counterpart. At neutral pH, the VP1 capsid spikes of FCV were shown to rotate counter-clockwise following receptor binding 1,2. To our surprise, upon imaging FCV bound to fJAM-A at pH4 or below, no intact virus particles were visible, despite the undecorated virus remaining intact at the same pH.

At a Microbiology Society meeting later that year, we learned of an ingenious assay employed by the Stonehouse group at the University of Leeds. The assay used a nucleic acid binding dye to measure RNA release from virions following heating 3. We quickly set about modifying the assay to analyse the effect of pH rather than temperature. This immediately confirmed our previous findings that RNA is released from FCV virions at low pH, but only in the presence of fJAM-A. We went on to test the minimum ratio of fJAM-A:VP1 needed to cause release of the viral RNA at low pH, as this was likely preceded by the conformational changes previously observed by cryo-EM.

At the point of submitting my thesis, the analysis of the VP1-fJAM-A structure remained frustrating, due to the flexibility in this part of the complex, until Dave applied a novel single particle analysis technique which involved analysing each of the VP1 spikes rather than whole particles and looking for any asymmetry that may be present. I had since taken a post-doctoral position in the laboratory of Prof. Sheila Graham and was surprised one morning to see that Dave had trekked across 4 buildings on campus and was knocking on the tissue culture door, urgently trying to find me. His words were along the lines of ‘come and look what I’ve found, it’s so cool’. He led me back to his office where a long and excited discussion ensued as we looked at reconstructions showing what we now know to be the VP2 portal. It was such a surprise as Dave was just doing the asymmetric reconstruction to improve the different classes of VP1 spikes. We never expected to find VP2 never mind find the potential gateway from the endosome into the cell!

By the time of my viva in December 2017, we had a preliminary structure of the VP2 portal which I was able to show my external examiner Prof. Neil Ranson (University of Leeds). Word soon spread among collaborators and we were advised to ‘get it submitted to Nature, now!’. We were unsure of how the impact of our work would be judged, as the study involved a cat virus. Our work seemed to catch the imagination of colleagues however, encouraging us to aim high. The work was met with equal enthusiasm by the editors and reviewers at Nature!

This story shows that networking, hard work and the openness to new techniques/applications can lead to ground-breaking discoveries from the unlikeliest studies. They could even be career changing!

Check out Dave Bhella’s post, ‘Breaking the shackles of symmetry to study calicivirus endosome escape. The senior scientist’s perspective’ to find out more about his experiences with the project and the application of asymmetry in cryo-EM.